With each successive RPG, Konami has gotten bolder and braver.

You are 15 years old. You are now of age to take on the role of "monster tamer," a position your late father once held. In fact, your father was considered the greatest monster tamer in all the land. Your family name is legendary, and you have a lot to live up to. Your destiny is to enter the Demon Tower and retrieve the eggs of rare and exotic creatures, which you will then breed for companionship or to sell to the highest bidder. Such is the premise of Konami's newest RPG, Azure Dreams.

In the case of Konami, credit must be given where credit is due. Up until the time of the second generation of 32-bit games, RPGs had remained largely on the outskirts of most gamers' tastes. It was a niche market defined by superdeformed characters, idiosyncratic Japanese overtones, and a sword and sorcery prerequisite that intimidated the average consumer. While 16-bit titles such as Chrono Trigger, Final Fantasy III, and Super Mario RPG had been relatively successful, they were hardly selling as well as games like Mortal Kombat or Madden 93. So upon entering the 32-bit market, RPG fans had very little to choose from - Mystaria for the Saturn, Beyond the Beyond for the PlayStation, Shining Wisdom, and so on. So, while most people credit Final Fantasy VII for opening the floodgates for the impending wave of RPGs, it was really Suikoden that laid the groundwork. Despite its lackluster graphics, Suikoden's rich storyline and lengthy quest appealed not only to hard-core gamers, but to the novice role-player as well. It was so successful that Konami decided to translate its other 32-bit RPG, Vandal Hearts, almost immediately after Suikoden's release. Now, after the face of next-generation gaming has been permanently altered by games like Wild Arms, Persona, Dragon Force, Tactics Ogre, and Panzer Dragoon Saga, Konami has decided the time is right to release its most bizarre RPG to date.

Azure Dreams places you in the town of Monsbaia, where you assume the role of a youthful monster tamer, who, on the day of his 15th birthday, is eligible to enter the Demon Tower and search for monster eggs. The eggs that you collect may either be sold or hatched. If you choose to hatch them, you can then take these familiars into the tower with you to aid you on your journey. The higher in the tower you go, the more difficult it becomes to progress, but the eggs you will find will contain rarer and more exotic monsters. Monsters can later be fused into stronger creatures, which can be of great assistance later in the game. Unique to this sort of "monster ranching" is that the AI of each monster can be altered at any time during the game. For example, you can elect to have your monster travel behind you at all times, protecting you from attacks at the rear, or, you can choose to have the creature walk in front. You can also dictate whether it attacks enemies directly, remains on guard, or magically powers up your weapons with each attack. Unlike other turn-based RPGs, the fight sequences in Azure Dreams occur in real time, which gives the game a Zelda-esque feeling at times. As a result, the flexibility in the system is limited only by your own preferences, as the options are numerous. Another feature that keeps the game fresh is the random map generator, which creates completely new dungeon layouts each time you enter the Demon Tower. Your quest won't be short, however, since the Tower contains up to 90 different levels.

Once you attain a certain level of success from your monster-taming endeavors, you will be able to buy items that will enhance existing structures, while creating entirely new buildings as well. You'll be able to install a new theater, horse racing track, bowling alley, casino, and library, while improving your house, the hospital, and your monster hut, among others. You'll even be able to equip the interiors of practically any building with exercise machines, rugs, TVs, washing machines, etc. How you build up the town will go a long way towards influencing how much the residents like you.

During the game you will encounter a number of residents who will ask you to use your increasingly legendary prowess to help them with certain problems they might have. These miniquests add a large amount of variety to an already nonlinear game. With over 50 monsters to discover on over 90 different levels, Azure Dreams provides a considerable amount of replay value.

Graphically, the game is a bit rough. While characters are sprite-based, the backgrounds are fully polygonal and can be rotated 360 degrees. While the backgrounds look solid enough, the characters and monsters look really pixelated. Combined with a distracting method of providing transparent walls when traveling in the dungeons and a slightly awkward overhead view, Azure Dreams can be described as messy - colorful, but messy. Additionally, no one in the game has a shadow. Since this isn't an action/platformer, it doesn't cause any real problems, but it's a distracting detail nonetheless. The sound effects in Azure Dreams are functional, and while the soundtrack won't appeal to everyone, it manages to get the job done.

In all honesty, it's a surprise that Konami even brought Azure Dreams to the US. Its main character looks like a cross between Edward Scissorhands and Ronald McDonald and has a sarcastic attitude that's a far cry from most of today's cookie-cutter heroes. With each successive RPG, Konami has gotten bolder and braver. With an ever-increasing respect to the original Japanese source material, Konami has translated what could truly be termed a niche RPG. Straying from any conventional formula, Konami has created an RPG that's equal parts SimCity, Monster Rancher, and role-playing game. With a heartwarming story of discovery and companionship to boot, Konami has struck RPG gold again. Third time's a charm, apparently. 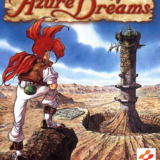 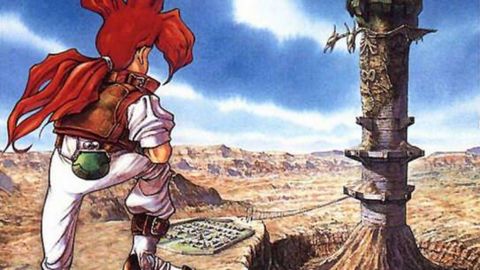 With each successive RPG, Konami has gotten bolder and braver.