At some point in your life, you wake up in an unexpected place. You open your eyes, and for a split second, confusion takes over. You may be on your couch after a sleepy night of watching bad television, or, you may find yourself in bed next to a stranger in a room you don't recognize. But, what are the odds that you'll ever wake up in a different world?

Axiom Verge is your chance. Following an experiment on Earth gone horribly wrong, you wake up in a strange place known as Sudra. It's a world unlike Earth, where strange biological formations meld with mechanical contraptions to form massive structures. Being inexplicably transported to such a place would rock most people's psyche, but the protagonist, Trace, barely bats an eye. It's weird that he doesn't collapse in shock, honestly, but this misstep doesn't detract from the fact that Axiom Verge's plot is so good at drawing you in with heavy doses of mystery and intrigue. These moments kick off when large mechanical beings known as the Rusulka enter the picture. They act as guides, providing directions in exchange for repairs (something has left them in disarray), and insight into Sudra's troubled history. I'd love to go into greater detail, but to describe the relationship between you and the Rusulka any further would spoil one of the best aspects of Axiom Verge's world. It's a world that emphasizes exploration in the same vein that Super Metroid or Castlevania: Symphony of the Night do, but it's also a quest for knowledge that keeps you guessing until the very end.

As you make your way through Sudra's foreboding world at the behest of the Rusulka, you encounter numerous types of imposing wildlife. The only bad thing that can be said of the enemies in the game is that you occasionally find one that feels out of place, and this small inconsistency is one of a mere couple issues with the game, neither of which are important enough to detract from your enjoyment in a significant way. Big or small, Axiom Verge's enemies command your attention with wildly varying behavior and impressive displays of force. Some let out ear piercing battle cries while slashing at you with great speed, while others use more creative means to attack, such as spewing swarms of energy leeching bugs that are difficult to shake. It takes time and practice to learn how to deal with the trickier enemies, but you quickly gain new weapons as you explore, and thus new methods to defend yourself become available.

Your primary weapon, the Axiom Disruptor, fires simple energy-bullets, but you quickly rack up augmentations that make it capable of delivering shotgun-like blasts of electricity, or a beam of current not unlike what you might see in a Ghostbusters movie, for example. With more than a dozen weapons to find, you have to spend a lot of time searching for each and every one. While you don't need every weapon to be efficient at blasting away enemies that stand in your path, you learn to love many of the weapons over time, and who doesn't like having options?

There are other tools to discover that make navigating Sudra manageable, let alone possible. A laser drill lets you plow through rock (and some tough-skinned enemies), revealing new pathways and potential secrets. You eventually find a grappling hook that turns you into a veritable Bionic Commando, allowing you to bridge large gaps and swing across ceilings. Like in Metroid, you can sneak through small tunnels that you find, but not by morphing into a ball. Rather, you find a drone that can do the exploring for you. It has its own life bar and some modest firepower, and while it's out and about, you get to rest inside an impenetrable force field. A quick press of a button, and the drone dismantles itself before zipping back to your location. Eventually, it becomes a remote teleportation device, allowing you to warp to its location.

One tool stands out as the most special of the lot: the Address Disruptor. This device can corrupt enemies or repair garbled matter, which has many implications and uses during your adventure. Sometimes, firing it at glitchy matter will yield a new platform that will help you get to a new location, while other times it can clear a path. The most interesting application, however, is using it to transform enemies. Every enemy has a different reaction to the Address Disruptor, and it's critical to pay attention to the particulars therein. An enemy that spawns laser firing bugs may suddenly spawn life energy once you've corrupted it, while another may start to gnaw away at rock, which you can use to your advantage when trying to access hard to reach areas. There are dozens of different behaviors associated with the Address Disruptor, and it's easily one of the most interesting weapons or tools that I've ever seen in a game.

One enemy's reaction in particular leads me to talk about the game's password system. Within the inventory and map menu lies a place to input passwords. Passwords can trigger different things, such as changing your outfit or allowing you to read previously indecipherable texts. All of the info in the documents you find are supplements to the story, but they also stoke your curiosity to dig deeper into the mysterious events of the past and present. Passwords aren't just given out, you need to work to find them. In one case, a hard to reach document contains a translation string, another reveals itself when you use the Address Disruptor on a glitchy area of the map. My favorite, and the basis of this segue, is the enemy that reveals a code, letter by letter, after it's been corrupted. This particular enemy is only in one room, and even though there are others like it to be found on the map, it only provides a password in this particular instance. Moments like this are when you realize that you must use every tool at your disposal if you hope to uncover all of the secrets that lie within Axiom Verge. It takes a lot of work to find some items, but you get a real sense of accomplishment when you overcome difficult situations by combining your skills in clever ways.

Part of the reason you want to find secrets and secret areas is because you may gain a new weapon or ability, but also because your speed, map coverage, and item percentage have an impact on the game's ending. No matter what, Axiom Verge's final third will satisfy your curiosity and surprise you, but you learn more about Trace if you get through the game with efficiency and an attention to detail.

Accomplishing everything it takes to get the absolute best ending isn't easy, especially your first time through. It took me the better part of 14 hours to get through to the end, and even with all of that time, I only uncovered 92% of the map and found 70% of the items. It's not an impressive run by any measure, but it would have been far worse if Axiom Verge punished you for every death, which I experienced dozens of during the course of my journey. Thankfully, dying only sends you back to the last save point on the map with all of your progress kept intact. While this may mean that you're teleported back a significant distance across Sudra, any milestones you've hit are preserved, meaning you don't need to waste precious time repeating previous efforts.

Speaking of repeating previous efforts, once the credits finished rolling, I couldn't wait to jump back in and start Trace's journey all over again. Some games conclude and I'm happy to walk away, but Axiom Verge is such a joy to play, with dozens of tools to play with, and too many secrets to find. The skills and rules you learn inform your expectations and plans, and my second trip through became more about the gameplay than the story, which isn't entirely a bad thing. After all, the better I play, the better the payoff in the end. I'm still working through Sudra for the second time, occasionally going back to my first save to identify things I may have missed so that I'm prepared when I encounter them again.

Axiom Verge is a game that's easy to fall in love with because it hits so many high notes. It takes the Metroidvania model and adds layers of ingenuity that are in a league all of their own, the most notable being the Address Disruptor. Yes it's occasionally drab looking, and some enemies may not fit in with the rest of the world, but when a game is this good, these blemishes quickly fade into the back of your mind. The chilling sci-fi setting, mysterious plot, and a seemingly endless number of abilities keep your mind busy, and your curiosity at fever pitch. It's not a stretch to say that Axiom Verge is better than the games that inspired it, because it's so inventive and thoughtfully crafted. There's no excuse to hold onto the past when the present is this amazing.

GameSpot has updated the score to reflect our experience with the Nintendo Switch version of Axiom Verge. - Oct. 5, 2017, 9:00 AM PT

View Comments (175)
Back To Top
8
Great
About GameSpot Reviews 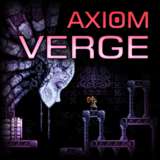