If you're in love with the grit and grime of dirt racing, and don't mind a challenge, then Blazin' Trails should be right up your alley.

Though still in its infancy, the PSP was blessed with a number of top-notch racing games at launch. ATV Offroad Fury: Blazin' Trails is the first off-road racing game for the Sony handheld. While the single player mode tends to be frustrating, the game combines fast four-wheel action with one of the most feature-rich online multiplayer modes we've seen on the PSP. If you're in love with the grit and grime of dirt racing, and don't mind a challenge, then Blazin' Trails should be right up your alley.

The first thing that will probably strike you about this game is its difficulty. Unlike many racing games (heck, unlike most games in general) that start out easy and gently ramp up the intensity as you progress, Blazin' Trails' single-player championship events--of which there are 14 to choose from--start out challenging and don't let up for a moment, even on normal difficulty level. This is partially due to some newly tweaked, and far less forgiving, physics that put an absolute premium on jump strategy. Unlike other off-road racing games, which tend to be forgiving in terms of how you approach a jump, how much you preload your ride, and more, Blazin' Trails forces near-perfect approaches and skillful landings if you hope to even have a chance of winning against your three ontrack opponents.

While demanding physics aren't necessarily a damning aspect of a game, when coupled with equally unforgiving controls and a deadly efficient (some might say rubber-band) opponent artificial intelligence, you have the makings of a championship series that will leave all but the most experienced ATV fans clawing their hair out in frustration. Blazin' Trails makes no bones about throwing tough competition against you. From the very outset, you'll find yourself fighting just to stay up with the pack, much less win the race. While you'll see computer-controlled opponents wreck periodically (eliciting a roar from the crowd in the process), when they manage to stay perched on the bike, they are notoriously fast and aggressive. Even if you manage to open up an early lead in the championship series races, you never have room to feel comfortable in your position to concentrate on things like pulling off tricks from the game's massive roster of stunts. Instead, you're completely focused on nailing a clean landing, leading early in the upcoming turns, and generally doing your best to stay in the race. A little luck never hurts, and if you can manage to topple an opponent from his ATV, thus opening up a little space for yourself in the process, all the better.

The game's controls make it difficult to recommend using the PSP's analog stick over the directional buttons, or the other way around. While the stick feels better for turning and preloading the bike on jumps, its limited range of motion makes it too easy to overcompensate on turns. Similarly, the directional pad works fine for turns, but the down-up motion needed to preload the bike feels awkward and inefficient. In the end, neither configuration works especially well.

Collision detection in Blazin' Trails is more accurate than has been seen in previous ATV games. You can't fly through flagpoles or rubber barriers, because all these roadside obstacles are perilously solid and should be avoided at all costs. Some glitches exist, so you'll sometimes be able to land directly on a rubber barrier and then hop directly back onto the course with no ill effects. But for the most part, your best bet for staying on your ATV is to avoid everything but the jumps. Should you crash or manage to go offtrack, the game has a tendency to reset you back on the track at an odd angle, often leading you to run immediately offtrack again. In all, the racing found in Blazin' Trails is designed for those who enjoy a challenge, but it may be too frustrating for beginners to enjoy.

What is easy to enjoy in Blazin' Trails are the graphics. The huge racing tracks, consisting of both stadium and waypoint races, look virtually identical to the kinds of environments found in the ATV series' console counterparts. Riders animate well on their bikes, swinging left and right and up and down, as the momentum of their bikes carry them along. If you manage to let loose with a few midair stunts, you'll find a huge array of tricks to choose from, all of which look great. The game also features four camera angles to choose from, including a first-person view. All this graphical quality comes at a cost of frame rate, however, as the game tends to chug during accidents or when multiple bikes are onscreen.

Equally appealing is the audio package, which combines one of the more varied soundtracks we've heard in an ATV game in a while. Bootsy Collins mingles with Joan Jett, Slipknot, Melissa Auf der Maur, Keith Urban, and Coheed and Cambria, among many others, to offer an eclectic musical mix that exceeds the scope of the game. The actual in-game sounds are serviceable, so the buzzing drone of the ATVs and the occasionally clipped audience cheers sound true to life, if unremarkable.

One of the big attractions of Blazin' Trails is the online play via the ad hoc or infrastructure modes. Running races in ad hoc mode is painless, as the game plays well with up to four players on the same track. In addition to racing stadium and unlockable waypoint races, the game also has a number of minigames in which you can compete against your friends. The infrastructure-based multiplayer lets you play against three other riders over the Internet, and it features many of the same options you'd find in an ad hoc offering. The game has very good player-matching tools that mirror the Xbox Live standards of quick matches and optimatches, and it employs a buddy list to let you quickly find your friends. Blazin' Trails also employs pretty detailed scoreboards and rankings, not only for online races, but also for your offline mode times, provided you leave your PSP connected to the Internet while you play the offline game. The robust online component definitely adds a lot to the game, and playing against real people definitely mitigates some of the frustration found in the solo mode.

Topping off Blazin' Trails' features package is a fun collectible card game that lets you unlock new ATVs, riders, and gear. You can win and lose these cards to other players when playing online, or you can trade cards with friends, locally. There's also a race creator that lets you place gates in the open environments to create custom waypoint races you can save to your memory card. Blazin' Trails' load times tend to be on the long side--it takes about 40 seconds or so to load a track--so be sure to keep your PSP plugged in when playing extended sessions.

While good-looking graphics, demanding gameplay, and a great soundtrack appear to create a fine gaming package, ATV Offroad Fury: Blazin' Trails' single-player ends up being more frustrating than fun. Those looking for a challenge will find plenty of it here, and the online play definitely brings a lot of replay value to the table as well. Those looking for a racing game to chill out with and enjoy, however, are probably better served elsewhere. 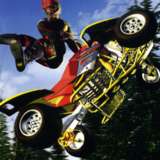 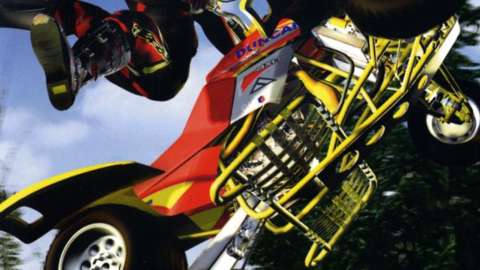 Choose from more than 24 ATVs, and blaze your own trail across 30 unique environments. To become a good ATV racer, you must learn how to adapt to different terrain, including snow, dirt, mud, ice, and grass, in addition to adjusting for obstacles.