Assault Heroes takes several cues from the great arcade shooters of the '80s and '90s but manages to spin all of these influences into a unique-feeling product.

Assault Heroes is a new game that was developed specifically for Xbox Live Arcade. While it isn't a remake or an emulation of any specific arcade game, it most definitely takes its cues from some great old arcade and console games. Assault Heroes takes the driving-and-shooting cooperative action of Jackal, gives it the dual-joystick control of Smash TV, and then gives it the out-of-your-car gameplay of The Speed Rumbler. OK, maybe those references are a little too esoteric. To put it simply, Assault Heroes is a very cool dual-joystick top-down shooter that puts you behind the wheel of an armored assault vehicle and gives you tons of enemies to blow up.

Like any good arcade game, Assault Heroes has almost no story. At the opening of the game, you're given a quick paragraph that says something about how you're some elite special forces guy who needs to get to an underground lab and blow it up. From there, it's all action. This is a scrolling shooter in the same vein as Total Carnage, which means the scrolling is forced, but you can stop it if you move near the edge of the screen and stay there. You control a speedy little vehicle with a mounted turret that can fire in all directions. You have three weapons to choose from, and each one has three different power levels. The default weapon is a basic machine gun that fires more and faster bullets as you power it up. The flak cannon is a slow-to-fire, fast-moving projectile that does heavy damage but requires you to aim carefully. The flamethrower, you know, burns stuff. You also have an area-clearing nuke and the ability to launch grenades, but both of those items are limited. Enemies swarm at you from all sides, starting off in a very manageable manner. But the deeper into the game you go, the harder it gets. So you usually want to keep firing your weapons at all times, just in case. At the end of each zone, you'll fight a large boss, such as a giant robot spider or a huge walking mech with dual Gatling guns. If you run out of lives, your game is over, but you can restart from any checkpoint you've previously passed. In addition to the single-player game, which is a lot of fun on its own, you can also play cooperatively, either locally or via Xbox Live. When playing with another person, you can also bust out a co-op attack, which does a nice bit of damage.

Your vehicle has a life meter that drains out a bit whenever you're hit. If you can avoid damage for a few seconds, the game plays the Halo card, recharging your vehicle's health to its maximum. If it runs out, the vehicle blows up--but you aren't dead yet. You'll escape from the vehicle and be able to run around on foot. If you can last for a little while, a new vehicle spawns and you can continue forward without losing a life or your weapon power-ups. You can also exit your vehicle at any time, which is handy in a few spots because there will be tight passages that your vehicle won't be able to fit through; but otherwise, it's ill-advised. The action gets very hectic in Assault Heroes and is great fun, especially with another player.

Graphically, Assault Heroes looks pretty sharp for an Xbox Live Arcade game. There's a good variety to the terrain, including a water level that transforms your vehicle into a boat, which adds Spy Hunter to the list of its influences. The enemies also look great, and the game even has some nice smaller effects, like good lighting. The soundtrack is your typical "let's blow stuff up" electronic music, and it fits with the action well. The sound effects are also good, and they're about what you'd expect. The screams let out by the suicide bombers as they attempt to rush you are especially noteworthy and kind of funny.

Like in other Xbox Live Arcade games, there are 200 achievement points to earn in Assault Heroes, including points for getting through a whole zone without dying, points for getting through without using grenades or nukes, bonuses for your firing accuracy, and still more for co-operative play. Overall, they feel well balanced, though if you know what you're doing, you can earn 70 points or more over the course of the first level.

Assault Heroes is a great example of what Xbox Live Arcade can do, and in some ways, it presents the best of both worlds. It's great to see quality original games on the service, but at the same time, this one is so clearly influenced by many classic arcade games that it fits right in alongside the other games on the service. If you're a shooter fan, chances are you'll have a great time with this 800-point game. 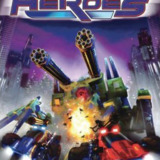