Assault Android Cactus, first released on PC back in 2015, is a game that feels perfectly suited to the Switch. It's the sort of experience that works equally at home on your TV and in your hands during a morning commute. Thanks to a handful of new additions and some excellent port work, this new 'plus' edition is the definitive way to experience Witch Beam's excellent twin-stick shooter.

Assault Android Cactus+ isn't a major overhaul of the original, but it's a significant iteration. As before, there are 25 levels to play through, nine playable characters--five of them unlockable--and the game's focus is on chasing high scores and earning higher ranks for performance by repeating levels. The further you go, the more enemies the game hurls at you in each level, and the more hits it takes to kill them. It's a frantic experience, one where you're almost constantly beset by loads of enemies, swarming and firing shots at you. By the end of the campaign the onslaughts can feel unending, even though, in truth, levels only last a few minutes each.

From the outside it looks hardcore, but one of Assault Android Cactus' strengths is how discernable and navigable the chaos is. Enemy bullets are generally slow-moving, and some enemies are far less dangerous than others. Each android comes equipped with a primary weapon and a more powerful sub-weapon, each of which is given a generously short recharge time, so it's often possible to slip right into a huge group of enemies, do enormous damage, and slip out again. Enemies can drop power-ups, which let you speed up, give you additional firepower, or--best of all--temporarily cause all enemies to power down, letting you rack up kills. Getting kills in quick succession lets you build chain combos--the key to getting a high score is making sure that one of your enemies dies every 2.5 seconds, which means switching between damaging more hardy enemies and wiping out the smaller, more vulnerable baddies often.

To beat a level, and to maintain a high score and thus earn a good rank, you'll want to take as few hits as possible. Getting knocked down rips 10% off your total score thus far, which can be frustrating, particularly in the near-endless 'Infinity Drive' mode, where your total score can remain static or drop over a long period as knockdowns rack up. Every now and then a downed enemy will drop a battery, which you need to collect to charge your power, so going too slowly will drain your battery right down. You'll only hit a Game Over screen if you run out of charge, which can lead to great, tense moments as you fling yourself right through dangerous territory to grab a battery at the last moment.

The game supports up to four players, too, with enemy numbers scaling, and unique leaderboards depending on how many androids you send out into the fray. This means that it's a great fit for parties or multiplayer nights, but as a primarily solo player, AAC never feels lesser for being played alone. If you're planning on playing it with newcomers, though, it's worth being aware that some characters are much easier to get to grips with--and thus more enjoyable to play as--than others. Any character with a slow rate of fire can feel ill-suited to the game's fast pace, and while there are potential strategic advantages to using a railgun or a shotgun, I found myself opting for the faster characters every time.

Levels will typically feature some sort of topographical gimmick. There could be walls that appear and disappear, conveyor belts that make movement tricky, or floors that fall away and rise back up depending on where you're standing. Each presents unique challenges for how you can move through them, and while only a few of them require that you fundamentally change how you play, each one provides a neat twist. The five bosses, meanwhile, are all challenging and fun in their own ways, changing forms and attack patterns throughout their fights. These bosses are Assault Android Cactus+ at its most bullet-hellish, and learning how to weave between their attacks while doing damage is extremely satisfying.

The campaign is a challenge, but not an extreme one--the end boss gave me more grief than any other level, but I still managed to beat in within six attempts. The new Campaign+, which is unlocked once you beat the final boss and is currently exclusive to the Switch version, will push you harder. It takes each level and boss fight from the original and ramps it up--right from the beginning, there's a considerable spike in the number of enemies you'll face in each level, and they tend to be hardier than the ones in the regular campaign, requiring far more shots to kill. Campaign+ might not add any entirely new levels, but doubling the number of leaderboards you have to compete on gives you more incentive to keep coming back and improving.

Curiously, while most levels are noticeably more difficult than they were before in Campaign+, I found that there were some exceptions. Later levels, which were already designed with heavy enemy loads in mind, feel about the same when a few more are thrown in, except the scores you can earn are now much higher. The most profound changes are found in the boss fights, which transform from relative challenges into utter bastards across the board. They're still an enjoyable challenge, though, and thankfully every level is immediately unlocked in Campaign+, so you can jump around and skip any levels that are causing you frustration.

Less showy, but no less significant, is the new addition of single-stick controls. This is an accessibility option, allowing you to play with a single Joy-Con with auto-aiming enabled, and it works extremely well. These controls even helped me to see the value in some of the more complex androids--Shitake's railgun, and its ability to hit multiple enemies at once, is much easier to use with auto-aim. You lose just enough control that the absolute highest scores on the leaderboard are still going to come from players who are using both sticks, but in terms of enjoyment, the game loses surprisingly little when played this way.

The other tweaks made for the '+' edition are minor--new costumes, the option to rewatch the game's few cutscenes, and some balance changes--but there's also no trade-off in opting for the Switch version. The machine shows no signs of struggle running Assault Android Cactus+, holding a steady framerate in both handheld and TV modes regardless of how many enemies are on screen. The game's clean, uncomplicated visual style suits the small screen well, and although you'll need an Internet connection for leaderboards, trying for high scores on the bus, or--if your commute is long enough--plugging into the Infinity Drive feels irresistible.

Assault Android Cactus+ is the ultimate version of an excellent game, and a perfect marriage between console and content. It's exciting and intense without ever being impenetrable, and the new Campaign+ feature is a great reason to dive back into the game even if you've already completed it elsewhere.

View Comments (8)
Back To Top
9
Superb
About GameSpot Reviews 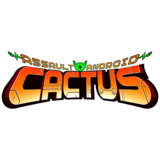 James O'Connor played Assault Android Cactus on PC and again on PS4, but was more than happy to dive back in a third time on Switch. He wants you to know that pre-launch, his was the only name on some of the Campaign+ leaderboards. Review code was provided by the developer.