Aquia is a fun puzzle game that combines Tetris and Bejeweled with a unique twist, but annoying quirks prevent it from shining as brightly as it should.

Art Style: Aquia may look like another Tetris/Bejeweled clone at first, but dive under the surface of this DSiWare aquatic-themed game and you'll find a puzzler with its own unique take on the genre that can be as fun and addictive as its well-known progenitors. Unfortunately, it's not all smooth sailing, given that Aquia's punishing timer mechanic saps a lot of what makes puzzle games so enjoyable, resulting in a game that doesn't build on its strong foundations.

Aquia's playfield is a long column that stretches across the DSi's top and bottom screens. Inside the column are different-colored blocks, and it's your job to make these blocks disappear by matching three or more of the same color horizontally or vertically. To achieve this, you're given a set of blocks that float outside of the main column--you can push these blocks into the column to make matches, but doing so will push out blocks on the other side of the column, which you'll then use to reinsert and make new matches.

This is confusing at first, but it's actually quite intuitive and will take no more than a few minutes to get your head around. The game mechanic of matching blocks/gems/stones/pills has been around for a while now, and Aquia's twist on this well-worn formula is fun in its own right. In fact, Aquia gives you three twists, or in this case, three differently shaped block sets in which to play the main game with. The default is two vertical blocks, but you can also choose to play with two horizontal blocks or four blocks arranged in a square. Your tactics and strategies will have to change significantly depending on which shape block you're using, so it's almost like having three different puzzle games wrapped into one.

You'll have to do this with a sense of urgency. The longer you go without matching blocks, the darker the DSi screens will get (starting from the top and moving down to the bottom), making the game much more difficult because the visible section of the playfield shrinks. It's here where Aquia starts to sink; decreasing the amount of visible playfield wipes out any chance you have of making that dramatic, last-minute comeback that makes other puzzle games so much fun. There's no way back if you start falling behind too much in Aquia, no well-planned flurry of block-matching activity to pull yourself back from the brink. There's only the creeping darkness, a harsh penalty that will no doubt frustrate many.

All of Aquia is submerged within an underwater theme, with a little human scuba diver on the right side of the screens as your visual indicator of how you're progressing through the game's levels. The more blocks you match, the deeper the diver goes, and once the diver is at the bottom, the playfield resets and a new level begins. If you're playing in the game's main mode, these levels are interspersed by a minichallenge that tasks you with putting back together a shape that has been jumbled up within the column playfield. Once again, you'll have limited time to do this, and if you fail, you'll have to start the entire level from scratch, which is extremely frustrating if you've just spent the last 20 minutes on clearing a section only to fail at the last hurdle.

In addition to its main, level-progressing mode, Aquia has an endless mode that challenges you to last for as long as possible. There's no multiplayer, so the game's longevity comes from the three differently shaped blocks that you can use. Art Style: Aquia looks clean and simple, and is at best functional in its presentation. However, you can change the background "aquariums" you're playing in via special unlocks achieved while playing the game.

You'll have to play quite a bit of Art Style: Aquia to unlock all of the different aquariums available, but its frustrating quirks may mean that you'll leave the game well before you see them all. But if you can look past the murk of its shrinking playfields, Aquia is a strong puzzle game at its core and a good purchase for its 500 Nintendo point asking price. 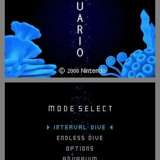 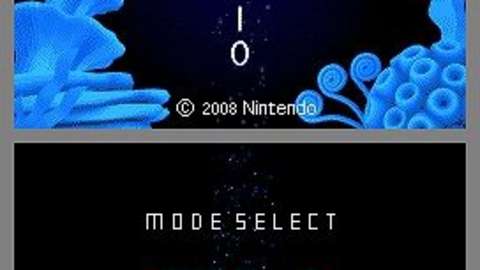 Help the diver descend to the ocean's floor before running out of air by matching three or more colored blocks.