This better than average shooter is fun to play with a friend, but it's best not to think about the subject matter.

Army of Two is a decent third-person shooter that unfortunately sticks its boot in its mouth. It does so by belittling volunteer armed services and selling a power-but-no-responsibility mercenary fantasy, part of which takes place in the modern-day Iraq war. It mostly plays fine. The Aggro system works well (whereby your partner can hold your enemies' attention while you flank), and the online multiplayer is hectic fun. But the way it broaches and then mishandles such a controversial modern day issue is far from army strong.

The story follows Salem and Rios, two mercenaries who fight terror for big bucks with big guns. As they battle through ambush after ambush, it begins to dawn on them that someone within their own organization is selling them out and setting them up. That's right, one bad apple is screwing up the privatized military business for the rest of the upstanding mercenaries. Neither Rios nor Salem engages in any dishonorable behavior, aside from making fun of the Army for being so slow and ill-equipped. That would be fine if the Army they were making fun of were the Venusian Army. Or conversely, if Blackwater mercenaries in the real world hadn't been asked to leave Iraq for flipping out and massacring its civilians. But in Army of Two, there's no such thing as a civilian. If they aren't good guys, they're terrorists.

The game itself is a lightly tactical third-person shooter in which you take on terrorists from Somalia to Miami by shooting them with guns, punching out their lights, and hitting them with car doors--all while wearing a scary-looking goalie mask. As you thwart terror and complete missions, you earn cash that can be spent on awesome guns. From there, you can spend even more money pimping out stocks, adding grenade launcher attachments and even gold plating.

But with all this, you'll have a hell of a time hitting anything. Sure, you can stop, aim, and quickly kill a stationary target with a headshot. But if you're trying to run and shoot, you won't do nearly as much damage with that pimped-out AUG as you'd like. This was probably done to force you to rely on your teammate, but it seems like an unnecessary handicap all the same. Even worse, enemies have incongruous visible life bars, and some of them can take more bullets than a terminator. To top it all off, they have superior aim and can hit you just as easily from 50 feet as they can from five. Talk about asymmetrical warfare.

To keep yourself and your partner alive, you have to take advantage of the Aggro system. Borrowed from online role-playing games, Aggro is an artificial intelligence system that makes enemies focus on whoever is doing the most damage and ignore the person doing the least. The basic idea is to have one guy draw all the enemy fire while the other one sneaks around back and shoots everybody dead. It isn't rocket science, but coordinating attacks with a friend or with the CPU is still rewarding. Sometimes, one plus one equals fun.

At other times, it can be a little confusing. In the single-player campaign, you either control Salem or Rios; you can't switch between the two. If you're mortally wounded, your CPU partner can drag you to safety and heal you. Sometimes, however, he'll ignore all the obviously safe places and drag you through the entire level (assuming you both survive) before patching you up.

The campaign isn't that long, but to the game's credit, it is fun to play through cooperatively. You can set up public co-op campaigns that just anyone can join, or private ones for just you and a friend. Once you finish, you can go online to challenge other two-man squads in versus mode. The point of any match is to make more money than your opponents, which is earned by making kills and completing objectives. Some modes have you flying around, racing to kill enemy non-player characters, while others have you rescuing hostages or planting bombs. The best of these throws a mix of objectives at you, so there's a great deal of diversity within a single match. Then again, the fact that you can't hit targets without stopping and aiming is especially apparent online. Instead, you're better off running up and smacking people, then shooting them when they're down. This is entertaining for a few hours, but it gets old pretty fast.

The PlayStation 3 and Xbox 360 versions of Army of Two are almost indistinguishable from one another, though the former incorporates some minor motion controls. Both versions look and sound good. But with numerous loads and small environments, they should. And even though the graphics are impressively realistic; the silly hit point bars attached to your enemies break the spell a little. The silly suicide bombers who run at you screaming like something out of Serious Sam don't help either. The gun sounds are mostly fine, and the voice acting is OK, except that any time there's an enemy who has to be killed from behind (once every 10 minutes), your partner will repeatedly say something along the lines of "He looks tough, better take him from behind!" If there's one thing that can be said for private military, it's the lack of a don't-ask-don't-tell policy.

Army of Two is a better than average shooter that roughly treads on a political landmine when it should have stormed some future battlefield. It features cool co-op mechanics and is fun to play online, with or against friends. But even its title mocks the Army, literally one-upping its slogan while glamorizing a sector that, if anything, deserves scrutiny--not macho fantasy. If you're the type of person who would rather shoot first and ask questions never, by all means, pick up Army of Two. But if you like to think--and the fact that you're reading this review suggests that you do--be warned: Army of Two is less than the sum of its parts. 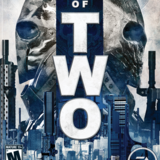