Chances are, if you've ever been in a bowling alley, bar, or pizza parlor in your lifetime, you've encountered at least one Area 51 arcade machine. Originally debuting as a light gun-based shooter, the Area 51 series has been largely dormant for a number of years now. This is perhaps for a reason, considering the original game, let alone its follow-up sequels, wasn't really that great to begin with. Thankfully, Midway's latest version of Area 51 bears little resemblance to its predecessors. Now, Area 51 is a first-person shooter. The original game's titular setting has remained intact, as has its army of mutated villains. However, Midway has decided to inject some storyline into this version, as well as a smattering of Hollywood voice talent and a pretty-nice-looking graphics engine. Unfortunately, all this gussying up can't gloss over what's ultimately an average shooter that doesn't offer up more than a handful of satisfying thrills throughout its single-player and multiplayer modes. You'll certainly play worse FPS games in your lifetime, but you'll also certainly play better ones, too.

As the title would suggest, Area 51 takes place at the infamous, eponymous military installation, where the US government supposedly houses all its secret alien technologies picked up after the Roswell, New Mexico, incident of the 1940s. As one might expect, for this to be much of a game, something has to go horribly wrong; and indeed, it does. You play as Ethan Cole, a HAZMAT operative sent in with his team--a prototypically ragtag bunch--to assess some manner of viral outbreak within the walls of Area 51. After a gruff meet and greet with the local military personnel, you're sent in guns blazing. What you end up finding is a horde of mutated soldiers, scientists, and other alien creatures wandering about the place, looking to infect and/or kill whatever comes their way. Oh, and there's also a whole bunch of nonsense involving the Illuminati, psychics, those little bigheaded, gray-skinned aliens we've all come to know and love, and a whole lot of crazy conspiracies thrown in to the mix. But frankly, all that stuff is utterly incoherent, and it just gets in the way of you shooting more ugly mutants.

The core gameplay at the heart of Area 51 will be immediately accessible to anybody that's picked up Halo, Doom 3, or practically any other FPS released in the last several years. The weapons, controls, and general feel of the gameplay are pretty obviously derived from these games, and while Midway's Austin studio has certainly done a good job of mimicking what made these games great, that's about all it's done: mimic. Of course, that's not necessarily a negative criticism, especially because the action can, at times, be quite satisfying. You begin the game teamed up with a bunch of similarly armed HAZMAT soldiers, and during the early portions, you'll find yourself frequently bombarded by swarms of enemy mutants. Your team is quite adept at fighting off the enemy (especially because they can't be killed during these fights), so they're right there, fighting alongside you. These fights can be quite thrilling, as huge hails of gunfire go flying and more and more bad guys keep coming out of the woodwork. Sadly, there are only a few of these moments.

The rest of the game feels like a pretty standard corridor crawl, with small groupings of enemies leaping out at you at the most predictable times. Whether you're fighting mutants, Illuminati soldiers, or just about anything else, the battles tend to feel pretty much the same. They can often be challenging, and admittedly, some of the weapons do pack a pretty satisfying punch (especially the ones that can be dual-wielded), but the fights can also get fairly repetitive, especially since the objectives rarely revolve around more than just finding keycards and other bric-a-brac to try to open locked doors so you can get to the next section.

There are a couple of ways in which Area 51 does try to break up some of the monotony. For starters, in grand Metroid Prime fashion, Cole can scan a number of different objects, documents, and corpses as he goes. Scanning items rewards you with unlockable backstory, info, and secrets regarding the circumstances of the game, although you can only access this stuff outside the main game. The other X factor thrown in is the fact that early on, Ethan is infected by the virus that's turned everybody in the installation into an ugly mutant of some kind. When this happens, Ethan gains the ability to transform at will, and he gets a different set of powers when he "goes mutant." Essentially, his melee attacks become stronger, and he gains the ability to launch two types of viral attacks at enemies from a distance. The game also tunes the visual experience, colorfully highlighting heat signatures for nearby enemies and giving a sort of soft blur around everything else. This infected state isn't a bad idea by any means, and there are definitely times when it feels useful, especially because you tend to take less damage in this state. But most times, you needn't even bother with it. None of the attacks are really that much more powerful than when Ethan is in human form, and apart from a change of scenery and a slight dent in the amount of damage you take, there's little other incentive to get your mutation on.

Once you've dealt with Area 51's single-player missions, there's a multiplayer mode to partake in as well, albeit a multiplayer mode that's about as average as you're going to find in an FPS these days. Up to 16 players can participate in team and regular deathmatches, capture the flag matches, and a game called infection, where players take on the role of either a solider or an infected mutant. The maps are modeled after various Area 51 locations, so you can expect a lot of corridors and stairways to navigate. For the most part, the multiplayer is pretty good and runs well on both the PS2 and Xbox, though there's nothing particularly special about any of it. Between the somewhat limited array of weapons and fairly run-of-the-mill maps, it's probable that you'll simply play through a few rounds of the multiplayer and then be done with it, as it's never exciting enough to really grab hold of you and keep you coming back for more.

Area 51 excels most in the realm of visuals. The graphics have a consistently sharp, well-rounded look. All the environments are nicely detailed and are actually pretty well varied, despite almost entirely taking place within the confines of a government laboratory. The characters and enemies are similarly detailed, though not quite as creatively designed. The HAZMAT teams just look like slightly less cybernetic Master Chiefs, and most of the mutants aren't all that scary. That's not to say there aren't a few horrific and creatively designed baddies here and there, but it is to say that you won't see nearly as much of them as you will generic-looking mutants. Small visual touches, like excellent lighting and particle effects, do little to hinder the consistent frame rate, which runs pretty smoothly across both platforms, though the PS2 version's does tend to take more of a hit. There's no real clear-cut visual winner between the PS2 and Xbox versions of the game, as both look almost exactly alike, which actually says something to the quality of the PS2 version's graphics, but isn't a knock against the Xbox version's.

The sound effects are also quite impressive. Weapon sounds are brutally loud and echo off the walls of the base in pretty fierce fashion. In fact, during the chaos of battle, it's pretty hard not to get lost in the din of gunfire and enemy growls. Unfortunately, the rest of the sound design doesn't measure up as well. The soundtrack consists of mostly minimalist beats and tracks that are barely even noticeable, let alone memorable, and the voice acting is pretty uneven all around. Name talents like David Duchovny, Powers Boothe, and Marilyn Manson lend their voices to the game, but none does much with his role. Boothe simply appears over the radio from time to time to bark orders at you, Manson's jar-encased, fleshy, psychic creature is amusing, though not because of his voice work, and Duchovny sounds like he's been freebasing NyQuil as he sleepily narrates Ethan Cole's story, putting you to bed in the process. In fact, the best voice acting in Area 51 comes from the fringe characters that are voiced by people you've likely never heard of.

It shouldn't take you more than a dozen or so hours to work your way through Area 51's single-player campaign, and the motivation for doing so will hinge entirely on how much you really get into the game's brand of action, as well as how much repetition of said action you're willing to put up with. In no way is the game devoid of fun, but FPS fans will often feel like they've experienced a lot of what Area 51 has to offer before, especially when it comes to the multiplayer. In the end, Area 51 turns in what amounts to the perfect rental for first-person shooter fans. It's a brief and infrequently enjoyable game that has some problems, but it does just enough right to make it worth a play...but probably not a purchase. 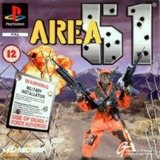