Ape Escape: On the Loose Review

Ape Escape: On the Loose is a lightly updated port of the original Ape Escape, which was released on the original PlayStation back in 1999. The game was a great platformer and was also one of the first games to require the use of Sony's dual analog controller. It's now available on the PSP, where it looks and sounds better than it did six years ago. The finely tuned control that made the first game such a hit seems to have been lost in translation, but the game still has considerable charm.

In the world of Ape Escape, monkeys are on the loose because of a white monkey named Specter. The little bugger gets his hands on a helmet that turns him into a supergenius, and his goal is to unseat humankind as Earth's primary race by sending henchmonkeys back into time to rewrite history. You play as a boy named Spike, who is traveling through time with a variety of weapons at his disposal to stop all this monkey business.

The game is broken up into levels and worlds, sticking true to the platformer blueprint. Each world is a different time period, and each level has a number of monkeys in it that you must catch with your time net before you can proceed. The gameplay is very gadget focused, and along the way, you'll earn new gadgets that can be assigned to one of three gadget buttons and used at will. The most useful is the stun club, a light saberlike weapon that will eliminate run-of-the-mill enemies and stun monkeys long enough for you to net them. You'll also encounter monkey radar, a spinning satellite that points you in the direction of the next monkey. A slingshot lets you attack from a distance. A hula hoop forms a shield of sorts and lets you run faster. The sky flyer lets you slow your descent from ledges. The gadgets are usually fun to use and give the game a good deal of variety.

Controlling Spike and his gadgets is, unfortunately, a slightly different story. In the original game, you used the right analog stick to use your gadgets. This method let you attack in all directions incredibly easily, and you could use objects like the hula hoop by spinning the stick. Since there's no right-analog stick to use on the PSP, the developers have changed things a bit. Now, your three gadget buttons both select and use the gadget. This means you can attack only in the direction you're facing, which makes the simple act of catching a monkey quite a bit more difficult. Over time, you'll get used to the game's somewhat limited control, but it does make things more frustrating than you might expect. Gadgets that required you to spin the right-analog stick now function when you repeatedly press a gadget button. This works pretty well though.

A key thing in any 3D platformer is its camera. When you're faced with precision jumping or other challenges of movement, the last thing you want to see is a camera that can't keep up with the action. The camera in Ape Escape tends to lag behind a bit, and in tight quarters, it tends to go inside walls and do other stuff that really obscures the action. You can use the L trigger and the D pad to re-center or move the camera around, but when left to its own devices, the camera isn't too hot.

In addition to the lengthy single-player adventure, there are also minigames you can play with a friend, such as snowboarding (with monkeys), boxing (with monkeys), and Ping-Pong (yes, with monkeys). This is a nice addition, but the games aren't deep enough to really stand out as a major feature in the package.

Graphically, Ape Escape: On the Loose is closer to the PS2 release of Ape Escape 2 than it is to the original Ape Escape. The monkeys are bright, colorful, and full of life. The game has a very cute, kid-friendly look to it, and it's hard to deny the charm of monkeys with sunglasses toting submachine guns and laser pistols. The game runs at a smooth frame rate, though you'll notice a few dips here and there. Overall, it's a good-looking game.

The sound attempts to be just about as cute as the graphics with lots of squeaks from the monkeys and a lot of high-pitched speech from the various human characters in the game. The music is appropriately upbeat as well, and all of this ties together to give the game a little more charm.

The original Ape Escape was an amazing game, and it's a shame that some aspects of it haven't translated to the PSP too well. Still, even with the control and camera being an occasional chore, there's enough good old-fashioned platforming here to please fans of the genre. 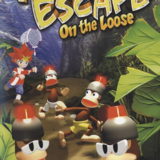