If you're looking for a simulation-style baseball game for your GameCube, All-Star Baseball 2003 is the best and only option.

Acclaim's All-Star Baseball franchise was once considered the most realistic and best-playing baseball simulation on the market. But that was when the game was released for just one system each year and Acclaim's Austin team was able to baby it through development and make sure that every last detail was just right. Since the franchise has been available for multiple systems, it hasn't fared quite as well. All-Star Baseball 2002 was released just last November, and now four months later the next installment is already complete. But instead of being a rushed port of last year's game, All-Star Baseball 2003 is what last year's game would have become if it hadn't been rushed out the door to make the GameCube's launch.

All-Star Baseball can always be counted on to include a wealth of gameplay modes, and the 2003 version ups the ante with the inclusion of a franchise mode. However, there's one huge catch. You can't save the franchise mode unless you buy a third-party memory card, which is much larger than Nintendo's official memory card. To save the franchise mode midseason, you need what amounts to five Nintendo memory cards. Needless to say, the average person will not be able to play through franchise mode unless they pony up for the larger memory card or don't mind leaving their console on for weeks at a time. For those who do make the investment, the franchise mode is impressive. You can play for 20 consecutive seasons and let the statistics pile up while watching players retire, win the Cy Young award, get inducted into the Hall of Fame, and much more. You'll also be able to monitor your farm team and bring up prospects when they're ready for the big time, trade and release players, and manage salaries. If you're not happy with the current roster of free agents, you can always create your own with a simplistic player-creation tool.

Even if you don't feel like buying a new memory card to enjoy the franchise mode, there are plenty of other gameplay modes to enjoy. The exhibition mode is available for up to four players, and you can choose from any of the 30 MLB teams, both all-star teams, and a legends team composed of all-time favorites like Willie Stargell, Robin Yount, and Rod Carew. For those who only like to play with the best, you can cut to the chase and jump straight to the all-star game or World Series. While the franchise mode may not be accessible to the average player, the single-season mode is a nice substitute. It includes all the same features as the franchise mode except statistics and players do not roll over into the next season. As you perform certain objectives in the franchise or season mode, you are awarded points that can be spent to buy collectible cards. These cards can then be used to unlock hidden stadiums and teams. The home run derby may seem like nothing more than a fun diversion, but it really helps in coming to grips with the most difficult part of playing the game: batting.

All-Star Baseball 2003 retains the same batting interface as last year's game, and while it's incredibly deep, it's not easy to master. Like in most baseball games, a cursor system is used for pitching and hitting. Pitching is quite easy. You simply choose a pitch from the pitcher's real repertoire, adjust the pitch location with the analog stick, and press the A button to let it fly. The ball can be slightly manipulated while it's in the air, which can help to fool the batter. However, batting is a bit more complex and much more difficult. Your batter's cursor is sized in relation to his batting average and his abilities against the particular pitcher on the mound. If you feel like you have a good handle on lining up your cursor, you can press the B button to swing for a home run. This makes the size of the batting cursor significantly smaller, but if you make contact with the ball, it's destined for the outfield fence. If you'd like to tailor your hitting to take advantage of holes in the defense, you can adjust your swing accordingly with the C stick, or you can attempt to guess the pitch, which will increase the size of your batter's sweet spot. While the options available to you when you're inside the batter's box are impressive, actually hitting the ball is far too difficult. Pitches come in way too fast, and to make contact with the ball you have to swing a split second after the ball leaves the pitcher's hand. That doesn't leave much time to adjust the batting cursor before swinging, and it often results in balls going past the batter before he's had time to get the lumber off his shoulder. You can eventually adjust to the speed of the pitches, but it can take several days of playing the game.

Much like the pitching and batting interface, the remainder of the gameplay is quite deep. Before each pitch you can adjust both your infielders and outfielders to nine different settings to accommodate for a hitter's tendencies, and you can attempt to pick off runners leading off the bag either before or during the windup. Running the bases works well unless you attempt to move just one base runner. The mechanics for doing so require that you hold one button and press another at the same time. The response from the base runner is so lagged that you'll think the command wasn't entered, and you'll end up sending your runner back to the same base. Fielding is fairly easy and intuitive, but the dive function is awkward, and your player will often leap in the wrong direction or let the ball roll underneath him. Pop flies are no problem to get underneath, and you can even enter commands into a buffer that will let your fielder perform moves in succession without touching a button. This comes in especially handy when you're trying to field a ball off the wall. In all, the gameplay in All-Star Baseball 2003 is a vast improvement over last year's game, but several slight issues pile up to create a few minor headaches.

Acclaim hasn't established a reputation for supplying the most breathtaking graphics in its games, though the All-Star Baseball series has generally been at the top of the pile in this respect. But it's obvious that the GameCube version of this year's game has been developed using the PlayStation 2 version as a backbone. Player models are basically the same other than their height and facial textures, and it's impossible to recognize the body shape of players who would normally stand out in a crowd, like David Wells. The facial textures are accurate enough to distinguish one player from another, and every player comes adorned in the special equipment he really wears. The stadiums feature some nice details such as Ks that will be added as the pitcher strikes out batters and mascots that patrol the roofs of the dugouts, but close-ups reveal low-resolution textures in and around the dugouts. The 2D bitmaps used for the backgrounds are pixilated and blurry and detract from the overall look of the game. When large portions of the stadium are shown onscreen, the textures have a tendency to shimmer. Other problems include players that will run right through each other, balls that amazingly teleport into players' gloves, and a lack of any sort of particle effect to show dirt being kicked up while sliding into base. Real-time shadows chase players around the field, but you won't see the shadow of the top of the stadium gradually creep across the field. There are some nice touches to the graphics, however. The dugouts are filled with polygonal players who will react to the events on the field, and when you select a pitcher to start warming up in the bullpen, you can actually see him doing so. The animation is also quite good. Base coaches will run out of the way of players or smack the ground telling them to slide into base, and players look natural while turning the double play or diving for a ground ball. All-Star Baseball 2003's visuals look impressive at times, but on the whole the game looks only slightly above average when compared with other GameCube games. Hopefully Acclaim will build an engine from scratch for next year's game and take advantage of what the GameCube hardware is truly capable of.

The audio in All-Star Baseball 2003 is one of the game's strongest traits. The play-by-play is excellent. The announcers manage to keep up with the action while supplying historical commentary and anecdotes at the same time. As each player comes to bat they'll remark on his past at-bats and mention the player's stats from the previous year. If you let the game idle for a while, they will begin talking about experiences they've had in particular cities or will offer commentary on recent world events. The stadium sound effects are quite good, but you'll constantly hear the same fans making the same comments. The organ will kick in during the seventh-inning stretch or during lulls in the action, which provides a great deal of atmosphere to the game. There are no sound effects for the umpire in the game, which gives the presentation a TV flair, but it takes away some of the excitement of close plays and strikeouts.

If you're looking for a simulation-style baseball game for your GameCube, All-Star Baseball 2003 is the best and only option. Despite the fact that most people will be unable to save the franchise mode, there are plenty of other modes to explore, and playing the game is a deep, engrossing, and realistic experience. The graphics leave a bit to be desired, and there are some slight quirks with the gameplay, but compared with last year's bug-filled installment, All-Star Baseball 2003 is winner. 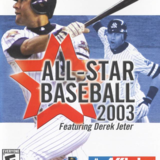 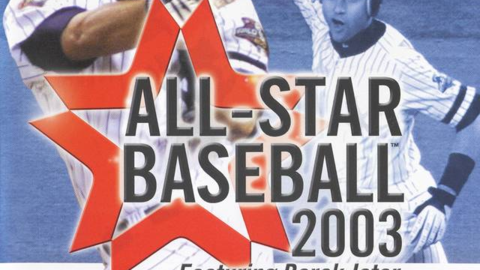 All-Star Baseball 2003 is the best baseball simulation available for the Xbox, and it will satisfy hard-core fans of hardball.