A sense of murky monotony sucks most of the life out of this action RPG remake of Sega's classic arcade shooter.

On paper, Sega and Totally Games' new Alien Syndrome remake for the Wii and PSP has everything it ought to. The top-down perspective, the hordes of mutated alien abominations, and the trigger-happy gameplay all seem to honor the memory of Sega's 1987 arcade classic. What's more, some light RPG elements have been added, including distinct character classes and a fairly granular level of ability customization. Heck, there's even a crafting system for conjuring supplies and upgrades. In practice, though, it's a repetitive and boring experience that fails to evoke the spirit of the original Alien Syndrome, or the superior dungeon crawlers that it attempts to crib from.

Early on, there are some thin allusions to past conflicts and dark secrets in the main character's past that serve as a lame attempt to slap more of a narrative onto Alien Syndrome than the "kill all the aliens" directive that supported the original. Save for a none-too-subtle reference to Star Trek II: The Wrath of Khan, it's all pretty bland and uninteresting, and once you've been transported onto the derelict research facility infested with the Alien Syndrome in the first level, you don't hear too much more than boilerplate mission directives. It's as if the game itself loses interest in its overarching story.

Before you start wasting wave after wave of horrible alien monsters, you'll have to choose a character class to play as, which include demolitions expert, firebug, seal, tank, and sharpshooter. This initial choice will decide your starting stats as well as the type of weapon you'll start out with, though as you earn levels, you'll get points that you can put towards the proficiencies that define the other classes. The sense of freedom in developing your character is false, though, because once you've committed to a certain weapon type, it's not really worth it to put points into building up another weapon proficiency from scratch. Why waste points on unlocking a weaker weapon when you can continue to goose the potency of the weapon you're already using? It's all kind of a moot point anyway, because regardless of which class you choose, the weapons don't feel particularly powerful or, save for the melee-based tank class, very unique.

Perhaps the biggest difference between the PSP and Wii versions of Alien Syndrome are in the controls. On the PSP, your movement and aiming are both handled with the analog stick, and when you start firing a ranged weapon, you'll lock into the direction you're facing. On the Wii, movement is handled by the analog stick on the Nunchuk, though you'll control your aiming reticle with the Wii Remote, and wherever you point is where your character will shoot. This makes it easy to shoot in one direction while moving in another. The Wii shooting controls actually feel pretty good, but the PSP control scheme wins out in melee attacks simply because it sticks with basic two-button combos. On the Wii, you're forced to use a potpourri of button presses and arcane gestures with the Wii Remote that make the melee attacks too cumbersome.

Once you get into the game, you'll quickly find that Alien Syndrome is essentially a space-age dungeon crawler, but it's not a terribly good one due to issues of both quantity and quality. Though you'll be given predictable assignments like "get the blue keycard" or "rescue the colonists" on rare occasions, more often than not, your job is to get from one end of a level to the other without falling prey to the antagonistic aliens that constantly spawn around you. The first problem lies within the aliens themselves, which tend to be sluggish beasts that, if you didn't need the experience points to toughen up for the occasional, mandatory boss fight, you could just as easily run right past. If you choose to hunker down and fight the aliens, you'll find that their biggest asset is their ability to soak up damage. It doesn't make them challenging enemies, it just means that it takes a while to wear them down, and even in larger numbers you can best most of them with some easily paced circle-strafing. On the rare chance you find yourself overwhelmed by the half-dozen or so aliens that you'll usually face, you can usually just run away, and the aliens will disappear just as easily as they first spawned.

What's most exhausting about the enemies in Alien Syndrome is the terrible lack of variety. Though there are definitely several distinct types of aliens, they all manage to look kind of blobby. The game also loves a good palette swap, and those greenish worm-things you fight at the start of the game aren't functionally different from the bluish worm-things you fight around hour seven. The environments do little to add to the excitement, though if you like pointlessly serpentine mazes of nondescript corridors, occasionally punctuated with big, empty rooms, then boy howdy are you in luck! Whether you play Alien Syndrome on the Wii or the PSP, the game has a drab, murky look, though the washed-out textures and blocky designs that are hidden by the demure size of the PSP screen can be seen in all their fuzzy, big-screen glory on the Wii. Technically and artistically, this game simply isn't pleasant to look at.

Alien Syndrome can be played with up to four people locally, and though misery loves company, additional players don't make the experience any more entertaining. The original Alien Syndrome wasn't terribly groundbreaking, but it still managed to provide some manic, challenging fun. This game is an exercise in formulaic tedium that fails to deliver on the promise of an updated Alien Syndrome, or a passable action RPG experience. 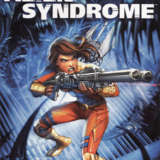 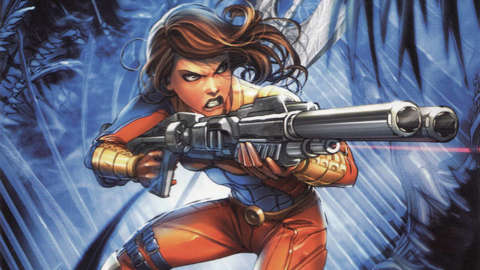 Alien Syndrome is a fast-paced action-RPG set in a sci-fi universe, in which you can battle aliens and specialize your character with various skills.