There truly isn't anything else quite like Alien Hominid on consoles today.

Here's a fact: Console gaming is a technology-driven business. This isn't exactly the forum for getting into the how and why, but it's also a fact that this focus has allowed the art form of 2D graphics to fall by the wayside--at least within the big business of console gaming. But original 2D gaming is thriving on the Web, thanks in no small part to the Macromedia Flash platform and amateur artists and programmers with lots of time on their hands. Newgrounds.com has for years been a forum for no-budget Web-based gaming and animation, and it's where Alien Hominid, the debut game from the independent development studio The Behemoth, began its life. With a surplus of charm and a tried-and-true side-scrolling shoot-'em-up design, Alien Hominid gained loads of momentum on the Web, which has allowed for the unlikely crossover to the PlayStation 2 and GameCube. While its gameplay design may appear to be derivative, there truly isn't anything else quite like Alien Hominid on consoles today.

The action in Alien Hominid is pure throwback--nostalgia-prone gamers in their 20s will probably be reminded of Contra most immediately, though the game definitely owes a greater debt to the humor, breakneck pacing, and extreme challenge of SNK's unkillable Metal Slug series. But rather than charging you with destroying some weird giant heart-monster or taking down a Hussein-esque dictator, as those games do, Alien Hominid puts you in the role the titular character, who just wants to get his (its?) spaceship back from the FBI. Over the course of the game, you'll have to cut a swath through a seemingly endless number of FBI agents, KGB operatives, and Area 51 spooks, and do battle with a butterscotch monster, a variety of giant robots, and even one of your own before you'll get what you want.

Your directives are straightforward--run from the left to the right, shooting or throwing grenades at anything that moves, and avoiding incoming attacks as best you can--though Alien Hominid makes some unique contributions to the classic side-scrolling shoot-'em-up formula. You can use the shoulder buttons to perform quick rolls to the right or the left, which are good for dodging bullets and getting up close and personal with the enemy. You can also leap on top of many of the basic enemies, and either bite their heads off for a quick, gory kill, or pick them up and chuck them at their allies. In most areas you can also dig into the ground and lie in wait until an enemy strolls by, at which point you can pull him under for a nice sneaky kill (this tactic is also useful for dodging otherwise undodgeable barrages). The game is available for both the PlayStation 2 and GameCube, and it's identical on both systems.

The core action is pretty satisfying, and anyone who grew up in Cold War times will probably get a perverse, irony-tinged thrill out of crushing the "Red Menace" in the game's middle levels. But the best moments in Alien Hominid are when it moves away from the basic gameplay. You'll regularly find vehicles you can drive, ranging from civilian automobiles to earth movers to a giant, vengeance-filled Sasquatch (our personal favorite), and there's something absolutely gleeful about just plowing through your enemies with these. There are several levels where you'll actually recover your spaceship for a short time, which changes the action entirely, and is quite fun in its own right. The game is also extremely fond of throwing powerful bosses at you, and each of its 16 levels is fitted with several, all of whom will give your reflexes a good test.

Like the side-scrolling shoot-'em-ups from which the game takes its inspiration, Alien Hominid is really, really hard. You can occasionally score a protective force field that will absorb one shot before dissipating, but without it you're naked to the world, and one hit will leave you with one less life. Even the saltiest of side-scrolling veterans will be hard-pressed to finish the game with the number of continues allotted, but the game keeps things manageable. When you take your last hit and are faced with the "game over" screen, you can hop right back into the game with a full stock of lives, starting from the last level you were on. Pushing forward through the game like this will take most players anywhere between two and four hours. It's short, but it's also completely relentless and almost endlessly inventive, making it an extremely satisfying experience that is highly replayable.

Sharing the intense experience with a friend in the game's co-op mode is one fine reason to revisit Alien Hominid, and the game includes a suite of hilarious minigames as well. Initially you'll have access only to the PDA games, which are simple but challenging little affairs in which you guide a stick figure through one single-screen environment at a time, eliminating all the enemies and picking up all the items in the area. There's even four-player support for these, which superbly cross-pollinates competitive and cooperative gameplay, as well as a fully featured editor that allows you to create your very own PDA-game levels. Additionally, there are four other minigames you can unlock, such as the two-player neutron ball game, which is sort of like a more violent version of basketball, and the 2600-inspired Super Soviet Missile Mastar, in which your goal is to guide an ICBM from Mother Russia past jets and flying fowl onto American soil. The main game makes Alien Hominid a worthwhile package on its own, and the minigames are icing on the cake.

People's names are usually associated with games only because of endorsement deals or the name recognition provided by a high-profile designer. The only person who gets called out in the opening credits of Alien Hominid is Dan Paladin, the game's lead artist, and with good reason. The absurdly violent yet cute and playful visual style is the most striking characteristic of Alien Hominid, and it has a kind of tightly honed cohesiveness that you pretty much get only from an auteur. But the technology, even by the standards of recent 2D games, isn't fantastic, and the game feels kind of choppy at times. Even still, the screen is so jam-packed with detail and personality at any given moment that the technical imperfections are easy to forgive.

There's not a lot to the sound design in Alien Hominid, but what's there does a fine job of complementing the rest of the package. There are only a handful of different tunes, but each is surprisingly catchy and unique. The determined keyboard line in the game's main theme has a real 007-meets-jewel-caper feel to it, while the filtered acoustic guitar and plinky synthesizers that accompany the PDA games add a bit more playfulness to the urgency. The in-game effects aren't quite as remarkable, though the horrified shrieks of enemies who have turned tail are rather amusing.

In a business where games of Bruckheimer-style blockbuster proportions are soaking up all the sales and much of the critical acclaim, it's heartening to see that there's still room for something completely indie like Alien Hominid. The game is a perfect fit for Metal Slug fans, and its incredible charm and refreshing visual style will make it hard for anyone to look away from. If you're just tired of sequels, and long for a game that can genuinely surprise you, go get Alien Hominid. 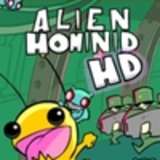 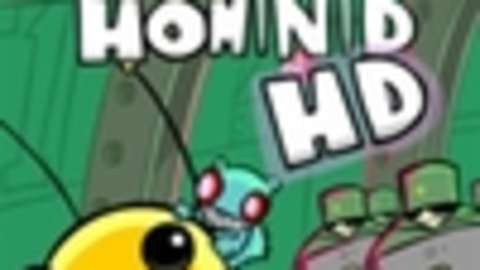 In Alien Hominid HD, you'll take on the role of a diminutive but hilariously deadly alien who must recover his spaceship from Earth.