A number of notable frustrations keep this moderately enjoyable flight-combat sim from soaring.

Flight-combat sims are an unfilled niche on handheld platforms, which makes Air Conflicts: Aces of World War II a notable addition to the PSP's library--and an enjoyable one, once you get used to its idiosyncrasies. The in-air action is entertaining, you can tackle the enemy as one of four countries, and you'll soar above a variety of different locations, from the Egyptian desert to the snowy shores of Finland. It's unfortunate that the fun is so often grounded by frustration. Your limited ammo reserves may necessitate landing at base, yet doing so is next to impossible, which makes certain missions highly irritating. Additionally, the unusual mission structure keeps you from replaying most assignments if you lose them, yet you can complete the campaign even if you fail more often than you succeed. These and a few other bizarre design gaffes are true head-scratchers, but enjoyably tense dogfights let the game shine through these murky clouds.

However, it will take time for Air Conflicts to grow on you. Riddling an enemy aircraft with bullets is more challenging than simply hovering your targeting reticle over it and firing. Rather, you must lead your target by gauging its direction and altitude before letting loose your barrage. Your reticle will help you out in this regard by turning red when you can successfully hit your target, but it will rarely be when your enemy is in the center of your crosshairs. The targeting will require a mental adjustment (and a few failed missions) for many players, but once you grow accustomed to thinking a half-second ahead, you'll be a much more formidable presence in the skies. You'll generally be taking on a fair number of enemy fighters at once, often reinforced by friendly AI-controlled pilots, and in these circumstances, dogfights can be a lot of fun. Bullets fly through the air, felled foes burst into flame before taking a final nosedive, and you'll weave around as you dodge ground-based antiaircraft gunfire.

You'll unlock new aircraft as you progress through each campaign. Some, such as the German Messerschmitt, excel against winged adversaries, whereas bombers such as the B-17 easily take out ground targets at the expense of maneuverability. For the most part, each aircraft feels good to pilot, though the PSP's analog nub makes the more agile planes handle a bit too loosely. Some missions, such as one in which you escort a friendly bomber across the African desert, can be completed within a minute or two. Others last longer, stringing together multiple objectives and requiring you to take down enemy fighters and bombers in addition to tanks, buildings, and other ground targets. Successfully completing these multipart missions is exciting and rewarding, especially when waves of reinforcements keep you on your toes. Yet Air Conflicts begins to struggle in these longer stretches. You always possess limited ammo, even for your front-mounted machine gun. When you run out, you can land at a base to fill your reserves, but you have a better chance of piloting an actual Spitfire than you do of landing one within the game. The added authenticity of limited ammunition could have offered a welcome tactical consideration, but the idea goes up in flames thanks to the difficulty of successfully landing an aircraft.

Failed missions are at the heart of another of Air Conflicts' intriguing but flawed concepts. Missions progress historically; if you fail one, you generally don't get a chance to play it again and must instead choose another. Should you lose an aircraft, it will be removed from the hangar (though there are several aircraft of each type held in reserve for you, so it takes several losses before you lose complete access to your preferred planes). Failed missions won't keep you from completing the campaign, but the ability to lose the majority of your assignments and yet still finish it diminishes any sense of rewarding progression. Winning a mission increases your pilot's ranking and may gift you with additional aircraft, but when losing a mission doesn't have many long-term consequences, victory feels hollow. Additionally, withholding the ability to go back and replay a mission once you've finished a campaign is an unnecessary restriction. Following a historically accurate timeline is an interesting idea, but as presented in Air Conflicts, it's an added frustration without any notable benefit.

Thankfully, the campaigns keep the scenery interesting. You'll fly above Hungarian fields and over the English Channel, and though Air Conflicts won't win any awards for its visual presentation, the settings look nice enough. The warm glow of the setting sun makes evening battles look particularly attractive, and wintertime combat feels appropriately chilly. However, the blurry ground textures and lack of self-shadowing are an occasional nuisance because they make altitude difficult to judge and can lead to an inadvertent crash. Inordinately long loading times are also an annoyance, though once the game has completely loaded, it runs relatively well, with only rare hiccups. The game's biggest visual problem is one that should have been corrected prior to release: tiny menu text. Text isn't absolutely impossible to read, but trying to make out another eye-straining postmission report is unnecessarily uncomfortable and a silly oversight in a portable game.

You can eliminate some mission-based frustrations by playing with others, and multiplayer battles are lighthearted fun. You can play a limited version of the ad-hoc offering using a single copy of the game, though if you want to see Air Conflicts at its best, every player will need their own disc. There are close to two dozen environments available, and the host chooses from a few different weather and seasonal options. Aircraft can be customized with several camouflage options, and once you're in the sky, the action is amusing, especially if you somehow manage to get the maximum of eight pilots into the fray (it's too bad that online play isn't supported, given that it would dramatically increase the chances of such a dogfight). However, you and your friends will want to set ground rules for your battle; some planes come outfitted with an AI-controlled turret gunner that can quickly upset the balance of the match. A host-controlled option to limit aircraft types would have been a welcome one.

Many of the annoyances are small, but they add up. Thankfully, the game's main focus--exciting airborne battles--is done very well and ultimately trumps the flaws. Hopefully, the developer's next effort will include all of the flight-based fun but none of the superfluous frustrations that occasionally send Air Conflicts: Aces of World War II into a tailspin. 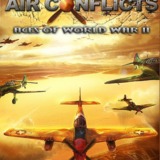 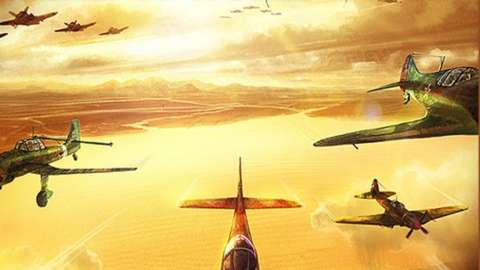 Air Conflicts is an arcade flight simulator game set in World War II, featuring the aircrafts of the period and historically inspired missions. The emphasis is on intense dogfights, daring bombing raids, and exciting aerial missions.