Agents of Mayhem isn't subtle. The single-player action-adventure game from Saints Row developer Volition is all about being larger than life, with intense superhero-versus-supervillain combat and raunchy protagonists who drop F-bombs as much as they drop real bombs. Unfortunately, the game doesn't offer much more than a "to the extreme" attitude, which wears out its welcome in record time thanks to incessantly recycled missions, numerous bugs, and a juvenile script that mistakes swearing for humor.

You take on the role of the titular Agents of MAYHEM (Multinational Agency for Hunting Evil Masterminds), a group of future superheroes that look and feel like the R-rated offspring of a union between the '80s G.I. Joe cartoon and the Agents of SHIELD TV show. The agents float above the world in a helicarrier-like fortress called the Ark, but you spend most of your time with them on the battlegrounds of Seoul, South Korea, a crisp and clean metropolis dotted with sky-high towers. It's there you wage war against the League of Evil Gentlemen Intent on Obliterating Nations.

Basic elements of the story and setting work well in establishing an initial mood and place. Seoul's skyscrapers, whitewashed future tech, and industrial design make it more than just a battleground. It's a little too sterile to embrace the quirkiness of something like Grand Theft Auto V's Los Santos, without cops or oddball characters wandering around muttering to themselves, but it's still a memorable location that feels alive in its own way.

Agents tackle LEGION in three-person squads, although they fight one at a time with you swapping them in and out depending on personal preference and the challenge at hand. Squads can be fully customized on the Ark before missions, and there are a dozen agents on the roster, each with skill and weaponry specialties that you earn as you level up.

Your heroes include: Hardtack, the hulking former naval officer who totes a shotgun and has a special harpoon attack, Kingpin, the rapping gang leader with an SMG, and Joule, the electro-blaster toting Italian fashionista, to name a few. Try as they might to elicit a laugh, the agents fail to be likeable characters. This is in part due to the tired tropes and stereotypes they embody. But look beyond their superficial flaws, and it's their dialogue--along with most of the writing in Agents of Mayhem--that will make you cringe the most.

The in-your-face attitude of the cast and the world around them wears thin, very fast. The entire game seems to have been scripted to the tastes of a 12-year-old boy, with non-stop swearing and ceaseless one-liners comprising the bulk of dialogue. "You want me to f--k it up? Don't you? Don't you?" insists Hardock before firing his Mayhem Mines. And cutscenes fall flat with jokes such as, "If you want to wear open-toed shoes, be sure and do some maintenance on your toenails," which is more reminiscent of a Madlibs short than a conscious attempt to be clever.

At least the villains are somewhat more interesting than the heroes. Boss battles feature the most engaging combat of the entire game, with gimmicks based around each villain's character and plot. But everything here still trips over failed attempts at humor. The most annoying examples have to be the missions that conclude with you taking down a boss's auto-tuner, and another where you defeat an enemy by shooting his "scrumptious" balls.

Repetition is the hallmark of the actual missions, though, no matter what villain you happen to be battling. You fight through the same corridors of the same underground LEGION lairs--which look like high-tech warehouses--spread throughout Seoul, killing the same helmeted troops over and over again. At first, the explosive combat is fun and impactful--when you fire a shotgun, or detonate some mines, or even just launch an arrow, you feel it--but you quickly get worn down by doing the same things on repeat. It doesn't take long for the game's initially exciting explosions to fade into the background.

Missions are also bizarrely constructed. You engage a mission, beam down from the Ark to a Seoul warp point, then visit more than one checkpoints on your way to the actual starting position, and finally arrive at your destination to actually begin the mission you just spent the last few minutes winding up. In most cases, missions involve a lot of pointless traveling across the city, for no apparent purpose aside from stretching things out. Sometimes you have to make your way to the tops of buildings to keep things rolling, again often for no clear reason.

To top everything off, there are a number of bugs you have to contend with as well. Button presses regularly don't work, and it's not uncommon to find yourself incapable of swapping out agents despite meeting the necessary conditions. You will also end up inexplicably locked in cars, and the only way to fix the issue is by reloading an old save or ramming the car into your surroundings until it explodes--the agent behind the wheel dies, but you came back to life as another. Mission objectives and waypoints frequently bug out as well, sometimes appearing when they are no longer relevant, and other times not appearing at all.

Personality can only take a broken and repetitive game so far. The attitude behind Agents of Mayhem has potential, at least if it's executed properly. But there's little to Agents of Mayhem beyond its foul-mouthed and bombastic attitude, which push the game into grating and obnoxious territory. Throw in the poor mission design and bugs, and you've got a game with loads of mayhem, but not much else.

View Comments (270)
Back To Top
4
Poor
About GameSpot Reviews 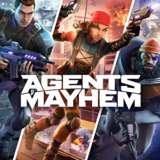 Brett played 35 hours of the PS4 version of Agents of Mayem for the purpose of this review, using a complimentary copy of the game provided by the publisher. 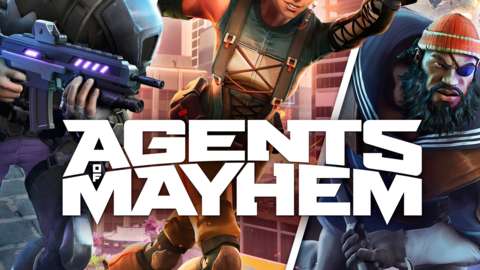 Agents of Mayhem is an open-world epic coming to Xbox One, PlayStation 4 and PC.