Age of Empires: The Age of Kings Review

The hit PC real-time strategy series goes turn-based in this well-designed translation, which packs a surprising amount of historic battles into a small package.

Talk about a pleasant surprise. Age of Empires for the Nintendo DS shares its name with the popular and long-running PC real-time strategy game series, but it's been completely redesigned to play well on a portable system. Specifically, this is a turn-based strategy game that plays much more like Advance Wars than like previous Age of Empires games, which force you to be very quick with the mouse and keyboard in order to succeed. Yet almost all of the elements that made the original version of Age of Empires II so great are still here, despite such a fundamental change to the gameplay. There are a few relatively minor issues with Age of Empires for the DS, but for the most part, this is a fun, deep, and addictive strategy game that packs in a good history lesson to boot.

Last year's long-awaited Age of Empires III took the series into the colonial era, but this game takes the conquest back to the medieval ages, where armies lived and died primarily by the sword. The game features five different playable factions: The Franks, the Japanese, the Mongols, the Saracens, and the Britons. That's fewer than you might expect if you're familiar with Age of Empires II, but you'll appreciate having the ability to recruit unique mercenary units from other civilizations, such as Persian war elephants, Viking berserkers, or rifle-wielding Turkish janissaries. Each faction gets its own single-player campaign spanning five or six missions (big missions in most cases). The game does a great job of infusing these campaigns with storylines based around the trials and tribulations of some of history's greatest military heroes: Joan of Arc, Yoshitsune Minamoto, Genghis Khan, Saladin, and Richard the Lionheart. The stories mostly unfold between missions, but they're well written and engaging, so you might just come away from this game eager to learn more about these great tacticians. More importantly, the campaign missions are generally diverse and interesting, challenging you to make some tough decisions, tempting you with optional objectives, and surprising you with occasional twists. You can play the campaigns in any order, though they're successively more difficult, and you must play through the missions themselves linearly.

The campaigns could easily last you more than 20 hours, and at that point, you've still got skirmish matches and multiplayer battles to explore. Skirmish matches can include up to four human or computer-controlled players, and there's a wide selection of maps to choose from (though there's no option to make your own maps). Multiplayer supports local wireless play if you've got friends with their own copies of the game, though luckily, there's a pass-and-play option as well. Because this is a turn-based game, it's actually pretty convenient to pass the DS from one player to the next between turns. The multiplayer options are nice to have, but thankfully the computer artificial intelligence puts up a solid fight. Multiple AI personalities and difficulty settings are available as well. What's more, as you finish campaign missions, you earn points with which you can unlock some new units and a bunch of new maps. In case it isn't already clear, there's a lot of stuff to play in here.

The game initially looks like Age of Empires II, and even though it's turn-based, a lot of tried-and-true real-time strategy conventions carry over. You'll be looking at a map from an isometric perspective on the bottom screen, while the top screen shows you detailed information about different terrain, buildings, and unit types. During your turn, you can move all your units, engage in battles, build structures, and conduct research. Then, when you choose to call it a day, your allies or opponents do the same, and so it goes until either you win or you lose. The game does a good job of preserving the task of having to build up a base and establish an economy, but without miring you down in micromanagement. You do need food and gold to train units, build structures, and research new technologies, and you get it simply by having villagers construct mills on wheat fields or mines on gold deposits. Then you get additional resources each new turn, enabling you to fund your war machine.

Building a diverse military force is the key to victory, since every unit type is effective against some other unit type. For example, swordsmen, cavalry, and spearmen have a rock-paper-scissors-style relationship, so as tempting as it might be to recruit a horde of knights on horseback, your opponent could easily counter you just by training a bunch of inexpensive spear-wielding troops. Of course, things get to be more complex than that once you factor in various long-range units like archers and skirmishers, siege weapons like battering rams and trebuchets, and more. On top of that, you constantly need to weigh the benefits of training more units versus using your resources to improve your technology. With enough research and spare resources, you can "age up" to the next stage of your civilization's history, which makes your units stronger and gives you access to new types of troops, buildings, and technology. So there's a technological race happening in the background even as your military clashes with your enemy.

The main issues with Age of Empires for the DS are mechanical or cosmetic. You can't scroll the screen that quickly whether you're using the D pad or the stylus to play, so on larger maps, the action starts to feel a bit sluggish. What's more, battles containing multiple opponents also tend to bog down, since the AI noticeably takes time to think through its turn. As for the problems with the presentation, the map graphics--while attractive in general--can start to clutter up badly when you've got a lot of units and buildings in close proximity. You've still got the detailed view on the top screen to help inform you, but things can get confusing at a glance. Finally, the game's great-looking battle sequences are reminiscent of the clashes between armies in Advance Wars, but in time, you'll want to skip them. You can, but the game doesn't give you good feedback about a battle unless you watch it. Killed units simply disappear from the map without any sort of visual or audio cue. These types of setbacks really don't do much to hurt Age of Empires, but they do detract from it a little.

The presentation of Age of Empires for DS is mostly great, though. Rousing (but repetitive) musical themes aptly fit each of the different factions, and sound effects for screams, acknowledgments, clashing swords, and such were mostly lifted from Age of Empires II and get the job done well. Meanwhile, there's unique artwork for the different campaigns and all the dozens of technologies you can research, and watching the smoothly animated armies clash on the top screen can be genuinely exciting. So even though there's a fine strategy game underneath it all, Age of Empires doesn't skimp on the quality of its presentation. In short, if you're on the hunt for another portable strategy game to keep you busy either for hours on end or for a few minutes at a time, don't hesitate to check this one out. 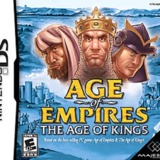 Age of Empires: The Age of Kings
Follow
$19.99 on Walmart
Buy 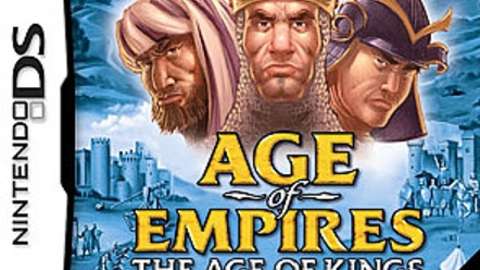 Age of Empires: The Age of Kings

The Age of Empires series can now go where you do with Age of Empires: The Age of Kings for the Nintendo DS. You can engage in turn-based gameplay as you battle five different civilizations with more than 45 unique unit types.

8.2
Sign In to rate Age of Empires: The Age of Kings