The sleek, superficial action of After Burner Climax is thrilling in short bursts but not deep enough to last.

Sega's After Burner arcade games of the late 1980s took the full-throttle fighter-jet action depicted in films like Top Gun to its most outrageous extreme. Unconcerned with any degree of realism, the games were a simple but thrilling fantasy, fueled by then-stunning graphics, a pulse-pounding soundtrack, and impressive hydraulic arcade cabinets that would tilt your seat as you tilted the in-game plane. The 2006 arcade release of After Burner Climax stayed very true to the spirit of the earlier games, updating the visuals considerably but leaving the core gameplay largely unchanged. Climax has now come to home consoles, but its particular brand of action is really a better fit for arcades. It's exciting for a brief period but not deep or substantial enough to hold your attention for very long or to justify its $10 price tag.

Climax kicks off by letting you choose among three aircraft: the F/A-18E/F Super Hornet, F-15E Strike Eagle, and F-14D Super Tomcat. Then, following a short scene explaining that your mission is to prevent a hostile nation from launching a nuclear strike, you find yourself flying at breakneck speeds as squadron after squadron of enemy fighters send impossible numbers of missiles at you. You have guns for close-range enemies and missiles for targets that are farther away. Banking and tilting your plane so that your targeting cursor moves over enemies instantly results in lock-ons, letting you unleash a barrage of your constantly recharging missiles to blow your targets from the sky. All the while, you'll be trying to bank and roll to avoid the missiles streaking in your direction.

There are a few new elements that set Climax apart from earlier After Burner games. Here, you're given the occasional special objective. These include destroying helicopters carrying enemy ground troops, and increasing your speed to tail a stealth bomber that is immune to missile locks and taking it out with guns. There are also some branching pathways and some levels where you fly through the interiors of cavernous enemy bases. Additionally, as you take out enemies, you fill up your climax gauge. When triggered, this ability briefly slows down time, which dramatically increases the size of your targeting cursor, making it easy to lock on to and destroy a large number of enemies. But these are all minor additions; not game changers. This is still fast and fun arcade action for the 10-12 minutes or so it'll take skilled players to reach the ending, but the lock-on-and-shoot action doesn't offer enough depth or variety to stand up well to multiple play-throughs.

In an effort to add replay value to Climax's home version, Sega has included a secret final stage and a wide variety of special options that you unlock as you play the Arcade mode and accomplish various tasks. For instance, Reaching the ending once lets you play with your targeting cursor enlarged to climax-mode proportions at all times. Downing 70 percent of the enemies in a stage 10 times gives you access to armor that reduces all damage by half. For those who enjoy a challenge, there are also a few unlockable options that make the game more difficult by reducing your gun's power or your armor's effectiveness, preventing missiles from replenishing, and the like. These options are fun to tinker around with, and it can be satisfying to tear through the enemy with numerous options tilting the odds dramatically in your favor.

The visuals are glossy, gorgeous, and very, very fast. The grasslands, cities, erupting volcanoes, and other spectacular environments look great as they whisk by at incredible speed. They're also all bright and pristine, contributing to the overall sense that the game is much more rooted in fantasy than reality. The screen constantly fills with explosions and smoke trails, which look terrific, but which occasionally make it difficult to identify where threats are coming from. (You'll eventually unlock options that let you turn these effects off in the Arcade mode, but the resulting absence of any such effects just doesn't look right.) For music, you can listen either to the tunes composed for Climax or to the After Burner II soundtrack, which still sounds great. And in a detail that will please fans of the earlier games, selecting this music also results in the distinctive After Burner II sound effect of a voice saying "Fire!" each time you lock on to a target.

Of course, there's much more that goes into the measure of a game than its duration, but there's no denying that a 10-minute arcade experience is very short by today's standards. A few players may find enjoyment in honing their enemy-targeting, missile-dodging skills and climbing the leaderboards of the Score Attack mode, but most will find that the immediate allure Climax offers wears off rather quickly. If only it came with a hydraulic moving chair, then it would have really been something. 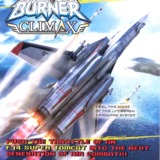 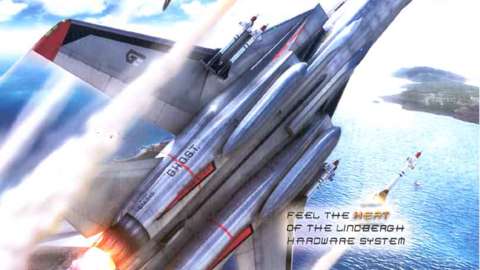 The classic After Burner series returns to the arcade.