Act of War has everything that you want in a military-themed real-time strategy game, from excellent visuals to even better gameplay.

It's hard to believe that in 2005, someone somewhere had the audacity to make a real-time strategy game stuffed with live action cutscenes. It's even harder to believe that it works. Yet with Act of War: Direct Action, Atari and developer Eugen Systems have managed to turn convention on its head. Here's a real-time strategy game with the soul of a sleek techno-thriller, stitched together with live action footage that, despite the acting and budgetary limitations, will remind you of the riveting television drama 24 at times. And if that weren't enough, it's also a visually splendid, exciting, and well-paced game, to boot.

The last time anyone attempted anything quite like Act of War was 2000's Command & Conquer Red Alert 2. But where Red Alert 2 played entirely for camp, Act of War goes for grit. The game feels very much like a Tom Clancy-penned techno-thriller. Or, to be more exact, a Dale Brown techno-thriller, as Brown, a best-selling author, worked with the French team at Eugen to create a story about a looming energy crisis (Americans pay $7 for a gallon of gas) and how an international criminal conspiracy is perpetuating it. Act of War's opening introductory movie, cleverly placed so you watch it during the lengthy installation process, lays the groundwork, but the fun starts in the game's opening missions, where you'll discover that you're in for something more than the usual real-time strategy experience.

In Act of War, you assume the role of Major Jason Richter, the commander of Task Force Talon, an elite direct action force equipped with state-of-art weaponry and tasked with conducting the toughest jobs. From the get-go, your team will assault a terrorist training camp in the desert, and then battle around London in a running gunfight that shows off the game's excellent urban settings. Blended in the opening levels are a mix of live action, computer-generated, and in-engine cutscenes that enhance what's onscreen. While the acting isn't on par with what is found in motion pictures or television (it's also downright bad at times), the live action scenes are impressive, especially since we've rarely seen anything of this scale in gaming. For example, one of the highlights is watching a street protest erupt into a gun battle, with commandos and bodyguards taking fire from behind armored limousines. There are very little blue-screen effects in that scene, as most of it was shot outside with a large number of actors and extras.

There's so much live action footage at the beginning of the game that you get the feeling that you're taking part in an interactive movie. However, after the opening levels, the game segues into a more conventional real-time strategy game along the lines of Command & Conquer. There are three factions: the US Army, Task Force Talon, and the Consortium, the evil conspiracy in the game. Thankfully, there is no contrived plot device where you play as each of the three factions, so you don't get to play as the Consortium in single-player, though it is playable in skirmish and multiplayer. As expected, each faction has its own strengths and weaknesses. The Army packs a lot of firepower, but it requires an extensive amount of base-building to unlock the most potent weapons; Task Force Talon is a lot more versatile and mobile, but its high-tech equipment is expensive; and the Consortium can churn out lots of low-level units relatively cheaply. While the three factions are fairly diverse, there are still some clearly equivalent units on each side. And, if anything, the US Army and Task Force Talon are fairly interchangeable, since both belong to the same side.

In terms of gameplay, Act of War doesn't really do much that is notably new, but it does everything remarkably well. This is a real-time strategy game that has a great balance between resource-gathering and combat, and it never feels like one outweighs the other, like it tends to in so many other RTS games. And part of the reason for this balance is because the only resource in the game--money--can be generated in so many ways. You can build an oil derrick and refinery to harvest oil, but you can also capture prisoners, which grants a bounty. Not only that, but holding prisoners also generates cash over time, so it's worth your while to capture and hold as many prisoners as possible. Finally, since many of the game's battles take place in urban settings, such as London and Washington DC, there are banks and treasury buildings that your infantry can seize to generate cash. This aspect is particularly important, because it will force you to venture out to seize and defend these buildings early on in a mission, bringing you into contact with the enemy quickly.

Act of War really conveys the feel of urban combat effectively. In many other real-time strategy games, buildings are treated as inanimate obstacles on the map. However, in Act of War, buildings are actually buildings, and they can be stuffed with infantry and antitank teams to create strongpoints on the map. Trying to run vehicles and armor through a gauntlet of infantry-held buildings can be a nightmare, so you can spend time blasting each building into rubble (which is a glorious visual effect) or send in assault teams to clear them out. If anything, urban combat isn't just cool and realistic, it finally makes infantry useful once again in real-time strategy. In most RTS games, infantry are nothing more than speed bumps against vehicles. But not here; hole up some antitank teams in a building and you can give infantry the punch they've been missing.

This game shines in a way that really showcases the combined arms nature of modern warfare. Each weapon and system has amazing strengths as well as glaring weaknesses, so it's important to strike a balance. Getting an effective combined arms effort with vehicles, armor, helicopters, aircraft, and infantry is quite fulfilling. These little moments are captured here, like when a medevac helicopter swoops in to take the wounded off the battlefield, or when Apache helicopters shred infantry on the ground with their chainguns. However, trying to micromanage all these little elements can be a bit overwhelming at times. You almost wish for a pause button so you can issue orders to all of your men, because the few seconds it takes to click on each unit and give orders can easily mean death. And the pathfinding is also a bit wonky at times, especially if you have a lot of units trying to get to the same place. It's possible to see them take weird detours or get lost every now and then.

The single-player campaign of Act of War is also fairly short, as it only runs the length of about 10 to 12 missions. And as good as the story is when it starts, it also flames out a bit at the end. The plot stretches incredulity, and some of the acting (and accents) go from annoying to simply bad. The biggest weakness is the lack of clear resolution, as there are several key questions that never get answered. However, judging from the game's appended name, the designers are probably betting that they'll get a chance to make a second Act of War game to keep the story going.

Act of War's skirmish and multiplayer suite extend the game's life. The skirmish mode lets you battle up to seven computer opponents on a series of premade maps. Meanwhile, the multiplayer mode is fairly par for the course in terms of feature sets, though it's nice that a persistent tally of your performance is kept so that you can easily gauge the skill level of your opponent in terms of wins and losses. The multiplayer supports up to eight players, and you can divide into teams. As expected, the gameplay can be quite fast-paced, and it's usually a race to see who can build up the heaviest tanks first in order to swamp your opponent, which is quite a change of pace from the single-player campaign. The AI can be particularly brutal at the hardest level, but it's fairly accommodating at the easy and medium levels, so if you're not used to playing against cutthroat opponents, multiplayer can be an eye-opener. Even though the game just came out, there are a fair number of players online already.

Visually, Act of War is a great-looking game, stuffed with all sorts of high-end eye candy and beautiful graphics. When buildings and vehicles explode, which they often do, they explode gloriously, with smoke so thick that it's almost debilitating at times. At the highest detail settings, the game delivers the sense that you're really battling in cities. There are so many little details, such as the way buildings crumble from weapon fire or how destroyed fire hydrants shoot sprays of water into the air. The sound effects are also very good, although they're so generic for the genre that you feel like you've heard them before. The game itself is fairly stable, and aside from a few gameplay bugs, we didn't experience any instability. Atari has already issued a patch to address some of the minor issues. The only downside is that the patch invalidates earlier saved games, so make sure that you download the patch prior to starting a campaign.

Put it all together and Act of War is an excellent real-time strategy game, packed with great gameplay and beautiful visuals. This is one that's good enough to unseat Command & Conquer's grip on the military-themed real-time strategy genre. Add the game's impressive production values and techno-thriller plot, and you have nothing less than an early candidate for strategy game of the year. 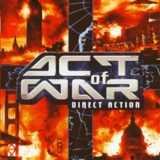