This madcap adventure tests your detective skills in brand new environments with an immersive story, and a twist on old gameplay elements keeps things interesting.

Although Ace Attorney Investigations: Miles Edgeworth is a spin-off from the original Phoenix Wright and Apollo Justice games, it lacks none of the magic of its predecessors. Playing detective is as much fun as ever, with cool new features like third-person view, updated gameplay elements, and settings outside the courtroom to make things more interesting this time around. This is a game with depth and variety that effortlessly ties its elements together with a rich and engaging story. It's a little easy at times, and playing as Miles Edgeworth takes some getting used to, but the witty dialogue, colourful characters, and exciting gameplay turn Ace Attorney Investigations into a satisfying adventure.

Ace Attorney Investigations centres on an entirely new story and protagonist in the shape of Miles Edgeworth, who is a level-headed prosecutor from previous Ace Attorney games (likes: justice and correct grammar; hates: incompetence). Each of the five chapters in the game focuses on a new case that is tied to the one before it, and eventually, the intertwining storylines are brought together. After dealing with a mysterious murder in his office, Miles gets caught up investigating an international smuggling ring, which in turn leads him to search for a mysterious thief called the Yatagarasu. His partner in crime (or is that justice?) is the bumbling and affable detective Dick Gumshoe. Dick is a returning character from the old series who will occasionally step aside from his role as sidekick to make way for new characters, as well as familiar ones. First, there is newcomer Kay--a sweet 17-year-old orphan who claims to be a great thief herself. Then, there is another returning character: feisty Franziska von Karma (likes: whipping people; dislikes: not whipping people). Of course, new circumstances call for new characters, and the game is full of wacky and perverse people that jump out from behind every corner to either help or hinder your journey to the truth. Always entertaining, these colourful personages help keep things interesting.

The problem--at least at the very beginning of the game--is Miles himself. Regardless of his many nicknames, Edgey is a straightlaced prosecutor with a nagging disposition to always let justice prevail. He's not as goofy or immediately engaging as Phoenix Wright or even Apollo Justice. His sense of humour is kind of dry, and he's always correcting people on grammar usage or the correct application of the law. The game tries a little too hard to make Miles likeable--there are too many exaggerated facial expressions, as well as hurtful jabs at Gumshoe and his paycheck. Thankfully, this eases up as the game progresses, and Miles actually prevails as somewhat of a softie. This is helped along by his inner dialogue, which goes a long way in providing some insight into what most people have always assumed to be a rather drab character.

The depth and intricacy of the story makes it hard to put the game down. It often allows you to think you've worked things out before dropping a very large spanner in the works, but this makes it all the more fun. Figuring out what happened--and why--is the best part. And, successfully doing so will leave you with a very satisfying feeling of accomplishment. The essence of the game is in its story, and there is a great, as well as engaging, one. As usual, the dialogue is also witty, intuitive, and often very, very funny. And, the game takes care to be friendly to newcomers to the series whilst acknowledging its old fan base. While you don't need to have played the other Ace Attorney games to understand what's happening, those already familiar with a character's background will get an extra kick out the familiar in-jokes placed here and there.

While not much has changed from other Ace Attorney games in the way the narrative unfolds--slow paced, linear, and heavily text based--Investigations is not a clone of its predecessors. Instead of two distinct investigation and courtroom sessions, which required players to collect evidence from different crime scenes then present it a courtroom while listening to witness testimonies, as well as performing cross-examination that was predominantly in a first-person view, the game has tweaked some things in the main components of gameplay. The first of these changes is the third-person view, in which most of the action will unfold (occasionally switching to first-person view when important pieces of evidence call for close examination).

The second addition is the investigation element of the gameplay and the complete removal of the courtroom element. Miles is now free to walk around his environment, examine clues, and interrogate those around him; you'll be able to control Miles by sliding the DS stylus within a designated map layout on the bottom screen of the console. During this aspect of gameplay, Miles will be able to make use of two new puzzle-solving techniques: logic, which allows him to connect two thoughts together to come to a conclusion that will reveal a new clue; and deduce, which appears when there's a contradiction in the evidence. Finally, because Ace Attorney Investigations takes the action away from the courtroom, an element has been added that mirrors the quintessential Ace Attorney battles. Like in previous games, you're still given an opportunity to listen to people's testimonies, cross-examine them, and press them for details then present relevant evidence that contradicts what they're saying. The only change is that this can now happen anywhere or anytime (usually quite often), and Miles never has to step foot inside a courtroom.

When working together, these varied gameplay elements are absorbing and fun, and they balance out the slow-paced nature of the story. The only problem is that they're not particularly challenging. The game doesn't increase in difficulty, which means the hints that Miles and his supporters are prone to giving tend to continue throughout the game. This can be frustrating--part of the satisfaction of playing a game like this is the knowledge that you've used your own brain to work something out. This doesn't happen throughout all the cases, but it's not often you'll be left entirely to your own devices.

Then again, you'll never want for something to do, which means you won't really care whether things get a bit simplistic at times. If not in the middle of an investigation, Miles will be busy listening to a testimony, cross-examining a witness, or using his deductive reasoning. Exploring new environments without the restriction of a courtroom is great too. With such places as the inside of a first-class lounge, the haunted halls of a deserted amusement park, or the plush surrounds of an embassy, there is a lot to be examined and uncovered. Sure, it's not the same as walking around an open-world environment and you'll still be restricted as to where you can or can't go, but it's just interesting not being stuck in a courtroom all the time. This also gives way for a more creative way to play: Miles is not merely walking out of a case and into the next one but instead finding himself in rather tricky situations from time to time (see: murder suspect, kidnap victim, object of womanly affection).

The game is well presented on the DS, complete with full-motion cutscenes, characters full of colour and detail, and beautifully drawn environments. The music, too, is as catchy as always in all its synth glory, with some orchestral passages added here and there in the more dramatic moments.

Ace Attorney Investigations: Miles Edgeworth is a strong adventure game with an intricate storyline and a successful twist on the gameplay formula of its predecessors. Its text-based narrative is slow but solid, while new gameplay elements with the chance to explore the world outside the courtroom make for a lot of tight situations, charming locations, and madcap characters. Solving puzzles is always a lot of fun, and the return of some familiar faces from the series will make returning players feel welcome. Tying everything together is an intricate and layered storyline that will have the kid inside you thrilled to the end. 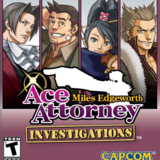