With gentle, idyllic charm, A Short Hike is a delightful vignette about the joys of hiking and meeting new friends.

Hiking in the digital wilderness of A Short Hike is a reminder of the small joys of stretching your legs out on the trails. Its pixelated habitat is saturated with the familiar sights and sounds of the backcountry in real life--like the bubbling of a sluggish stream through the woods or greeting fellow hikers as they trek along the steep edges of grassy plateaus. As a young canary named Claire, one of the first characters you'll come across is a pint-sized frog at the beach in Hawk Peak Provincial Park, who's clearly struggling with building a sandcastle. Her problem, unfortunately, is that she's heaving a full-sized shovel about, a clunky tool unfit for the refined job of sand sculpting. You can hand her a toy shovel, and over time, see her modest sandcastle gradually expand into a sprawling sand empire--simply a charming, heart-swelling sight.

This is just one of the many minute scenes you'll embrace in A Short Hike, an exploration title about trudging across a park's hilly terrains and muddy routes. It's a game with a simple, singular objective: Trek towards the summit of Hawk Peak Mountain, as that's the only place with any cellphone reception. While this sounds scant, there are plenty of activities you'll need to busy yourself with in order to get to the top. You can collect seashells and sticks along the way, help other hikers out with their problems, or cast your hook into the tranquil rivers in hopes of snagging a rare fish. Doing these tend to net you some rewards, be it in the form of gold feathers--one of the most essential items in the game--or an assortment of tools and accessories. While some of these are purely cosmetic, others unlock more abilities for Claire, like the capacity to sprint, fly further, or bounce high on the island's fantastical plants.

It's tempting to see these as mere side-quests to complete, but that defeats the point of these experiences--the real reward is in enjoying the plain beauty of these mundane moments. That's by no means a narrative flaw; it's these small instances that encapsulate the grandeur of traversing through A Short Hike's large, mountainous landscapes. Interactions with fellow visitors, like following along on an anxious painter's journey to seek inspiration in nature, an elusive endeavour even in this picturesque landscape, usually culminate in heartwarming conclusions. Other encounters also make for quietly humorous anecdotes, much like a private joke you recall sharing with close friends.

The game's colourful roster of anthropomorphic characters is a delight too, from the zealous members of the resident climbing club to another mountaineer who has lost his camp permit to a hungry fish. More satisfyingly enjoyable than just these scenes, however, is the discovery of curios that are hidden within the lush forests of oak and amidst derelict structures. There's genuine, compact joy in chancing upon sights like a deserted pond, an abandoned lighthouse, or some of the island's wondrous flora and fauna.

At the same time, Claire--a particularly dexterous bird--makes wandering about the park a breeze. A Short Hike keeps things simple--the crux of her abilities is dependent on the aforementioned golden feathers, which function as a stamina bar of sorts that allows her to perform her maneuvers with more pizazz. Claire is not only capable of pattering along the tracks with her feet, but can also fly, glide, and swim, as well as climb up even precipitous cliffs as a spry, young bird. Even slipping off a tall mountain doesn't do much harm to her other than a slightly bruised ego and perhaps a few minutes of wasted effort.

By climbing greater heights and performing double-jumps in mid-air with these coveted feathers, Claire's enhanced moves allow her to traipse across the rough terrains of the park freely, truly encouraging exploration while allowing you to do so at your own comfortable rhythm. Although getting to the top of Hawk Peak mountain does require quite a number of feathers, these can fortunately be found in a variety of ways--out in the open, tucked away in nooks and crannies, or sold in limited supplies from the visitor's centre or a suspicious, broody scalper. That said, you're never punished for not being thorough in your search. Even if you're not in the mood to explore, it's possible to gather enough feathers to reach the peak just by carrying out some odd jobs and unearthing them in the form of buried treasure.

To coincide with the release of A Short Hike on the Nintendo Switch, developer Adam Robinson-Yu has updated the game with some new content. One update includes navigating the high seas around the park on a spanking new motorboat. Claire can drive this bad boy with wild abandon, tapping its ultra-advanced, high-revving engine to race around the surrounding waters and dock at nearby islands. It's a welcome upgrade from swimming great distances from coast to coast and offers another alternative to discovering more facets to Hawk Peak. You also get to spend time with a new friend: a bored, thrill-seeking adolescent who offers to accompany you on your ride across the park. The interactions with Claire are genuinely hilarious and kept me smiling for a while.

Many games often aspire to deliver more, sometimes bartering in dizzying excesses--be it in high-octane action or through big, sweeping narratives that thrust you into a heroic position. But it's the diminutive tales and everyday experiences of A Short Hike that give the game its comforting, even pastoral allure. It's about seeking quiet communion with nature even as you make your umpteenth hike towards the peak, or finding contentment in stumbling upon tinier, quaint scenes. It proposes that even the smallest and most mundane of vignettes can be as enthralling as grandiose universes and narratives of more ambitious games. As I embark on yet another leisurely trek after ascending the summit of Hawk Peak, I can't help but heartily agree. 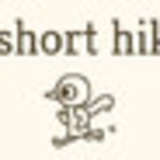 Khee Hoon has played A Short Hike across two platforms--first on PC and then again on Nintendo Switch--devoting about three hours to each playthrough.