This throwback adventure does a good job of scratching that nostalgic itch.

If imitation is the sincerest form of flattery, then 3D Dot Game Heroes just whipped out an engagement ring on its first date with The Legend of Zelda. Squint your eyes and imagine that the smooth contour of the ergonomic controller in your hands has four sharp corners, and you could be tricked into believing you're playing through an unreleased sequel to the very first game in the classic Nintendo franchise. 3D Heroes may be an unabashed homage to a 23-year-old game, but it does a fine job of zeroing in on what made Zelda such an amazing adventure and re-creates those simple joys quite well. Unfortunately, the difficulty takes its cues from modern releases, making the dungeons a little too easy compared to the game on which this is based. But there are so many secrets to discover, jokes to laugh at, and environments to explore that 3D Heroes is a enjoyable game for anyone who longs for an old school adventure.

Although 3D Heroes takes most of its cues from the NES classic, its art style is all its own. The world is composed of tiny blocks, making the characters, enemies, and even the environment feel like parts from a sparsely detailed childhood toy. Its charming aesthetic creates an endearing backdrop that makes this adventure easy to get sucked into from the moment you fire it up. This simple design paves the way for a creation tool that lets you craft your own hero to save this mythical world from the dreaded dark wizard. The process is painless. Within just a few minutes, you can transform whatever resides in your imagination into your in-game avatar, tweaking your creation so it can walk, fight, and even strike a victory pose. You can play through the whole adventure as a shark, tank, or robotic tree, and you can switch up your hero whenever you load a saved game. The only downside is that the creation tool is limited to the protagonist. It's a shame you can't design the enemies you fight, the world you explore, or the labyrinths you traverse.

Once you decide on a character, it's time to free the world from the clutches of evil. 3D Heroes is played from a top-down perspective, and though the overworld is vast, there's always a flashing red dot guiding you to the next dungeon you have to conquer. Because of this, you’re never at a loss for where you need to go next, but that doesn't mean everything is handed to you. There are so many secrets to discover that it's possible to wander around for hours seeking out treasure-filled caves or tucked-away chests. And that's the most impressive aspect of 3D Heroes. The game is loads of fun even when you aren't scratching things off your to-do list. Though the combat may be simple, that doesn't detract from the joy of slicing a pirouetting spider with your sword or shooting a water monster with a well-placed arrow. But the real thrill comes from finding the countless treasures just off the beaten path. This is a wonderfully designed overworld that constantly introduces tempting rewards to keep you entertained.

The dungeons are not quite up to the level of the fantastic overworld, but the aggressive enemies and mazelike designs keep things interesting. Going toe-to-toe with a vanishing mage or lumbering ogre is always exciting, even though the abundance of health potions means you won't have to fear death. These underground labyrinths are also where you acquire secondary weapons, which include a boomerang, bombs, a grappling hook, and other predictable tools to help you on your quest. Puzzles associated with these items don't veer far from what has been done in similar games. Far-away switches must be hit by a boomerang, flimsy walls can be bombed through, and targets are just asking to be struck by an arrow. Because the puzzles rely on such traditional solutions, your progress will rarely be halted by a nasty head-scratcher. Rather, just making your way through the winding paths is where the challenge surfaces. The multitiered dungeons require keen map-reading skills to navigate, and figuring out how to reach an elusive room on the other side of the map requires careful planning. Although the individual puzzles rarely offer more than a slight setback, the intricately structured dungeons are exciting to play through as you try to reach the tantalizing end.

The boss fights waiting for you at the end are the only instances in 3D Heroes where you'll be challenged in combat. These giant monsters are quite difficult if you come to battle unprepared, but their pattern-based movement makes it seem like victory is attainable even when you find your life sapped from your body. What really ups the challenge is that, rather than requiring gimmicky uses of the new item you recently picked up, bosses are most vulnerable to your trusty sword. They demand swift slashing and deft footwork, forcing you to hone your basic skills to a fine point. Each of these foes is fast and deadly, stripping away your life with only a few hits if you aren't nimble enough. There's not always an easy solution to victory, either. Often you'll need to guard well, strike when your foes leave an opening, and just hope you can deal enough damage before they take you down. The bosses are a high point in this adventure and are the most rewarding and thrilling combat sections in the game.

3D Heroes can be finished in fewer than 10 hours if you focus on beating the seven dungeons, but there are many more hours tucked away if you want to get the full experience. There are countless side quests to partake in, and completing them gives you all sorts of fancy rewards for your efforts. Most of the optional missions are time based, appearing only for a little while and disappearing forever when you complete the next dungeon. Because of this, you need to make frequent trips to the various villages to see who needs a helping hand, which can be draining if you aren't sure what needs to be done. Thankfully, you can warp between places in just a few seconds, but because there are so few hints to guide you on these side quests, it's easy to miss something important and never get a second chance to complete it. However, if you're patient and eager to explore, there are plenty of hidden treasures to keep you occupied for hours.

3D Heroes is a refreshing trip down memory lane. Other adventure games, including the franchise this is based on, have gotten so complex from a combat and exploration perspective that it's nice to take a vacation from all the modern bells and whistles and experience something simple again. There isn't a lot in 3D Heroes that hasn't been done before, but that doesn't detract from the fun. The bustling overworld is bursting with silly side quests and secret goodies, and though the dungeons aren't particularly hard, the bosses at the end sure know how to put up a fight. The lighthearted atmosphere strengthens the appeal, throwing in quirky characters, chuckle-worthy references, and an infectious soundtrack to keep things fresh. 3D Dot Game Heroes is a pleasant retreat for anyone who pines for the good old days, but even those without nostalgic links to the past will find an enjoyable experience. 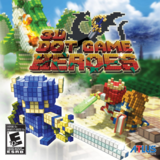 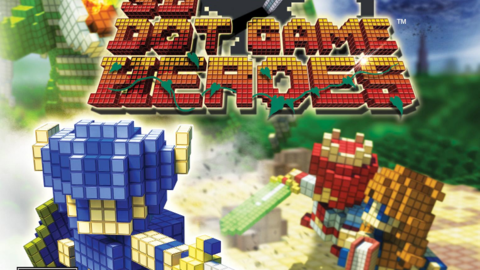