1080 Snowboarding is one of the best snowboarding games available on any system. It's an exhilarating-looking game with a great combo-driven trick system and tracks that are actually fun to race. It also requires a lot more skill than most of the competition.

Graphically, 1080 delivers smooth, evenly scrolling downhill tracks and half pipes. There's little, if any, polygon dropout in the riders, the backgrounds, or the tracks. Each of the tracks is stylistically different, too, from Crystal Mountain's dense fog, thick powder, and realistic snow and ice effects - it's actually snowing onscreen, and it looks great - to Golden Forest's clear skies, narrow trenches, and warm mountain treescapes. The most striking visual element of the game is the undeniable sensation of speed. 1080 looks and feels very fast. The track really blurs by, and you feel every turn. The only visual shortcoming is in the slowdown that occurs when you race through on-track trees, which is a great effect and a hair-raising test of skill, but causes a noticeable lag.

Control is thoroughly involving. The crouch move alone - which makes for supertight turns - makes this fun to play. The physics model is very solid throughout. 1080 Snowboarding features five different riders and eight different boards. The inclusion of a balance statistic in the riders' profiles makes for many different styles of play, and control varies throughout, depending on the rider and board combination selected. Riders range from cute little folks who don't move too fast but can really cut up the track, to Dennis Rodman-looking giants travelling at 120mph who can barely stand up. Unlike a lot of snowboarding games, landings are not automatic, so you've really got to earn those big jumps by learning how to finish them without crashing. This brings us to the issue of skill.

From Indy nosebone 540's to stalefish to mute grab 720's, all the usual tricks are here, but this time around they require a lot more skill in execution. Though a lot of the grabs are simple, two-button moves, the big rotations are executed with combos. That is, unlike a lot of snowboarding games, in which the angular prowess of each jump is decided simply by the length of time you've held down a button, in this game, you need to master a fairly intricate combo to pull off the big payback 1080-degree spins. In addition, the tracks vary in powder thickness, which has a big impact on speed and maneuverability. Some tracks have ice on them too, which is a much more dangerous surface - with refreshingly realistic physics. Since the game features a damage meter that can pull you out of a race after one too many falls, 1080 Snowboarding's varying terrain, coupled with the skill required to land after the more grandiose moves, requires a higher degree of finesse than most of the competition.

Unlike a lot of snowboarding games, whose half pipe modes are their only real thrill, the 1080's downhill races and time trials are great. The tracks are treacherous, and each is different from the last. Moguls, giant drops, and impossible curves are littered throughout. When time limits are imposed, it's not with occasional banners and 45-second bonuses, but through slalom flags, each of which doles out a two-second bonus. While initially this is frustrating, it does add tension to the trial, and it's a much better use of slalom flags than simply throwing you out for missing some predetermined and arbitrary number. Initially three tracks are offered, but an additional three can be unlocked by winning races.

1080 Snowboarding is the best snowboarding game around. Control is some of the most involving in racing - check out the impact crouching makes on your turning. If it weren't for the slowdown caused by the onscreen trees - why do designers always go for that one last feature that messes things up? - the graphics would be perfect. Innovative level design and gameplay that requires skill and rewards you for seeing your death-defying tricks through to completion, rather than just knowing the move, add up to one of the best values in both sports and racing gaming. 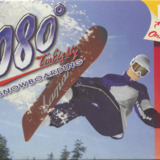