A cast of five famous Bond villains conspire against you in 007 Legends, but the uninspired gameplay is your true nemesis.

Eurocom's 007 Legends is a game about falling. We see it in the way the opening minutes feature Daniel Craig's James Bond plummeting into a river after a friendly sniper accidentally shoots him off a speeding train, and we experience it in the way this latest installment in the long-running franchise reveals a fall from the innovations of 1997's GoldenEye 007 to Legends' tired mimicry of Call of Duty's core gunplay. This is a game that gets to run with Bond's legacy from half a century of cinema and yet stumbles on its face everywhere it should have broken into a sprint. It trips over shoddy AI and laughable stealth mechanics, it slips on boring boss fights and near-absent exposition, and while it benefits from decent multiplayer and challenge modes, these diversions never allow Legends to pick itself back up.

It's a shame, since 007 Legends has some rich source material to work with. Legends' patchwork story draws from iconic films such as Goldfinger, On Her Majesty's Secret Service, License to Kill, Die Another Day, and Moonraker, but with Sean Connery, Pierce Brosnan, and other famous agents swapped out for the dour mug of Daniel Craig, pitifully voiced by Timothy Watson. Some iconic moments lurk about the carnage (including Goldfinger's famed "I expect you to die" speech while a laser threatens Bond's privates), but they feel forcibly stuffed into the humdrum, repetitive levels and their mediocre gunplay. True, there are flashes of fun, such as a firefight outside the gates of Fort Knox, but it doesn't take long to realize that every level invariably involves sending Bond into a famous enemy's lair with guns blazing, using his often anachronistic smartphone to hack or capture data with tedious minigames, and then capping off the level with a quick-time fistfight against the likes of Oddjob or Franz Sanchez.

That's not to say that Eurocom doesn't make a few attempts to add some variety to the gameplay, but they're halfhearted at best, and taken together, they easily constitute the game's worst moments. It's most apparent in Legends' simple stealth mechanics, which consist of little more than crouching and walking quietly, and the failure of the concept becomes all too apparent as soon as you off a thug and realize that you can't do anything with his body. Therefore, the stealth sequences play as though on a timer, with Bond picking off as many enemies as he can with a silenced weapon or his one-hit melee punches before a patrolling guard stumbles across one of the bodies.

In most cases, in other words, you're probably better off just going in with guns blazing anyway. The only complication is that 007 Legends includes mandatory stealth sequences that strip Bond of usable weapons and end in instant failure if he's seen by any guard. That might not be such a bad idea, were it not for the fact that Bond has no way to peek around corners (although he can peek over ledges, provided you can get the prompt to work).

Yet at least with the stealth mechanics, there's still a dash of skill involved. That's why it's so disappointing that the aforementioned fisticuffs are so bland; you can likely go through every one the campaign throws at you without ever seeing an enemy get a hit in. In theory, at least, the ability to use your controller's trigger to avoid incoming blows renders these fights a bit more complex than the average quick-time event, but the prompts to pummel your opponent with the analog sticks last long enough that you're not likely to miss in the first place. Even the most challenging sequences last less than half a minute.

Repeat this scenario for five hours, and you've experienced 007 Legends' campaign. It's an unfulfilling slog, particularly since levels spend little to no time on exposition out of an apparent conviction that Legends' players have seen all the movies anyway, and it's made all the worse by the way the action comes to a dead halt after the Moonraker level. It won't always be thus--the idea is to release the Skyfall episode as downloadable content around the time of the film's theatrical release in early November--but Legends gives you little reason to look forward to capping off this hodgepodge saga. The visuals look as dated as some of the early Bond movies, the enemy AI sometimes runs into walls or fires directly into obstacles, and the frame rate occasionally dives into what feels like the single digits.

If 007 Legends has any redeeming quality, it's in its multiplayer mode. Gone is the tiresome stealthy gameplay of the campaign; instead, this mode has 12 arenas for 8 to 12 players that focus on such Bond-themed objectives as killing enemy players with Goldfinger's golden gun or retrieving data from a downed spy plane, all while capering around as iconic Bond personalities. It's a pity, then, that there's no one around. Only a week after Legends' release, the servers are consistently empty, which makes the return of the beloved four-player split-screen mode from GoldenEye 007: Reloaded all the more worthwhile. Decent, too, is Legends' Challenge mode with its specific objectives, which adds some meaning and urgency to campaign levels that were too dull in their own right.

To say that 007 Legends is a disappointment is to be kind, especially after Eurocom's commendable efforts with last year's GoldenEye 007: Reloaded. Legends could have been a memorable release that reminds us why we've loved Ian Fleming's famous spy for more than 50 years, but somehow it manages to earn its place as what may be the most lackluster Bond game to date. Missed opportunities cower in every corner, ranging from an irreverence toward the subject matter in the disjointed story to the absence of familiar voices, and the gameplay feels like it started life as an amateur Bond-themed Call of Duty mod. The options offered by the multiplayer and challenge modes might entice some of the most devoted Bond fans, but for the majority of players, this seemingly rushed world won't be enough. 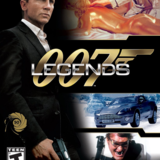