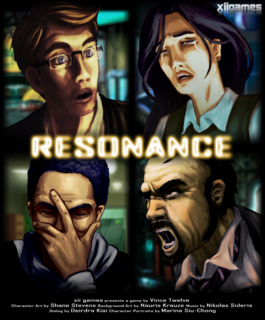 Innovative gameplay with interesting story and hard puzzles for a short time.

User Rating: 8 | Resonance PC
By hostX9 | Review Date: July 11, 2012
Resonance what does this mean to you? If you're a engineer of any sort, from layman to professional then, you probably connect it to physics where you talk about vibrations, sound waves or oscillation. From the a philosophical aspect can resonance be applied to all kinds of things. But we should leave the answer in the game for the player and will focus only on the game experience without telling you anything about the story, this way you can read a spoiler free review.

The game sure has an interesting title and the same goes for the story which is constantly keeping you playing, although it isn't something overwhelming like some other science fiction or fantasy adventure games which need a lot more imagination for making them. But it might be that the developer decided to focus more on the graphic user interface (short GUI) and on the gameplay rather then making an revolutionary story. In fact this could pretty much be the case since the GUI is very unique for a point and click adventure game and consequently puzzles are unique likewise, sometimes even a bit harder then usual. Worth to mention is that there are maximum four characters which you have to use together to solver puzzles like in the good old well known Maniac Mansion. This is a neat feature since there has past a lot of time from the last alike adventure game. But let's get back to the speciality of the game, the GUI. It has two inventories for memories having the same functions and looks just as the item inventory. There are long term memories (LTM) and short term memories (STM). The first are memories of important events which are noted automatically by the individual or multiple characters, whether from the present or the past. The second are memories which you save on your own by drag & dropping an certain object/person from the surroundings to the inventory. Both inventories are used in conversations. When you talk to someone you can choose and make your own conversation options. In other adventure games you usually go talk to a person then go check out a new thing and went back to the same character to get a new conversation option, but in this game you are the one making those options on your own. Sometimes it's practical but usually it's making everything a bit harder because in average adventure games you can use the conversation model for hints but in Resonance you'll have to forget about this.

Some parts of the story appear to be non linear while others are non linear. Which is which is left for the player to discover since we don't want to spoil the experience, but its worth to mention this, since non linear adventure games almost never exist and because of that it's nice to find at least some little spots of its logic in nowadays adventure games.

There are or better to say is a bonus puzzle which can be described as a pain in the back since it's model is based on almost pure guessing, maybe this is also the sole reason why the developer has decided to leave it as an optional puzzle, and if this is true then we can only thumbs up that kid of move. Some puzzles can get you more points when solved in a certain way, so make sure to look for those bonus point but most players won't even care about that. There can be find a lot of different kinds of puzzles which is a big plus and so making the whole game even less easier and more enjoyable to end which can only mean good for experienced players. And talking about experience it's easily to note that Resonance isn't recommended for those who never played a point and click adventure thankfully to its harder puzzles and occasional confusion in understanding how to solve them cause of it's GUI but this occur only on the beginning of the game.

We (at least those who are from the indie and retro gaming rows) also have to thank the developer to be loyal to it's "neo-pixel" graphics! It's giving such a warm nostalgic feeling which constantly reminds you on ye good old days. To the great experience also adds incredibly good voice acting which is quite surprising for a small indie developers being capable of such quality.

The biggest flaw of the game is as in most cases of this genre it's length. The game is too short, period. There could be more of this quality material in it and maybe one day the developer will grow over this weakness. It isn't the first time they have developed a short masterpiece so in the future we expect the same or even better quality with a bit more time to play with, because in the end you quickly forget all the goodness if the whole thing is too short.

At the end we can say this is aneo-LucasArts game when considering the quality of visuals, sound and story. The unique GUI and consequently unique puzzles is making the whole game even better from Lucas although the whole joy won't last for too long since the game is short.
Load Comments (0)