Adventure game specialist Wadjet Eye burst onto the indie gaming scene last year with its engaging game Gemini Rue, which received rightful praise for its creative design. Unfortunately, Wadjet Eye's follow-up effort, Resonance, isn't in the same class in terms of writing, puzzles, and fun. This is a shame because Resonance includes some promising innovations to gameplay for graphic adventures.

For example, rather than simply having an inventory of physical items, characters (you play four different ones throughout the game) have an inventory of memories, too--both long- and short-term. Long-term memories are major plot points that each character has witnessed; these can be recalled for hints in-game (such as remembering a secret knock) or can be used as part of the game's conversation system to discuss memories from a given character's perspective.

Short-term memory is even more interesting, allowing you to make use of items in an area that you couldn't carry with you in somewhat the same way as you'd use inventory items or long-term memories. Want to ask someone about a giant slab of concrete blocking a door? Just drag the concrete into your short-term memory, and you can use it as a topic of discussion or as a way to ask someone for help with moving it. The memory system adds a new way that characters can interact with and make use of their environments and experiences, and such interaction feels much more natural than the usual "combine syrup with cat hair to make mustache"-type adventure game puzzles.

Unfortunately, such puzzles do exist in Resonance, though at the beginning of the game they're no more than a minor annoyance. Once you get past the initial introductory stage and into the meat of the adventure, however, you find yourself controlling four separate individuals, switching back and forth between them to solve some fairly basic, combinatory puzzles. Sometimes you need your group to be together, sometimes you need it to be separated, and sometimes it doesn't matter. And that's confusing.

Solving puzzles is often a question of having the right couple of folks--out of a group of four--in the right place, with the right items on them (they can exchange items, but not memories, with each other). But it's hard to know which people to take with you before the fact. Sure, it makes sense that you should take the cop to the police station, but who else should come with him? Should you take the attractive girl to distract the front-desk guy, or the annoying hacker dude to break into the computers? Mostly you figure this out through trial and error, and lots of it, and that means the middle section of the game takes way longer than it should.

But even in Resonance's better-paced sequences (the multi-character deal is abandoned about three-quarters of the way through the game), there are so many outright nonsensical things that happen that you just can't get involved in the story. Half-baked writing abounds in Resonance, with plot point after plot point relying on silly contrivances (and several outright unexplained occurrences) materializing out of nowhere to move the story along--and then being dropped entirely from discussion.

In one scene, for example, the main characters come upon a note that throws suspicion on one of them, specifically naming him as someone not to trust. This causes the other three to knock him out and tie him up. Later the characters' mistrust is shown to be a misunderstanding, but who left the implicating note, how that person knew this character's name (or even that he existed), and how the note showed up just at the critical moment are never addressed.

Such facile contrivances are also used to create excuses for the characters to solve puzzles in the game, something that's sure to break any sense of involvement and continuity. At one point, for instance, you need to convince a security expert to hand over some files about a vault he built, but he refuses to reveal his clients' private information because of his ethical concerns and his understanding that it might mean his livelihood if his lack of discretion were to become public knowledge.

However, if you can solve the mysteries of some farkakta "puzzle box" that just happens to be sitting in his office, well then you're a kindred spirit, and the character instantly forgets any ethical or commercial concerns and spills the beans. That kind of about-face characterization simply doesn't ring true, even in a genre where you have to expect some contrivances to work in puzzles.

And speaking of characters who don't ring true, Resonance features characters--both primary and secondary--that seem designed to fill some kind of stereotype grab bag. At one point at the beginning of the game, you run into Saul, a vaudevillian caricature of the "New York Jew," complete with a terrible approximation of a Crown Heights accent and a bad case of logorrhea. You get to play as Anna, a Latina who conspicuously pronounces anything Spanish-sounding as Spanish-ly as possible, despite the fact that flashbacks to her childhood show Anna and her family speaking English.

And then there's Ray, the only black character in the game, who trots out the expected "What do you mean 'you people?'" at one point, just in case you weren't thinking about his race for a few minutes. The problem isn't that these moments are offensive, but that they demonstrate the degree to which Resonance's script relies on cliches to fill in for real characterization and personal development.

It's not just the characters, though, that fall flat. Much of the dialogue is also weak, both in and of itself and with regard to how it fits in with Resonance's scenes. One particularly egregious example of this will stick out in your mind: After Anna has witnessed the gruesome and traumatic death of her uncle, she and another character engage in banter that breaks the sense of gravitas Anna's experiences have established and replaces it with a tonally obtuse taste of silliness. This is also one of Resonance's many examples of unnecessary dialogue, which adds little to your enjoyment and just ends up padding the length of the game. Of course, padding the length might well be the plan, because Resonance ends up being fairly short (an experienced adventure gamer should be able to complete it in six hours or less, despite the padding).

The weakness of the writing is a shame in Resonance's case, because apart from that, the game doesn't have a lot wrong with it. Sure, the graphics max out at 640x480 and aren't going to win any 2D animation awards, but the music is solid, the voice acting (with the exception of Saul) is decent, and the gameplay brings several eminently cool innovations to the genre. The puzzles, both the traditional, graphic-adventure ones and the "Professor Layton" ones, are sometimes clever and grow well out of the storyline without feeling contrived (as in one sequence where you need to figure out how to realign a document retrieval device) and are sometimes lame and artificial (as in one sequence where you need to get all your characters through a series of powerful magnets).

But in adventure games, at least, writing is paramount. The mild positives of Resonance are simply outweighed by the major negative of its poor writing. It's both surprising and disappointing that this is the case, given the strength of Gemini Rue, but hopefully the designers and writers at Wadjet Eye will snap back to form on their next game. 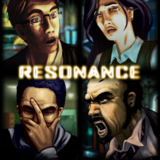 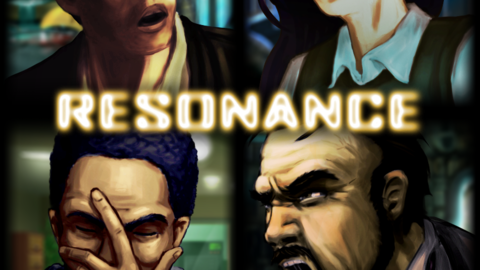 Resonance players will take control of four characters whose lives become entangled in the search for the scientist's vault.