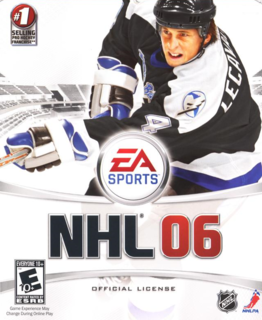 Those familiar with the series won't notice too much new. As a whole, it's still a great game, but flaws still exist.

User Rating: 8.1 | NHL 06 PC
By glassesgeek | Review Date: December 26, 2005
The NHL has been heading down a bit of a bumpy road for the past few years with a lockout fiasco and a slew of new changes to the rules of the game. They’re not alone on this road, however; the NHL series by EA Sports has been on its own bumpy road as each year's game is as unpredictable as Wayne Gretzky’s moves. NHL 06, EA Sports’ latest addition to the series, is definitely an improvement to the series and hockey games in general. However, it seems as though the EA Sports team was meddling in the penalty box during the lockout, considering the minimal changes to the game. Thankfully, NHL 05 was an excellent game and improving upon it, while even in small amounts, made the latest in the series that much better.

Rather than comparing NHL 06 to its relatively identical predecessor, it’s more important to look at what makes NHL 06 a great game on its own. For those who are familiar with the series, the differences will be obvious. For those who haven’t touched an NHL game in years, perhaps the following will open your soon to be sweaty palms to what is easily the best game in the series.

The main focus of any NHL game by EA Sports is to deliver fast-paced action with a stylistic feel molded on top. The new rules in the NHL certainly help promote this ideal with the removal of the 2-line-pass and a decrease in goalie pad size. To help enhance the showy gameplay even more, NHL 06 features a “skill stick” (or for PC users without a controller, an imaginary stick that hovers above your arrow keys), which is designed to make signature “highlight reel” goals as easy as moving your thumb. Wayne Gretzky most likely agrees that a slight movement of one’s thumb is all it takes to spin around with a puck and then ram it down a goalie’s throat. The ease of performing these dramatic motions is what makes the gameplay more enjoyable as you try and fake out goalies with between-the-legs dekes and skate juggling shots. However, these moves, when executed in the right position, can easily defeat any goalie. Once you’ve mastered the skill stick, you’ve practically mastered the game. Showy and exciting, yes. Balanced and challenging, no.

There’s more than one way to skillfully handle the puck; the new Realistic Puck Momentum (or R.P.M. if you care to chuckle) physics implemented in NHL 06 makes the puck quite dangerous. Taking a slap-shot with one of your teammates in front of the net is no longer a wise choice of action. The punishment for a 112 mph slap-shot to the knee is a good 5 weeks of medical therapy. Goalies are vulnerable to the reality of puck momentum as well and can also be sent to the ice from a slap-shot to the face. The puck itself moves quite realistically in NHL 06 and contends well against other NHL titles. Unlike other games, if the puck is moving faster than you are on a breakaway, it will glide ahead of you and could ruin your chances at a shot. This simple implementation brings a world of realism to the game that other games surprisingly lack.

Adding to NHL 06’s realism theme is the long awaited incorporation of a player’s size to speed ratio. No longer can Eric Lindros’ powerhouse of a body dance about the ice without being touched by a defender. Although the idea of making the bigger guys slower and the lighter guys faster is both simple and much needed, EA Sports missed their mark when trying to accomplish this idea. When Mats Sundin, a rather large and powerful forward for the Toronto Maple Leafs, for example, gets fatigued, the man looks as though he’s swimming on the ice trying desperately to even move. These are professional hockey players. None of them are like John Madden swimming on skates while trying to get to a donut. All of the newly instated realism is highly entertaining but also quite irritating at the same time.

The most irritating feature of any EA Sports game, however, is its AI. NHL 06’s AI is founded on predetermined offensive strategies that the computer players do their best to follow. Sometimes, however, they follow them a bit too strictly. If you’re the right-winger and you end up on the left side of the ice, your left-winger is usually not going to change his position to try and setup a one-timer. Frequently, your teammates will get in the way because you are not in the right position on the offensive strategy’s predetermined “map”. Aside from the frustration of setting up logical offensive plays, EA Sports had to instill its most player-infuriating and consistently recurring law: if losing, then score…a lot. Never fear the AI scoring 6 goals in a row on you; it’s only natural with the laws of EA Sports. As a whole, the AI is a disappointment. With the fast-paced gameplay, however, every play and nuisance passes by so fast that there’s never much time to complain, only enough time to survive the game’s inane laws.

You might think that the fast-paced action would discredit the game’s visual presentation. On the contrary, NHL 06 still puts outstanding detail into the rink environment and each player’s facial expressions and overall appearance. Although more time went into the more famed players’ models, each player has realism written all over their jerseys. The animations flow beautifully and, while they mostly animate at above average speeds, appear to be very lifelike and believable from the pulled back camera view. You can feel the pain delivered in each of the checking animations and absolute destruction that takes place on the ice. It’s even more painful to listen to the blissful tones of flesh, pads, and bones all clashing in one beautiful note known as the “body check”.

The sound effects enhance almost every dramatic aspect of the game. When the score is tied and the final minute of the game has been reached, the commentary is more than enough motivation to help lead you to a victorious ending. EA Sports, understands how to create an environment where an intense climax is an understatement when describing the situation. Its fixed AI (yes, we know your ways) and visual/audio enhancements blend nicely on the screen to show the beauty that is competition.

NHL 06 offers a sizable amount of different modes to keep you busy and, like any sports game, makes playing a sport repeatedly more rewarding. The dynasty mode, a mode that lets you take over any NHL team or a team that you create, is the longest lasting and most in-depth of the bunch. It includes the basic operations of any EA Sports dynasty mode that one might expect: scouting, buying upgrades to your team (medical for injuries, coaches for player abilities, etc.), trading, setting practice schedules, and signing as many free agent players as you want due to a nonexistent salary cap. You can simulate years of games and intervene during any period of any game. There is always the option of giving up your day job and playing all 80, of course. Those looking for an even more in-depth approach to the Madden-style dynasty mode had might as well head over to NHL 2K6 on the other side of the ice.

Accompanying the dynasty mode is a net full of other features that help make the great sport of hockey that much more fun. The create-a-player mode also has quite a bit of depth to it and allows you to create just about any face you can imagine (OK, perhaps not Michael Jackson, but we’re talking people here). Created players can be used in any of the other modes and can gain stats like any other NHL star. The World Tournament mode lets you pit teams from different countries against each other in one colossal clash of the titans (or tournament of hockey). The season mode is an even more watered down version of the dynasty mode, allowing only one season to be played without continuing on afterwards.

Those looking for the an entertaining multiplayer experience have come to the right place. The free-for-all mode allows you to find out which of your friends can score on a goalie more…yeah, a tad basic, but surprisingly intense for those with real friends. If your best friend’s name is Larry and he actually doesn’t exist, you may find the online mode enjoyable…that is if your friend Larry enjoys lag. The XBOX Live, PS2 and PC versions all have a common theme of lag included with no extra charge. The online component is actually quite impressive in how it keeps track of your game history and includes a worldwide ladder to compete in. If the gameplay’s frame rate didn’t change as drastically as it does online, NHL 06 would be worthy of a shiny multiplayer Stanley Cup.

NHL 06 brings together a substantial amount of content that forms an impressive package of hockey entertainment. The quality of each individual feature is varied, however. The dynasty mode may offer hours of entertainment, but you have to consider the pain of dealing with certain AI and gameplay issues. When it comes to the gameplay of modern hockey games, NHL 06 is by far the best in both its realism and excitement. You will find that every hockey game series focuses on a different aspect of the sport. NHL 06 focuses its gameplay on recreating fast-paced, intense and memorable hockey experiences. If this is the aspect of hockey that interests you most, get off the bench and get in the game.
Load Comments (0)