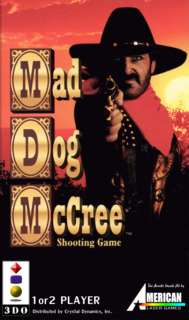 On the Mega CD Mad Dog's awful FMV Quality and simple Gameplay makes you want to avoid the town at all costs.

An Outlaw known as Mad Dog and his gang taken over a small Wild Western town and you who is only known as "The Stranger" has to take Mad Dog down and rescue the Mayor and his Daughter. There's really not much to say about the overall plot along side the cheesy script and dumb acting in-which the first time playing it's amusing to watch for a short while.

You can choose between One or Two Players in which both Players alternately take turns. Select which Controller you'd wish to use from either the Standard Controller, the Menacer or the American Laser Games Gun which works exclusively for this game. Select your difficulty then you're ready to enter the Wild West.

As you start the game you'll be given 5 bottles to shoot for target practice before you start the real game. All you do in the game is watch a little FMV movie and then when a Bad Guy shows up you got to shoot the guy down before he shoots you. You'll also have to watch out for any Innocent Civilians that might appear so mustn't shoot them and because of the games FMV Quality is so badly pixelated that you won't be able to tell if your target you shot was a Bad Guy or not. Whenever you shoot an Innocent Civilians or get yourself shot then you're off to see the 19th Century Undertaker who insults your skills for failing a stage. You get to chose your pathway of what levels you'd like to play including a Saloon or a Bank. Every once in a while there's showdowns that are so Easy to beat, all you really need to do is wait for the signal and then quickly Reload and Shoot. It's mostly easier to do that with the Gun since with the Control Pad you have to aim the Crosshair away from the Game screen which is ridiculous. One of the most major problems that you'll have with the game is the Lousy Hit Detection giving that you need to shoot the right target at the right time before it's too late. Other times you'll be placing bullets all over the target and you won't hit them and even strange is that sometimes the bullets might hit a Bad Guy that's not even close to him. If you're using the Menacer or the Controller then this game is going to be difficult. The Controller on one hand is too slow and you wish there could be a Reload button while the Menacer even when Calibrated it mostly goes off target meaning that you'll keep on missing the target unless you spray bullets like an idiot. Dispute all these problems Mad Dog McCree is a short game anyway, you have unlimited continues and 3 Lives and whenever your Lives are out your score resets to 0. The game only lasts for about nearly over 20 minutes to finish the game but will take longer if you're taking bullets or shooting an Innocent by accident.

If the horrible FMV quality of the Mega CD hasn't done enough damage to your eyes then you could say that the actors don't look to bad at the very least but through mostly forgettable. The acting is terrible which is only good for minor laughs but it can be hilarious when the Bad Guys perform Hollywood style stunts when shot. The soundtrack is decent but there's isn't any during Gameplay and the actors voice work is somewhat passable.