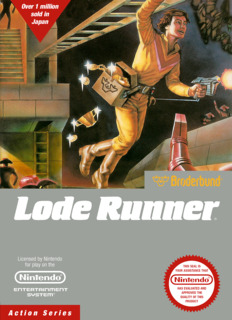 A classic in every sense of the word.

User Rating: 10 | Lode Runner C64
By garey017 | Review Date: April 1, 2008
Lode Runner was a wildly popular platformer/action type game that was first released in the 80's. The player controls a stick figure who must collect all the gold in a level while avoiding the enemies who are trying to catch the player. The enemies are supposedly robots, but you can't really tell with the graphics of that era. After collecting all the gold, a ladder will appear at the top of the screen and the player must climb it to reach the next level. There are 150 levels in the game which progressively challenge players' problem-solving abilities or reaction times. I've played this game an ungodly amount of times, and never beat it. The player can dig holes into floors to temporarily trap robots and may safely walk atop trapped robots. Over time, floors dug into will regenerate, filling in these holes. A trapped robot who cannot escape a hole before it fills is consumed, immediately respawning in a random location at the top of the level. Floors may also contain trapdoors, through which the player and robots will fall, and bedrock, through which the player cannot dig. If you've never played this game, find a way to do so. Don't judge this game based on the new versions that have come out or are coming out, I'm guessing the original is the best.
Load Comments (0)