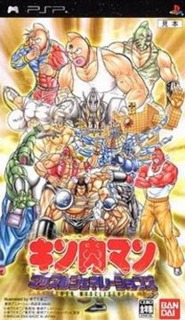 A fun button-masher with a nice collector quirk. Best for fans only, though...

User Rating: 8 | Kinnikuman: Muscle Generations PSP
By Cyclobomber | Review Date: September 18, 2007
Kinnikuman, a highly popular slapstick wrestling series and manga, has had a fair share of games, usually horribly lame and difficult due to rushed programming and lame development... This game is quite different.

Based on the Kinnikuman Nisei series, starring Kinnikuman's son and a new generation of wrestling super-heroes with their fathers, Kinnikuman Muscle Generation was developed by AKI Corp. known for the No Mercy games on N64 or the Def Jam series (recently Def Jam Takeover on PSP). Since they are skilled in wrestling games, the result is more than satisfactory, even if the game feels slightly shallow. But let's procede with method and analyze point by point :

Graphics and Animation :
The game has good looks, with colorful characters faithfully rendered with fine 3D models, quite simple but rich enough to fit the designs, crisp edges and a smooth animation which gives the moves a very lively "muscle flex" feeling that suits best wrestling moves. Facial expressions and over-the-top grapples are fast and flashy, overall it feels like an interactive cartoon. So I'll say "job well done !".

Sound and Music :
Sound and music-wise, the game is a bit less appealing. All the characters retain voices faithful to the original Japanese dubs (though they don't speak much outside their ultimate moves), even the commentators will make comments here and there, but their enthusiasm is a bit underwhelming. The sounds include punches, kicks, grunts, crashes and bonecracks, but nothing outstanding... Honest job at best.
The musics keep an epic-inspired feeling, and the title and ending musics are cool, so the job was obviously carried out better here.

Gameplay :
The gameplay is rather simple, yet demands some practice. You can customize the controls to some extend, but basically it always works the same : you have one hit button (which you can press up to 4 times to make a short combo, one grapple button, a guard button, a jump button, a power trigger (used in conjunction with hit or grapple), and a special trigger. To move, you'll use either the analog nub or the cross, but I prefer the nub, which feels more responsive and less demanding. Apparently the cross (or nub according to your settings) is used to tag in a 2v2 match, but I have yet to figure out how this works... Grapples function in a very simple way. You press the grapple button, then either hit, grapple, jump or guard to perform one of 4 basic moves, some of them throw the enemy in the air or in the ropes to open follow-ups. There are also back throws and air moves (you can also bounce and jump from the ropes).

The more you hit and perform grapples or ground attacks (falling hits or grapples) or your opponent, the more power you'll stack, which will be consumed to perform power hits or power grapples, which also reduce the opponent's power gauge. If your power gets to max, you can press both L+R to try and grab your opponent to perform the ultimate signature move, which is an automatic animation, highly damaging. 2v2 Mode also adds a time-based "tag bar" symbolized by two hands closing in along with time and damage. Once they connect, by pressing L+R you perform a Tag move, which damages both opposing teammates and looks insane. Lots of fun.

Game Modes :
The game is comprised of several modes :
Victory Mode -arcade mode, pick a superhero and battle 7 foes to win. Unlocks collection items and characters.
Battle Mode -free mode, both for vsCom or vsPlayer games, with a BET system offering you to bet your hard-earned toys, to win rarer ones, with your friends. Fight conditions are customizable (duration, rounds, ropes and mat settings, difficulty, venue).
Tourney Mode -A Tag Tournament mode, with tiers and progression, you can watch the CvC matches if you like, too.
Collection Mode -where you can admire all the Kinkenshi toys won in Victory Mode, and unlock extra characters. 32 characters are to unlock, which makes for a roster of almost 45 wrestlers. Now THIS is a very nice touch.

Overall :
This game is not as deep as other wrestling games (bouts are won by putting an opponent's life to zero, period). And the computer is prone to some cheating, but this is common to most button mashers, and DJ Takeover also suffers from this sometimes, so no big deal...
The long process of unlocking everyone and earning every single toy is a real challenge, which will keep you busy for a long time, moreso if you like the Kinnikuman series, because it's all good mindless, ludicrously over-the-top fun, with humourous wrestling maneuvers and good brawling actions. Casual wrestling amateurs or non-fans of Kinnikuman would be better off trying Def Jam Takeover or a Smackdown vs RAW game though...
Load Comments (0)