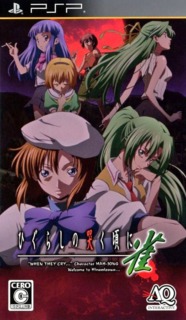 User Rating: 7.5 | Higurashi no Naku Koro ni Jan PSP
By Hidekidi | Review Date: March 31, 2010
Higurashi no Naku Koro Ni Jan (ひぐらしのなく頃 雀 Lit. When the Cicadas Cry "Sparrow") is a Mahjong game created by AQ Interactive for the PSP. Unlike the previous games, this entire story is centered around the popular game "Mah Jong" but has been added a story element by 07th Expansion's Sound Novel game. There are two game modes, the first is "Oyashiro-sama mode" which is the story arc "Paikuzushi-hen" in the Higurashi story arcs centering on a sudden popularity of Mahjong in the village of Hinamizawa and the Hinamizawa Syndrome. In this mode you can only play as Keiichi Maebara. The second game mode is "Club Mode" which allows you to play as the cast of the Higurashi games and this mode is silly and, albeit more easier than "Oyashiro-sama mode." If you have an understanding of Mahjong then you can probably last in the story mode, but if you're no good at then play the Club Mode to get a hang of it first although basic knowledge of the rules of Mahjong are needed to speed the learning curve up. Even though it may never hit the U.S shelves it still is a good import and should kill some time with it's harsh A.I and it's random V.S. mash-ups, this game is a small gem in the rough desert of today's PSP market.
Load Comments (0)