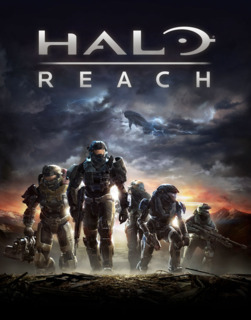 Whether you are a Halo fan or not Halo Reach will satisfy you in every way!

User Rating: 10 | Halo: Reach X360
By syler4815162342 | Review Date: September 15, 2010
To be Honest I'm not fan of Halo because Halo series mostly is base on Multiplayer but Halo Reach has very great camping and powerful story which makes you like it so much.

The Story is about story of noble team, a squad of heroic spartan soldiers, and their final stand on planet Reach, humanity's last line of defense between the terrifying Covenant and Earth.
the story is so dramatic most of the parts, they sacrifice their life's to saving the humanity...

The Cut scenes are very enjoyable, the characters are very badass, all of them are so brave and crazy!

The game has 11 chapters for story mode which all of them are so lovely and great, you will experiment some unexpected missions which are so enjoyable in my opinion.

1-Noble Actual Welcome to reach.
2-Winter Contingency There's a disturbance on the frontier.
3-ONI: Sword base Covenant are attacking a vital ONI base.
4-Nightfall Move in behind enemy lines and evaluate the opposition.
5-Tip of Spear Two Massive Armies Clash! time to go to war against the Covenant.
6-Long Night of Solace Move up the beach and secure the launch facility. take the battle to the Covenant super carrier.
7-Exodus All is not lost. Evacuate Civilians from an occupied City.
8-New Alexandria Provide air support in a forest of crumbling skyscrapers.
9-The Package Your orders are to destroy sword base....or are they?
10-The Pillar of Autumn Deliver Halsey's Data package to the pillar of autumn
11-Lone Wolf Spartans never die. they just missing in actions...
- - - - - - - - - - - - - - - - - - - - - - - - - - - - - - - - - - - - -
Characters biography:

He is one of the Noble team, he doesn't talk too much like every halo characters!

Carter may be the boss, but Jorge is a living breathing death threat. nobody messes with Jorge, also his mom is a scientist!

Good shot. Talks too much, he is master of snipers!

He may say that what he wants is to win the war but what he really wants is for the enemy to die, he kinda has a sick mind!

Slick. Smart, She puts every thing she's got and more into fight, she is really badass girl indeed!

The boss. he knows what it's gonna take to get this done, he is so brave indeed.

I'm not in multiplayer stuff so much but Reach has a great multiplayer which make it so valuable game.
1-Match making which you can go and play on Xbox live

It's about Firefight missions that gradually increase in difficulty as you rank up.
It has 7 game types like Versus... and it has 8 missions like Beach head: fight for prime real estate on the shores of new Alexandria...

It has 12 game types and 9 maps like BoardWalk = 1 Map Variant item/ New Alexandria's Civilian Concourses provide access to rapid transit and views of reach's serene vistas, which you can play it buy your rules....

It's like above options, you can take your party to collaborate in real time to edit and play variations of your favorite maps from to subtle to the insane.