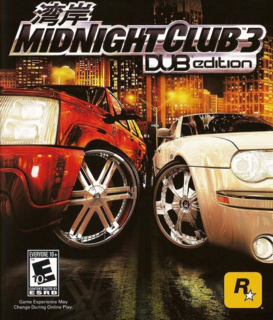 Take a look at some white hot street racing in this trailer.

We do our best to accurately represent the game experience with these movies, and this is one you will see a regrettably large amount of.

Alex Navarro gives his report of how well Midnight Club 3: DUB Edition survived its port onto the PSP.

A Lotus tears up the city streets in this movie.

Take a look at an exciting end to an awesome race in this clip.

A Lexus powers through the competition in this movie.

An underground race hits the city streets in this clip.

Will this Lotus survive such a dangerous flip?

Watch a Mercedes get up on two wheels.

This Saleen S7 is burning up the freeway.

Take a look at skilled driving in this awesome clip. (Only available as a download)

A Red Saleen muscles through traffic in this movie. (Only available as a download)

The online action in Midnight Club 3: Dub Edition is every bit as fast and furious as the offline.

Check out a number of the mods that can be performed on your car.

Ever wondered what it would be like to play Capture the Flag with your car? No? Well check it out, anyway!

Missing a checkpoint can be very hazardous to your race standings.

Alex Navarro gives some clever insight as to why Midnight Club 3: Dub Edition is one of the best street racers available.

Watch this Mercedes rip up the street in this clip from Midnight Club 3: DUB Edition.

Take a look at all the different looks the Evo 8 can have in this clip from Midnight Club 3: DUB Edition.

Take a look at some of the many ways you can customize the look of your Escalade.

Don't miss out on this breathtaking trailer for Midnight Club 3.