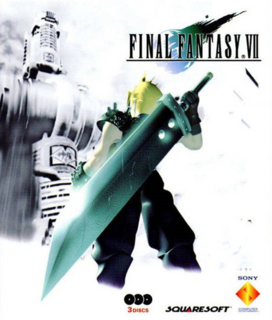 Final Fantasy VII is, without a doubt, the most important tabletop console RPG in history, or at least to date. The game was hailed since its release as it continues to be hailed today. Although I was not even born, I know that people were amazed at the first video game in the 3D franchise, and it's not for nothing, people felt like the future with those sections that it owns.

Final Fantasy VII marked in an important way to almost all RPGs to date, the reasons why and how it did we will analyze it in this review.

Taking advantage of the fact that the game's remake came out recently (and that I don't have money to play it :P) I will review the game for Playstation. I will analyze each section objectively, in order to have a general note that will demonstrate the quality of the game.

Starting strong, I will say that the sound section is perfect, without further detours a 10/10. Without offending the beautiful opera of Final Fantasy VI and later games, I will say that it is in this video game where Nobuo Uematsu composed his best soundtracks. The music is not only beautiful, but it showed a beautiful quality taking advantage of the new mechanisms of the Playstation. The theme of the world map, Jenova, Sephirot, the theme of the bosses, Aeris, Cosmos Canyon, and of course, the final battle, are easily one of the best soundtracks that have been composed in video games (and the rest of the soundtracks are at least memorable).

The sounds of the attack of each character is unique, to which we add what the invocations transmit and you get from the best sound sections in history.

Outside of this, everything visual is great. It does not take a genius to realize that the best of this section are the cinematics. Until then no video game had done such detailed cinematics as in this video game, be they video game cinematics or summons, they look grandly real and impressive. The backgrounds are very detailed, the polygons are almost unnoticeable, and as if not to mention it, it is worth highlighting the design of the characters. Each character has a design that tells you about him, such as his personality and attitudes, a great detail by Tetsuya Nomura.

First of all I'm going to focus more on the few errors, or rather flaws, in the gameplay. Well, the material system, although it is quite original, creative, comfortable and a great way to adapt the "magic" to a utopian setting, make the characters lose individual characteristics. The second and last flaw are the mini-games, which although they are not the great annoyance, they can be.

Outside of this, as I said, the subject system was quite creative on the part of Squaresoft. Although I said that the characters did not show general differences when it came to combat, this is only in the magic section, because physically they do. Aside from each adapting differently on the team, it shows in what ways this may or may not benefit you, some even have long-range attacks as proof of this. I have to clarify that, although I said that the mini-games are quite tedious (and I don't regret what I said), these are short, optional at times, and are there to lighten up so much random combat around the world map.

In short, the gameplay is quite good despite those two flaws that it has that, in the end, does not even overshadow how much they achieved.

The history of Final Fantasy VII is extremely complex. First I want to highlight the very good choice they made with the stage, as it was not only something new and unique for the time (giving respite to both medieval RPGs), but it is the one indicated for telling this type of story. A story that apart from not being afraid to kill characters, touches on topics such as existentialism, utilitarianism, the meaning of life and loneliness (with the added bonus of never being pretentious) together with a plot in order to stop one of the best antagonists of video games, while each character has its conflict and conclusion at the same time as the plot progresses, it is something that makes you fall in love with a work, whether it is video games or not, because such a complex work is incredibly difficult to see in fiction usually. I have no words to describe the good work they did with the plot of the video game, to the point that even the optional characters have a fundamental participation in the plot.

Leaving the plot aside, Fina Fantasy VII has a vast world, with enough secrets to relax you from so much complexity. The level of difficulty is, in my opinion, the best that has been done in a Final Fantasy. The bosses are quite good, and as a bonus there are the secrets, that although they can be tedious to get the reward makes all that time was totally worth it without a doubt (like the knights of the round table). The only bad thing I can say about the section is that sometimes the scenes can last a long time, you can easily spend 30 minutes of pure history without playing. This may be tedious after all, but it is necessary for the story to advance (apart from that they are not bad, but rather very good and memorable).

With all of this in mind, Final Fantasy VII is almost perfect.

In summary, Final Fantasy VII is one of the best options if you want to delve into the world of Final Fantasy, as I am more than sure that most of the fans of the franchise started playing this great game that marked an era. It is without a doubt one of the most important Japanese RPGs of all and a game that I highly recommend to those who like role-playing games. The music is wonderful, the graphics are firm for the time, the setting is innovative as well as the system of subjects, the story is excellent and, in general, one of the best video games produced by Squaresoft. My name is Santiago Aguilar (Guileion) and this was my review, I hope you like it. :)