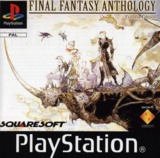 Heading back to the simplicity of the series' origins, but still holds something for the modern Final Fantasy player.

User Rating: 7 | Final Fantasy Anthology: European Edition PS
By Epochend | Review Date: March 3, 2009
These games are a pretty interesting transitional phase for Final Fantasy: still pretty basic in presentation and approach, but hinting at the scope and depth that would emerge from FFVI onwards. This review will be divided between FFIV and FFV, since they're different enough from each-other to warrant it, so I'll try to keep it snappy...

+ Plot: Ok, it's pretty basic by today's standards, but FFIV still deserves mention for setting the series down the path of strong plots and settings. The idea of starting as somone who is arguably a villain was novel at the time (although he mends his ways all-too soon), and those hints of moral ambiguity are nice touches that would usually end up marking the best moments in the series.

+ Expanded World Map: Unless I'm remembering wrong or FFIII included it (I'll never know seeing as they didn't release it on the PS1, grr!), FFIV was the first Final Fantasy to use several layers on the world map, including underwater and more - a nice addition in terms of setting and exploration.

+ ATB: This was the first Final Fantasy to have real-time battles, rather than turn-based, which is another important step for the series.

- Massive Cast: While it's perhaps encouraging that the series was starting to feature more playable characters, the sheer amount of team members who come and go in FFIV is pretty ridiculous, giving you little time to really find out much about them or their back-stories.

- Difficulty: If you thought any of the Playstation games in the series were difficult, you're about to get a harsh lesson in retro gaming! Perhaps it's a good thing that you have to earn your victory, but the game only gets harder as you go along - the final boss will eat you for breakfast unless you're pumped up beyond belief.

+ Job System: I think it was originally introduced in FFIII, but the job system is a great idea that lets you customize your team with impressive depth, and the battles still play out solidly today.

+ World Map Alterations: Without giving too much away hopefully, the world map goes through some fairly dramatic changes through the course of the game, which is refreshing in terms of setting and narrative, and also marks the beginning of a great Final Fantasy trend of re-exploring places you've already seen to find what new things have shown up.

+ Unfurling Story/Characters: While it's slow-going to begin with, the story gets a lot better as it goes along, and the characters eventually turn out to have more depth and personality than those of FFIV.

- Slow Start: It takes a reasonably long time for the story, characters and battle system to really kick off, and you'll have to get through a fair amount of cliche and mindless fighting before things get interesting.

- Difficulty: While it's still tough as nails, for the most part I didn't find FFV as hard as FFIV. However, I found it absolutely impossible to get past a certain point towards the end without the Mighty Guard spell, and I could only find it (in the most ridiculously obscure, hard-to-reach of ways) with the help of a walkthrough; so given that, I'd have to say they should have made it easier!

Just like you could find out if you wanted to play the 2D Final Fantasy games by giving FFVI a try, so the Anthology will let you know if you want to go right back to the game's hardcore RPG beginnings. Of the two, I prefer FFV: while FFIV was more innovative and responsible for a great deal of the good things about the series in the long run, FFV holds up better in gameplay terms, and becomes just as engrossing plot-wise as it goes along. If you're curious to see more of the series' past, and the beginnings of its grand storytelling traditions, I'd definitely give these games a whirl - just be prepared to do a lot of fighting...
Load Comments (0)