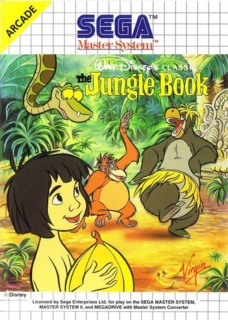 A cute cheesy ride in the Jungle.

Story: The game is based on the book of the same name by Rudyard Kipling. It features the adventures of a boy named Mowgli brought up in the thick Indian jungles by a wolf pack. Although there are minor changes (Mowgli fights Baloo here whereas in the book they were thick friends), you definitely won't be playing this for the story.

Gameplay: As Mowgli you get to run and jump at varying speeds and heights. You collect fruits and other objects which serve as weapons, the most notable being the banana peels. You can knock of creatures either by firing "banana" bullets or by jumping on them. You are required to collect a certain no. of gems (typically 10-15) within a limited time-frame of 5 minutes.This could get pretty frustrating at times since most of the levels are non - linear and you'll be pretty much stuck while finding the last few gems. There are three difficulty levels available which differ in the amount of lives and the no. of shots required to kill an enemy.

Graphics: The graphics are simply great (for the NES that is). You have monkeys jumping, cobras, turtles, squirrels and all sorts of animals you'd find in the jungle. Also, Mowgli's animations are well done.

Sound: There's not much here, except for the sounds heard when Mowgli fires / jumps / lands on surfaces / enemies. The various creatures themselves don't make any noise. The theme music running in the background though is quite cute.

Overall, I really liked this game, even though it borrowed a lot of its basic platformer elements from Mario. I enjoyed it a lot as a child. It is a pity that I had to use an emulator to replay it (my NES was sold out a lng time ago), but nevertheless this is one ride in the jungle that should not be missed.
Load Comments (0)