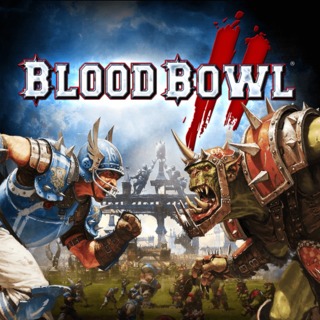 Brilliant at its best infuriating at it worst.

Blood bowl is a turn based strategy game, based on a some decades old board game , roughly based on american foot ball in aesthetics. though actual play I feel leans more toward rugby. set in the war hammer universe.

Blood bowl 2 is the sequal/ remake of the original video game.

Blood bowl 2 is a faithful recreation of the board game. For better or for worse. Nearly every action from running to tackling to throwing the ball involves random chance , via rolling one or multiple 6 sided dice. There are things one can do to mitigate the chances of failure but the fate of even the most well thought out play lays squarely on the luck of the dice. You set up your players. 11vs11 om either side of the pitch(field ) Seting them up in formation manually or via a new handy feature with preset formations . What ensues after is a battle of attrition as is standard fashion you are trying to score a touch down in your opponents endzone while trying to keep them from scoring in yours and vise versa . Moving players next to a team mate offers an assist and advantage . a lone player is more vulnerable than 2-3 stacked next to each other. often times giving perks to the surrounding players. The primary goal is to remove an opponents players from the pitch when ever possible. Every player you or you oppnent loses puts you at a disadvantage . There are many ways to do this. By K'o , injury or even death. Each tackle has the potential to end one of your players careers. The problem with the game play is the randomness of the dice rolling mechanic. As I said even simple actions like running a player into a new postion depends on a dice roll. and an entire and brilliantly though out play can be completely haulted not by an opponent . But because when your player you moved to what should have been a completely safe place gets there a dice is rolled and if outcome means the move failed, your player slips and breaks his neck. And every failure ends your turn instantly. leaving a huge hole for the opponent to run straight through. Things like this happen more often than not and even a simple move can end in disaster causing frustration. And depending on what stage of your play the fail happened can be almost rage inducing as a simple trip up can cost you the who game..

The game has a deep if some what dizzying depth to its mechanics. The more you understand it the better the games you will have. At first it seems daunting . But the addition of the story/tutaorial campaign helps new players ease into the game and get their barings . The tutorial does a good job of showing you the basics but the depth and complexity make the game inaccessable to many players looking for a casual experience as the tutorial will not even come close to preparing for playing online against a seasoned blood bowl vet.

Blood bowl 2 I feel is less of a sequel and more of a visual overhaul. With far higher production values than the original game. The over all presentation of Blood bowl 2 is fantasticly slick and charming. The announcers Bob an Ogre and ex blood bowl star and Jim a vampire Bring most of the charm. With their comentary on the game. The whole presentation makes you feel like this is a sports game set in a fantasy univers. The tv station bringing you the game , Named "cabal Vision " Jim and Bob mentioning messages they get on the anti-social media site Facetomb, or twerper . help to flesh out the game and give it its charm. With a frsh coat of graphics it really helps the game space come alive

Though out side of the story mode. Many of Bob and Jim quips and banter and comentary suffer from the same problem all sports games do.... repetition. With much of the game fallowing suit. All of the races have thier own individual animations for running and tackling ect ect . But the shockingly small number of races compared to other games in the series means the luster eventually is lost . And being forced to sit through these tackling and running replays . slows the game down which is made almost painful after the repetition does set in. The stadiums are well desgind and visually interesting but again the repetition of all the spectators being same faced humans as well as the cheerleaders. gets boring after a while.

As I said the story mode doubles as a tutorial. , Which is one of the best additions to the series. Playing and enjoying blood bowl relies on a deeper understanding of the games complex systems. And each match in the story has you taking the Riekland Reavers on a rags to richs ride, while introducing the games mechanics in an easy to fallow way. The starting missions/games are laughably easy , eventually becoming irritatingly difficult , mostly due to side objectives that must be achived during a match. This is bothersome as certain long time traditional tactics must be used to beat certain teams. And when a side objective calls for you to have to break away from those tactics to say knock out a certain player. while you may achieve that goal , you may fail to score points to actually win the game, score the points and fail the objective , while you may win you are forced to restart the match all over again.

The AI in the game , in some ways is imporved and in other ways a huge step back ward. some games both in story and exibition matches , the AI is suprising competent using tactics that blood bowl vets use regularly and will beat you into the dirt ( aided by some bad dice rolls on your part ) sometimes . While others it feels like the opponent AI is all but trying to throw the game. not protecting its ball carrier . literally running an unprotected ball carrier right up against your very healthy defenive line.

Multiplayer is where the real challenge is at. Though this to is a mixed bag. Sometimes you may play against a player who has just enough of a grasps of the games mechanics and tactics to make the game fun. others, you will play against some one who obviously has never played a blood bowl game and it almost feels like a cheap win . THEN there are times when you will play a game against some who has most likely been playing blood bowl since it was only a board game. They understand the games every in and out and just run over you left and right ( aided sometimes almost magically by the dice being against you) Sucking the fun right out of it. I am not an expert Blood bowler . I do alright. But serieously there needs to be a better ranking system in place for the online multiplayer aspect . As it is no fun playing people who have no concept of the game nor is it like wise playing against people who prolly understand the game better than the people who created the orginal board game.

After coming off of the Blood bowl Chaos edition. The small roster is almost a shock to the system. Chaos edition ( the last offical edition of the orginal game) had 20+ races to choose from , while Blood bowl 2 only has 8. Now I fully realize that most of the roster will be fleshed out with DLC . but they could have thrown us a bone here and made it an even 12 races . With there only being 8 as I mentioned , this really plays into the repetition of the game.

Blood bowl 2 can be a brilliantly fun , deep and tactical turn based strategy game. That is marred by repetition . a fickle AI that dosn't know where it wants to beat you sensless or hand games to you. a multiplayer that needs far better match making options for the sake of balance . and a game roster that was cut in half compared to its former incarnations/ for the sake of selling DLC