We compare the various video cables available for the Xbox 360 for price and picture.

Comments
How you connect the Xbox 360 to your TV could mean the difference between brilliant visuals and mediocre picture quality. If you have an HDTV you're going to want to use component cables to hook up the Xbox 360. For normal televisions, your best bet will be S-Video. Should you have an older-model TV that doesn't have an S-Video input, composite video might be your only option. Lastly, if your TV has only an RF input and you bought an Xbox 360, you probably should have bought a new TV first.
By Sarju Shah

After fighting your way through mile-long lines to get an Xbox 360 system, you arrive home to finally crack open the box and start participating in the next-gen gaming experience. You peek behind your HDTV and discover an ocean of free video input connectors. You think to yourself, "Heck, I've got an open RF connector, I'll just plug the 360 in there and daisy chain it with my NES. What’s the worst that could happen?" Wrong! Even though you have an HDTV, connecting the Xbox 360 to an RF jack could constitute criminal behavior. This finely tuned gaming machine generates graphics at glorious resolutions of up to 720p. In comparison, RF verges on the quality of a Flintstones camera.

Mad Catz graciously sent us its entire Xbox 360 cable lineup for our image quality testing. We're going to show you the visual difference between all these cables on our TVs and monitors, as well as explore the different settings that some displays offer. We used the Sony 60XBR800 HDTV as our test display, along with a Dell P1130 Trinitron monitor. We took sample pictures of NBA 2K6 using a tripod-mounted Canon S400 digital camera. The final images were resized, but the majority of the image quality differences are still noticeable. Hopefully, we’ll demonstrate the benefits of using the right cables--and in some cases, the right settings--for the job.

In terms of quality, consider RF to be your least desirable option. The acronym itself stands for "radio frequency." You probably used an RF modulator to connect your old Nintendo Entertainment System to the television. The modulator device takes in the original signal generated by the game console and outputs the RF-modulated signal to the television. You might be forced to use an RF connector if you have an older television with only an RF input. The Xbox 360 doesn't have support for RF out of the box, nor can you buy an Xbox 360-specific RF adapter, like you could with the original Xbox. Instead, you'll have to spend around 20 to 30 dollars on an RF modulator that converts composite or S-Video signals to RF. However, we recommend getting a newer television instead--upgrading to a used TV that provides for composite or S-Video connections might cost just as much.

In the name of gaming science, we went out and purchased an RF modulator just to see how our 360 looks using the connection. Unsurprisingly, the RF cable offered the worst image quality of all the cable types we tested. Even with our Canon S400, the colors appeared noticeably more faded, akin to a '70s-esque sepia effect. That might look OK if you're taking shots of your friends discoing out to Saturday Night Fever, but it doesn't fly while playing Xbox 360 games. 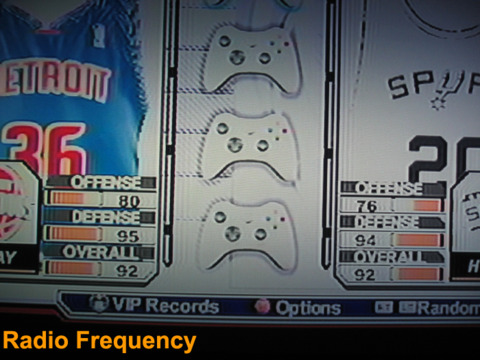 Image details visible with other cables can't be seen in the RF image due to information loss inherent in the signal conversion. One more observation, which we cannot actually show via still pictures, is that the RF cable introduced crawling artifacts into the image. We could literally see pixels shimmering while the screen was paused or set to a single frame. Please shield younger viewers from such horrendously bad image quality; it could corrupt their tiny minds.

You probably recognize the composite video cable as the yellow cable in the white, red, and yellow RCA cable trio. The composite video signal breaks down into three parts (Y, U, and V), but one wire carries them all. The Y signal sends out a monochrome picture that determines brightness, also called luminance. The U and V signals, also known as chrominance, send out color information. Composite video is better than RF, and most televisions should have composite input connectors.

The composite cable offered great improvements over the RF signal in our 360 testing. The shimmering effect disappeared and the image was crisper, with sharper blacks and more vibrant colors. In comparison to the RF signal, it was as if somebody injected all the color back into the picture. Other details, like text and lines, became more visible.

S-Video is the next rung in the image-quality ladder. S-Video separates the video signal's luminance and chrominance into two separate channels, thereby reducing interference. The separation of these two signals yields better color and darkness levels.

S-Video and composite images look very similar, but the S-Video cable produced fine details, a better color gradient, as well as improved brightness, due to the separation of the video signal into two separate wires. The easiest place to see the difference between the pictures is along the edges of the lines. Composite video introduces bumps, while the S-Video image looks quite smooth. 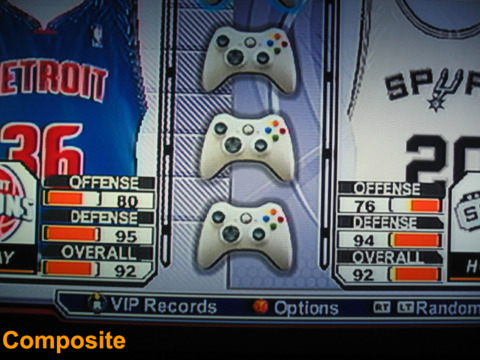 You're going to miss out on a lot if you only play your Xbox 360 on a normal television set. Microsoft mandated that all games on the Xbox 360 be designed with 720p as the reference resolution. In fact, the Xbox 360 renders everything internally at 720p, regardless of what kind of video resolution you use. However, the system will scale the video to the necessary video format. Component video uses three wires to pass the video signal into the television display, and allows for higher resolutions like 480p, 720p, and 1080i. You can actually use old RCA cables in place of real component cables in a pinch, but keep the cable as short as possible to minimize the image degradation caused by an impedance mismatch. The full Xbox 360 system includes a complete set of component and composite video cables. 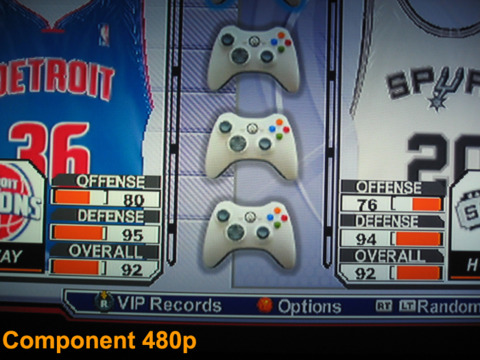 We set the Xbox 360 to 720p and 480p to demonstrate the differences between the two. The result doesn't come as much of a surprise. If you've played PC games for even 10 minutes, you know that increasing the resolution is one of the best ways to make a game look better. Jumping from 480p (852x480) up to 720p (1280x720) gave us a huge increase in image quality. If you don't own an HDTV, do yourself a favor and get some kind of television or monitor that is capable of displaying 720p.

The key message to take away from these pictures - use the right settings. Many HDTVs only run well at one resolution, their attempts to convert to other resolutions result in poor image quality, as demonstrated in these pictures.

If you want to get high definition resolutions but can't afford an HDTV (since you just dropped 400 bones on an Xbox 360), consider getting a set of VGA cables for your 360. The console can output high resolution video directly to a computer monitor if you have the right cables. . By PC standards, 1280x720 (720p) is a walk in the park. Any decently made CRT monitor has the ability to display resolutions of 1600x1200 and upwards. Display size constraints are the only real downside to using a monitor as a gaming display since there's a world of difference between gaming on a 50-inch widescreen HDTV and a 21-inch CRT monitor. 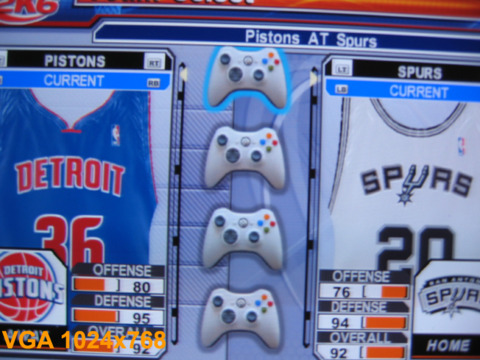 We're not going to compare VGA image quality with the rest of the cables because our 21-inch monitor is far smaller than our HDTV screen, but we can show you the differences between the monitor resolutions. The image quality differences between the two resolutions seem to be minimal. We'd like to attribute that to the versatility of computer monitors. Their ability to display numerous different kinds of resolutions and refresh rates gives them a leg up on TVs.


In our basic tests, we've seen that different cable types can greatly affect image quality. If you're currently using RF, we suggest that you make the switch to a better video cable. The Xbox 360 doesn't have an RF cable option, and it's not worth buying an adapter to create your own. Going from RF to composite video or S-Video produces significant improvements in image detail and color quality. The next major step comes when you move to component video, but the biggest benefits are the increased resolution options and progressive scan output. If you don't have an HDTV, you can buy a set of Xbox 360 VGA cables to turn a computer monitor into a high resolution Xbox 360 display.