We go to Spain to blast Axis soldiers out of France. Sound confusing? It won't after you read our hands-on preview of Call of Duty 3.

BARCELONA, Spain--Call of Duty 2 is one of the best-selling games for the Xbox 360, so it's unsurprising that the follow-up is a featured title at Microsoft's X06 press event in Barcelona. We spent some time playing through one of the single-player levels of Call of Duty 3, and while it doesn't reinvent the World War II shooter, it looks like it's shaping up nicely, with plenty of key differences that should make it worth keeping an eye on.

We started out on a level called Crossroads, where we began slowly inching our way through a decimated French town. Each level has multiple objectives, such as clearing an area of enemies, reaching a checkpoint, or fending off waves of attackers. The mission we played started us at one end of the town, and we had to fight our way through bombed-out buildings, dark sewers, and mangled city blocks to get to the end of the level. There only seemed to be one way to progress to each checkpoint, which made the game feel fairly linear. We reached a few dead ends, but more often than not, getting through the level was as simple as finding the one open door or passage in the area.

The level design in the mission we played offered plenty of opportunities for action. We often found ourselves hiding behind a narrow piece of cover trading fire with several different enemies at a time. Many of the enemies seem to have scripted behavior, so you'll see the same enemies in the same places each time you enter a specific area. It's usually fairly obvious where an enemy will shoot from, because each path you take has some very apparent choke points where you'll find enemies peeking out of windows, from behind low debris, or around a corner. However, sometimes the enemies just rush the battlefield in waves, which makes for a much more frantic firefight than the average shoot-out with a lone gunman. There were several points in the single level that we played where there were a dozen or more enemies doing their best to fill us full of lead.

For the most part, the mission objectives were quite simple, but they displayed a fair amount of variety. In one area, we first had to clear the second story of a house, which was no easy task given the positional disadvantage of approaching from the stairs below. Once cleared, we met up with our three squad mates, one of whom kicked open a door to allow us through to the next area. In a later mission, we cleared a building and reached a balcony where some mounted machine guns were stationed. Using these powerful weapons, we had to take out a tank that was attempting to roll through town. The tank was escorted by a couple of dozen Axis soldiers, though, so we first had to cut them down before moving on to blow up the tank. That's no easy task, though, because a powerful gun like that tends to pack quite a kick, making it difficult to aim.

One of the interesting new gameplay developments that we were able to experience is the hand-to-hand combat. Early in the level, we walked through a door and an enemy soldier lunged at us with a very large and very sharp knife. We deflected his attack and he stabbed a wall, but he quickly pulled the knife out of the wall and began trying to shove it into our soldier's face. We had to quickly tap the trigger buttons to overpower the soldier, and once we got him to a certain point, a button icon flashed on the screen. We quickly hit the corresponding button and were able to kick the enemy soldier away. That didn't stop him though, so he shoved us through a window and we stumbled to the ground where the enemy soldier again tried to lodge his knife into our soft neck tissues. We once again hammered the trigger buttons until another button icon appeared onscreen. After pushing the correct button, we shoved the enemy back through the window we had just been thrown through and shot him dead. It was a fairly long and dramatic fight, but it seemed entirely scripted, so it doesn't look like you'll be able to initiate these types of exchanges on your own. We also played through the sequence twice, and both times the button sequence was exactly the same, so even if your reflexes aren't so great, you can still get through by memorizing the correct sequence. This mechanic felt very similar to the interactive cutscenes in games like Resident Evil 4 and Tomb Raider: Legend. However, witnessing the fight from a first-person perspective did give it an increased sense of danger, because it's not pleasant to stare into the eyes of an angry enemy as he tries to put a knife in your face.

The version of Call of Duty 3 that we played had a few rough spots, but for the most part it looked good and ran smoothly. The level we played featured some welcome variety to the terrain, even though you'll still see more than your fair share of rubble, debris, and dilapidated buildings. For example, to get to one area, we had to enter a house and hop through a hole to get into a sewer pipe beneath the building. We then followed that pipe to another house and came out in the cellar, which was dark and full of huge barrels of wine. Moving up the stairs, we reached the (at one time) living quarters, with a common room that had been blown half away by gunfire. Up the stairs again to the second floor, we reached the bedrooms, which were smaller and offered less cover against attacks, but they gave us an elevation advantage over enemies on the street below. Each area we entered felt unique, but they blended together well, and the design seemed logical rather than simply arbitrary. The lighting effects in the game were impressive. When a frag grenade goes off in a darkened room, you'll see enemies illuminated that you didn't even know were there in the first place. The levels, characters, and weapons are all nicely detailed, as well, to the point that you can read the lettering stamped on the barrel of a rifle when you're aiming. We saw some weather effects in the game, as well. In one area, it was raining, which made the battle feel even more dismal but didn't seem to affect the gameplay in any significant way.

Call of Duty 3 is shaping up to be another intense battle through the rubble and ruin of 1940s Europe. The new hand-to-hand fight sequences are interesting and could offer some entertaining breaks from the shooting. Keep an eye on this gamespace for more details about Call of Duty 3, as well as a full review when the game is released this November. 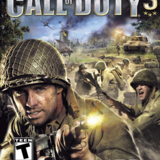