Just do it, Sonic.

Sega has posted a snippet from Sonic Generations with the addition of what is titled the "Shia Lebouf DLC." The video was uploaded on the official Sonic the Hedgehog YouTube channel, and features snippets of actor Shia Lebeouf delivering a motivational speech that went viral.

In the tongue-in-cheek video, which contains spoilers for Sonic Generations, Sonic has been struck down by antagonist Doctor Eggman and is being encouraged by characters including Amy Rose, Knuckles, Tails, and Shia LeBeouf.

Sonic Generations was first released in 2011 and is available on the PlayStation 3, Xbox 360, 3DS, and PC. The game was positively-received in GameSpot's review, praised for how well it blended elements of old Sonic games with new mechanics.

The new video may be a reflection of Sega's intention to re-establish itself as a valuable brand, as CEO Hajime Satomi discussed in an interview last week.

"Sega in the 90s was known for its brand, but after that, we've lost trust, and we're left with nothing but reputation ... We'd like to win back the trust and become a brand once again," he said. Sega has revealed that it will announce "something for home consoles" at this year's Tokyo Game Show.

What do you think of the recent change in Sonic's American promotions? Let us know in the comments below! 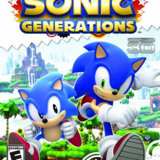