War of the Monsters Preview

We spend some time with Incog's monstrous PlayStation 2 fighter.

Over the last decade, video game consoles have become incredibly powerful machines capable of churning out arcade-quality graphics and deep gameplay. However, despite all the benefits of superior technology, the simple and addictive pleasure of smashing things and leveling cities never does seem to go out of style. Case in point: Incog's upcoming War of the Monsters, which is a destruction-laden brawler with mutated creatures that tower over mortal men. We recently had the opportunity to visit Incog's Utah offices to get a closer look at the game, and we've come away impressed by the promise that the game is showing.

The game's premise is a thin but effective one that owes quite a bit to the B movies of the '50s and '60s, which have clearly influenced its presentation. It seems that in the wake of an alien invasion that was thwarted just in the nick of time, toxic waste that leaked from the wreckage of an alien armada of flying saucers has had some peculiar reactions with just about everything it has come in contact with. As is always the case in a situation like this, a scientist has chosen to use the waste to do experiments, which, not surprisingly, go awry. Earth is soon in peril once again as a crop of fearsome monsters pop up and begin stirring up trouble. Fortunately, the game will put you in the role of one of the aforementioned creatures and not one of the fleeing masses.

You'll find single-player and two-player gameplay modes in War of the Monsters. The single-player component will offer three modes to choose from: adventure, free-for-all, and endurance. Adventure is a linear mode along the lines of your standard story mode. You'll select one of the creatures and participate in a series of battles against the other monsters as well as against boss-type characters. At the end of each fight, you'll earn tokens that you can use to open up more options in the game, such as extra skins for your monster. Free-for-all is a customizable brawl that lets you duke it out against up to three CPU opponents at once. Endurance is a survival-style mode that tests how long you can stay alive when facing a constant wave of enemies. The game's two-player mode also offers three ways to play: free-for-all, elimination, and minigames. Free-for-all lets you and a friend duke it out by yourselves or with up to two other opponents in a property-damaging brawl. Elimination is deathmatch-style mode that lets you work with or against a friend in a four-way brawl against CPU opponents. Finally, minigames lets you play three unlockable minigames--dodge ball, big shot, and crush-o-rama--against a human opponent.

If you're concerned that controlling a massive mutated creature may be difficult, don't lose too much sleep over it. War of the Monsters features an accessible and flexible control scheme that's pretty easy to pick up. You'll move your monster with the left analog stick. The square button will perform a light attack when enemies are near you or fire a projectile attack if they're farther away. Triangle serves as a heavy attack, and X will let you jump. Circle is an all-purpose action button that will let you pick up and throw items, catch objects thrown at you, grab and throw your enemy, climb up the side of buildings, and counter your opponent's blows. The L1 and R1 shoulder buttons will let you strafe right or left when used separately. If you hold both buttons down, you'll be able to lock on to your opponents and move relative to them during a fight. L2 will serve as a free-look button, while R2 will let you block when needed. In addition to your standard array of attacks, you'll be able to perform two types of special attacks. Holding down square and X will trigger a powerful short-range attack, while holding down triangle and circle will fire off a long-range attack. Finally, the select button will let you taunt your opponent. If this default setup doesn't feel right, you'll find other preset configurations to choose from in the game's options. The game's pick-up-and-play control scheme works very well in the battles you'll find yourself in, which can get chaotic.

War of the Monsters' solid gameplay is complemented by the game's impressive presentation, which fits the game's B-movie theme perfectly. Little touches, such as the in-game music, which is a suitably melodramatic score performed by an orchestra, and the fact that the game's menus resemble locations around a drive-in, help set an appropriately cheesy tone. The monsters themselves, though original creations, cover most of the greats from classic monster movies. Our build of the game featured Preytor, an enormous praying mantis; Congar, an angry gorilla; Robo 117, a clunky Western-style robot; Agamo, a flaming rock beast; Ultra-V, a sleek Shogun Warriors-style mech; and Kineticlops, an eyeball encased in a humanoid-shaped energy field. There were three other characters visible on the character-select screen that we couldn't choose--a Godzilla-inspired lizard and two others that were blacked out. Each of the characters is rendered with a high amount of detail and features very smooth animation. The arenas you'll be fighting in are very detailed and reflect the great amount of destruction that can occur over the course of a fight. It's entirely possible to level a city during a brawl because of the freedom you're allowed in the game.

Everything you see can be leveled, and most objects you find can be used as weapons. You'll have to take a bit of care in your battles, though--while dropping a building on your opponent results in an instant kill, it can also take you out as well if you're not careful. In addition to causing straight-out destruction, you can trigger environmental hazards in certain levels. For example, if you're duking it out on the Club Caldera level, you can take the fight into a volcano, which you can fill with lava by slamming certain points inside the crater. The massive and highly detailed levels offer a host of little touches such as pedestrians, which you can step on, and cars racing about in terror, which really fits the mood. Generally speaking, you'll find an impressive array of lighting and particle effects on display in the game as well as very clean textures. A nice perk of the engine is how it switches between full- and split-screen modes on the fly depending on your proximity to your opponent when you're fighting a human player. Best of all, the frame rate stays quite solid in spite of the onscreen madness, which bodes well for the final game. In addition to the game's impressive real-time graphics, you'll find some nicely done CG, most notably in the opening sequence, which captures all the trappings of an old low-budget sci-fi flick to a T.

As mentioned earlier, the audio in the game plays an integral part in selling the whole experience. The game's orchestral soundtrack, full of sweeping scores that are quite melodramatic and very appropriate to the game's tone, is very well done. Ambient sounds in the various levels are equally impressive. You'll hear the hysterical cries of the masses of people fleeing in terror, along with assorted street sounds as you tromp around. The various roars and other assorted cries from the cast do a fine job of capturing their various personalities. The collision and weapon sounds that are heard during fights are pretty satisfying as well. 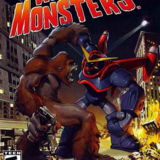