Sega has made a habit of tinkering with its Virtua Fighter series of fighting games, and the latest full installment in the series, Virtua Fighter 5, has been no exception. The original Virtua Fighter 5 debuted in arcades in 2006, with the PlayStation 3 release bringing its second revision to Sony's console in early 2007 and the Xbox 360 edition capturing the game's third revision later that year. Now the definitive version of Virtua Fighter 5 is finally set to follow its predecessors to home consoles.

Sega today announced Virtua Fighter 5 Final Showdown for the Xbox 360 and PlayStation 3 with a summer 2012 release window. Described as an update and expansion to previous versions of the game, Final Showdown will debut as a stand-alone downloadable title on both systems. In addition to new modes, arenas, and customizable character items, the game will add two more combatants to the game's roster. Virtua Fighter veterans will welcome the return of Virtua Fighter 3 sumo wrestler Taka-Arashi, while those eager to try out a new style can look forward to the debut of Jean Kujo.

For more on the original Virtua Fighter 5 console releases, check out GameSpot's reviews of the game on the PlayStation 3 and Xbox 360. For more on Final Showdown, check out the video and GameSpot's extended interview with Sega on the game immediately below.

GameSpot: Can you explain or go into greater depth on some of the changes/improvements that have been made over previous versions of Virtua Fighter 5?

Sega: Since Virtua Fighter 5 was released on the Xbox 360 and PS3 in 2007, the arcade version has received two major updates. The digital release of Virtua Fighter Final Showdown will incorporate all of the improvements the arcade team has rolled out since 2007. Here are the high points.

We've overhauled the core fighting mechanics to make the game more accessible to new players while being careful to retain the trademark depth and balance of the game. Essentially, this consists of two elements. First, changes were made to mechanics, which had a steep learning curve and weren't bringing enough depth to the game; control inputs were streamlined and made more consistent across characters; the throw and escape system received the most notable changes. Secondly, we added enhanced visual cues to the game to better communicate what kind of hit was landed.

Moreover, while the base animation system from VF5 was excellent, further improvements have been made to make the fighters move more naturally, react more convincingly to moves, and communicate better to players when a move is blocked.

We've also added two new playable characters. Taka-Arashi, a sumo wrestler from Virtua Fighter 3, is coming back. And Jean, a karate expert, has been added to the roster.

For the first time, PlayStation 3 owners will have an online Versus mode for the Virtua Fighter series. With little latency, our online mode is already known for being incredibly faithful to the experience players would have standing right next to their opponents in the arcade, and we're glad to bring this mode to all players, regardless of platform.

Finally, we are planning on delivering a large number of downloadable items that will allow players to fully customize their favorite fighters.

GS: What will be included? Are we looking at standard console-version modes?

Sega: Virtua Fighter 5 Final Showdown will introduce a new single-player mode. Besides online and single-console multiplayer, there will also be some modes that weren't seen in Virtua Fighter 5. We'll be talking about those in more detail in the future.

GS: Since online is going to be incorporated, is there going to be spectator or tournament functionality?

Sega: Those modes will not be included.

GS: We're assuming this is going to be a hefty download--any idea on size? Is anything getting stripped out to make it smaller?

Sega: Nothing will be stripped out; this will be a faithful representation of the game that our fans have come to love in the arcade. While I don't have the exact memory footprint today, it should be consistent with other stand-alone downloadable games.

GS: What about pricing?

Sega: We are not announcing the pricing at this time.

GS: Will this version have hooks for downloadable content or tweaks that the team makes?

Sega: Yes, we will support DLC to deliver our fans a massive number of downloadable items that will allow for unprecedented levels of fighter customization.

GS: Is this a simultaneous PlayStation Network/Xbox Live release?

GS: What spurred the team to release the game now?

Sega: While we have received an incredible number of requests from our fans for a home version of Virtua Fighter 5 Final Showdown, we wanted to ensure that we are delivering on the promise of this stellar franchise. You may be aware that the arcade version has gone through several updates and revisions over the past few years. With this in mind, we felt that the game is now in a good place to make its way over to the home consoles. We are very excited to bring what we feel is the best version of the game.

GS: Why go digital only? Was any consideration given to a budget retail release similar to what Sega did with Virtua Fighter 4: Evo on the PlayStation 2?

Sega: As you may be aware, digital distribution is an important part of our overall strategy. The latest generation consoles have made great strides in the digital space over the past few years, and we've seen much success releasing a variety of titles digitally. Aside from our new IPs, we've tapped into our library of classics and arcade hits and brought many of them to our fans through digital channels so that they can enjoy them on current-generation platforms.

Careful consideration goes into our release strategy for every title. We felt that Virtua Fighter 5 Final Showdown is a perfect title to add to our digital portfolio. Releasing the title digitally will allow us to bring the title to our rabid fan base, as well as new and soon-to-be Virtua Fighter enthusiasts, at a great price point.

GS: Final Showdown seems to put a definitive close to the VF5 series of games. Is VF6 something that's being developed?

GS: Is this strictly VF5 Final Showdown content, or will there be an option to toggle gameplay options from previous revisions?

Sega: This is strictly Virtua Fighter 5 Final Showdown content, considered the latest and greatest in the series.

GS: Is there any possibility for a retail release in the future?

Sega: At this time, we are not considering a retail release of this title. 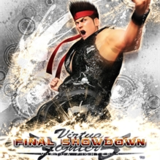