Upcoming Game Aztech: Forgotten Gods Gets A Movie Deal From Get Out Producer

Aztech: Forgotten Gods isn't even out yet and it already has a live-action film in the works.

The upcoming game Aztech: Forgotten Gods isn't even out yet and now it has a movie deal. Developer Lienzo Gaming Studio has teamed with Impossible Dream Entertainment to make a Latinx-themed movie based on the game, according to Deadline.

Shaun Redick of Impossible Dream is a producer on the Aztech movie. He previously produced the Oscar-winning movies Get Out and BlacKKKlansman.

The movie is only just getting started, but the producers will next shop it around to make a deal for production and distribution. In a blog post, lead writer Guillermo Vizcaíno cautioned that movies often take a long time to come together, so you shouldn't expect to watch the live-action Aztech movie anytime soon.

"With Aztech, it's fun to envision what world building can be achieved through the many multi-dimensional characters, the mythology and vast cultural storylines," Shaun Redick said. Producing partner Yvette Yates Redick added: "As a Latina producer and with roots in Chihuahua, Mexico, I am proud to be collaborating with Lienzo, and bringing to light the legends and rich history of Mexico with Aztech."

Forgotten Gods the game is described as a "cyber-stone action-adventure" title that follows the story of Achtli, a woman who is fighting against the Forgotten Gods. "To uncover the truth behind her far-future Mesoamerican metropolis, she'll have to turn the Gods' power against them, as she soars through the city with power and grace using an ancient artifact, remnant of a time long forgotten," reads a line from the game's description.

The game is slated for release on Nintendo Switch, PS4, PS5, Xbox One, Xbox Series X|S, and PC, but a date hasn't been announced yet.

It's just one of many video game movie adaptations in the works. Tom Holland will appear in the 2022 Uncharted movie, while a Tomb Raider sequel is also happening. 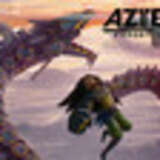