Ubisoft has removed four top developers from the Rainbow Six: Patriots team, according to sources speaking to the GameStop-owned Game Informer magazine.

The site's sources say restructuring at Ubisoft Montreal has gutted the development team on Rainbow 6 Patriots. According to the site, creative director David Sears, narrative director Richard Rouse III, lead designer Philippe Therien, and animation director Brent George have been removed from the project. In a statement provided to the site, Ubisoft confirmed Sears' departure and said the new creative director is Jean-Sebastien Decant.

Rainbow 6 Patriots is currently scheduled to hit the Xbox 360, PlayStation 3, and PC in 2013. It is unclear if the rumored shakeup will have any effect on that release window. As of press time, Ubisoft had not responded to GameSpot's request for comment.

[UPDATE] Ubisoft has confirmed to GameSpot that David Sears is no longer on the Rainbow Six: Patriots development team. Jean-Sebastien Decant is the new creative director. The publisher also provided the following statement regarding the game: "The development team is still hard at work to deliver the next installment of the revered Tom Clancy series, and more details on the game will be revealed at a later date."

Developed by Ubisoft Montreal with assistance from Ubisoft Toronto and Red Storm, Rainbow 6 Patriots will follow the counterterrorism Team Rainbow squad as it tries to put down a group of American insurgents known as the True Patriots. As players look to suppress the True Patriots' budding revolution, they will be faced with "tough ethical decisions," according to Ubisoft. 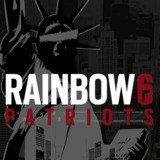