Thirteenth edition of From Software's futuristic mech-combat shooter heads to the Xbox 360, PS3 next month.

Ubisoft isn't making gamers wait long for From Software's next installment in its long-running Armored Core franchise. After announcing Armored Core: For Answer at the end of July, the publisher said today that the high-octane mech-combat shooter will boost onto the Xbox 360 and PlayStation 3 beginning on September 16.

For Answer hopes to once again pique the interest of mech-enthused gamers with a slew of new customization options and combat scenarios. Taking a cue out of From Software's other mech-combat game, Chromehounds, For Answer will feature monolithic mobile fortresses in a series of 10 David-and-Goliath-style boss fights.

The game includes a handful of other features, such as an online co-op mode with 30 missions and eight-player online melees in 80 different arenas. From Software is also giving players the option of beginner and advanced control schemes to ease new pilots into the game.

For answers on what this, the 13th installment in the Armored Core franchise, brings to the table, check out GameSpot's Q&A with Ubisoft associate producer Kenan Alpay. 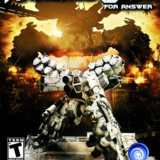