Nintendo announces two more games in the series will be released this April.

The two games will be released exclusively for the Nintendo DS on April 20 in the US, and will--as in the previous two Mystery Dungeon games--let gamers actually play as a Pokï¿½mon creature.

To decide which Pokï¿½mon they want to be, players will take a test to see which of the 16 playable characters suits their personality best, and then set off to explore a land untouched by humans on "an epic journey through time and darkness."

Over 490 different Pokï¿½mon species populate the world, and they will chat to and team up with the player as they battle through a series of randomly generated dungeons. 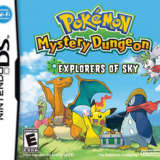