Trials Rising Is Adding Its Longest Track Ever, And It's Free DLC

The Gigatrack is coming to Trials Rising very soon--check out a trailer and get the details here.

The motorcycle racing game Trials Rising is adding some big free DLC very soon. As part of the Ubisoft Forward event, the developer announced that "the Gigatrack" is coming to the game on July 16. The Gigatrack is the longest track in the Trials franchise, and it's meant to test your endurance.

The Gigatrack spans five different environments, and you can get a glimpse at it in the video below. It looks really extreme. Check out the trailer:

Ubisoft Forward is going on right now, and it's expected to bring news about the publisher's biggest games, including Watch Dogs Legion, Assassin's Creed Valhalla, Far Cry 6, and more.

Despite the ongoing abuse allegations at Ubisoft, the publisher did not address them during today's pre-recorded show.

For everything announced at Ubisoft Forward, check out GameSpot's news roundup. 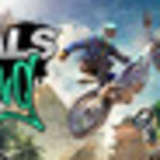