Transformers Prime rolling out this year

Transformers: Fall of Cybertron isn't the only Transformers game due out this year. Activision today announced Transformers Prime for the Wii, 3DS, and DS.

Due out sometime later this year, Transformers Prime is based on the animated television show of the same name. The game lets players control Autobot characters and take part in an adventure to save Earth from Megatron and his new mystery weapon.

Specifically, players will control Optimus Prime, Bumblebee, Arcee, Autobot Ratchet, Bulkhead, and others in the "brawler-style" game with driving sequences. Players will also meet up with and befriend human characters Jack, Miko, and Raf, as they wage their battle to destroy the evil forces of the Decepticons.

Transformers Prime is in development for the Wii and 3DS by Japanese game company Now Production (Katamari Damacy). The DS version is being handled by another Japanese studio, Altron Corporation (Drawn to Life: Spongebob Squarepants Edition). 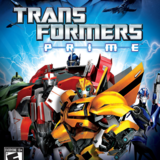