Activision announces that the star of its Pro Skater franchise is going nowhere before the year 2015.

Activision has announced that Tony Hawk, the star of its successful Pro Skater series of skateboarding games, has signed an exclusive multiyear video game licensing agreement that doesn't expire until 2015. The professional skateboarder has been working with Activision since 1998, and the first game in the Tony Hawk's Pro Skater series was released for the PlayStation in 1999. As of March 31 this year, the franchise had reportedly generated around $500 million worldwide, so it's not surprising that Activision is keen to keep the star of its Activision O2 label on board.

"I am very excited to continue my partnership with Activision O2, the definitive brand in action sports video games," Hawk said. "Skateboarding is one of the fastest growing sports today and the video games allow millions of kids to perform tricks and combos that they might not be able to pull off in real life. I've been skateboarding since I was 9 and playing video games for almost as long. It's been awesome watching the phenomenal rise in popularity of my two favorite activities."

"Tony Hawk is not only the undisputed king of skateboarding, he is also one of the most talented athletes in the world today," said Robert Kotick, chairman and CEO of Activision. "He exemplifies the quality and excellence of our Activision O2 brand, and together we will continue to take action sports video games to entirely new levels." 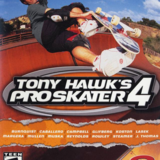