THQ and Heavy Iron's new platformer will give fans of the animated series a whole lot more to love.

SpongeBob SquarePants keeps getting bigger and bigger, and this November Nickelodeon's unlikely cartoon hero will finally receive that which is the birthright of every wildly popular animated series: a big-time animated movie. Last year's SpongeBob game was apparently quite successful, and so THQ and developer Heavy Iron are following it up with a new platformer that's based on the movie. The game, like the film, is titled The SpongeBob SquarePants Movie, and we got to take a preliminary look to see how it's shaping up.

You'd expect the story in this new game to mirror the events of the movie, and you'd be right. In short, SpongeBob and his pal Patrick are trying to get to the bottom of a mystery involving Mr. Krabs, King Neptune's stolen crown, and a whole lot of other strange goings-on. The progression of levels in the game will mirror the progression of events seen in the movie, and the story in the game will of course touch on all the high points that kids (and plenty of adults) will see in the film.

The core gameplay in The SpongeBob SquarePants Movie is similar to last year's Battle for Bikini Bottom in that it's essentially a standard 3D platformer in the style of Jak & Daxter or Mario. Heavy Iron has taken all of the stuff that worked in last year's game and added a lot to it, providing for a much richer gameplay experience in the new game. You'll control both SpongeBob and Patrick at different times (and occasionally, at the same time), and each character will have his own unique set of attack moves.

You can even upgrade all of these moves to make them stronger and add new properties to them by collecting "manliness points," which can be amassed when you pick up items like barbells throughout the game's levels. SpongeBob has a bowling ball throw attack, for instance, and you can add an extra explosive effect to it when you upgrade it. Another of 'Bob's attacks that we got to see was the sonic wave, which has him whipping out an electric guitar (which he apparently plays in the movie) and jamming on a power chord to blast his enemies with sound. When he does this, the camera switches to a first-person perspective so you can get some control over the flight path of the wave.

The game will feature a few other gameplay types besides the standard platforming, one of which is a driving mode where you'll control a giant, motorized...hamburger. The peculiarity of drivable beef notwithstanding, this mode seems to be pretty straightforward: You'll drive the burger down a track while you pick up turbo boosts, avoid oil slicks, and jump off of ramps as you try to collect essential items scattered along the track. There's also a similar sliding mode which has SpongeBob and Patrick riding in a bathtub as it hurtles down a lugelike half-pipe course. Finally, there is a challenge level that has the player simply jumping from block to block over a bottomless pit, trying desperately not to fall from blocks that are also moving and rotating in all directions.

Though it's still early, The SpongeBob SquarePants movie looks surprisingly good from a graphical standpoint. We were told that it's in the top third of all PS2 games for the number of polygons calculated per frame, and yet the game ran at a very smooth frame rate throughout our demo. The character animation is pretty cartoonlike and expressive, and there's a good deal of geometry in use to give everything a nicely detailed look. On the audio side, the game will feature plenty of the actual actors you'll hear in the movie. In addition to the standard assortment of voice-over that fans will be familiar with from the TV series, we also heard Scarlett Johansson doing Mindy's voice in the game.

From what we've seen so far, it looks like this new SpongeBob game will be just the thing to tickle the fancy of anyone who enjoyed the previous game. In addition to all the new gameplay elements, there will be 100 extras--including video clips, concept art, new costumes, and cheat codes--that you'll be able to unlock by finding items hidden throughout the levels, so there should be no shortage of stuff to do in the game. The SpongeBob SquarePants Movie, the game, is slated for release in October, just in time for the release of the film in early November. 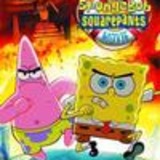