The King of Fighters 2006 Hands-On

We come to grips with the next 3D fighting game in the classic King of Fighters series, which features new characters and modes.

Back in 2004, SNK Playmore finally took that big step with its flagship fighting-game series and made it 3D. Longtime fans were rightfully skeptical of this move, since there's never been a 2D fighting-game series that successfully recaptured its whole look and feel in 3D. And while King of Fighters: Maximum Impact frankly didn't buck the trend, it still did a pretty good job of bringing SNK's popular characters into uncharted territory. Now it seems that SNK Playmore is getting even more serious about sticking with 3D for its fighting games, since the follow-up to Maximum Impact comes bearing the title The King of Fighters 2006, suggesting that this is no longer a spin-off but now an official part of the series proper. We got a chance to play a finished Japanese-language PlayStation 2 build of the game (the game's been out in Japan for a little while) and came away with a positive first impression based on the improvements made to this installment. It seems like it could be a fun, fast-paced 3D fighting game that captures a lot of the speed, personality, and gameplay nuances of its 2D counterparts.

Despite the official title of this game, we couldn't help but notice that the Japanese title screen calls it KOF Maximum Impact II, which is really what it is. This game is clearly derived from 2004's Maximum Impact, since it features all the returning members of that game's cast of characters (including Duke, the powerful last boss of Maximum Impact, who's now a freely selectable character). Of course, there are also a number of new additions to the lineup, including some brand-new characters, as well as a few faces that should be familiar to King of Fighters fans. There's a sizable roster of two dozen different fighters available from the get-go, each one with his or her own distinctive punches and kicks, throws, special moves, super moves, and more. In addition, there are more than a few hidden fighters waiting to be unlocked, including some popular SNK favorites you might not expect to appear in a King of Fighters game. We're talking about folks like Fio from the Metal Slug series and Hanzo Hattori from Samurai Shodown. What's more, you can look forward to some pretty surprising alternate outfits in here..."surprising," as in, characters dressing up like other characters. Imagine Leona with the eye-patch and military garb of her mentor, Heidern. Or Hanzo dressed up as his American-ninja counterpart, Galford. Now, collect the pieces of your exploded head and read on.

The gameplay has also been tweaked out, and allows for some rather complex and punishing combos that link together normal moves, special moves, and super moves for massive damage. Fighters on the receiving end have a chance to sidestep or roll to avoid their attackers, and they can also use parrying moves to make their opponents whiff their strikes and leave themselves open. In practice, the action is fast and furious, resulting in quick, action-packed matches. The feel of the combat is closer to what you'd expect from a 2D fighting game than a 3D fighting game, but some 3D-fighting conventions come into play in the form of juggling combos and ground attacks. Basically, you can keep thrashing your opponents when they're in the air or after they've been knocked down. The fighting arenas are square in shape, so if you can get your foe cornered against the wall, it's possible to dish out even more damage.

The first thing we did when we started playing was bust through the new story mode as one of the "new" characters, the arrogant staff fighter Billy Kane. Of course, Billy Kane has been a mainstay of SNK's fighting games since the original Fatal Fury, but this is this first time he's appeared in a 3D fighter. His alternate outfit puts him in a fresh suit, and he's got all his signature moves. In fact, he seems plenty powerful, since he's fast, strong, and has a long reach. This installment also includes Kula Diamond, the ice-throwing young girl in league with K' and Maxima; and then we've got the brand-new fighters. Luise Meyrink is an elegantly dressed young lady with strange, spiritual powers that seem to summon ghostly butterflies--we can't make this stuff up, folks. Nagase is a spunky ninja girl with Harry Potter glasses and a Hanzo-style spinning pile driver that looks very painful indeed. And, true to King of Fighters form, we can confirm that the game features a cheap, new last boss, though we finally managed to beat him after several attempts.

We noticed that the story mode seems to have more intercharacter conversations and cutscenes in it than the previous game--it's good to see some of the rivalries play out in the story, not just during a match. All the dialogue in this version is in Japanese and delivered by many of the same voice actors you'd expect from previous King of Fighters games. SNK Playmore promises that the US version of the game, which is scheduled for release around August of this year, will feature both English and Japanese voice options. The Japanese language track wasn't available in the original KOF: Maximum Impact for the PS2, so purists will welcome this addition to the sequel.

Apart from the main modes of play, there's also a mission-based mode that packs in some interesting surprises. You'll get to smash up a sport utility vehicle in a throwback to the classic Street Fighter II bonus stage, and you'll even get to take on a scale model of the Metal Slug itself, that crazy tank from SNK's excellent shoot-'em-up series. These missions, along with one-on-one battles involving various special conditions, should help give a lot more lasting value to the single-player game. Unfortunately, you won't be able to seek out competition online. While the Xbox version of KOF Maximum Impact introduced an online multiplayer feature, this next installment is going back to offline-only versus modes...in keeping with the PlayStation 2's track record of not having much of anything in the way of online-enabled fighting games. For what it's worth, the Japanese version has a "network match" mode, but no such luck for North American players.

Thankfully, the action itself moves nice and smoothly, and there's a good amount of detail in the fighters themselves. Likewise, a lot of the sound effects, voices, and music are just what you'd expect from a King of Fighters game. Overall, it doesn't seem as if The King of Fighters 2006 is trying to break the mold of what other fighting games have offered over the years. But by introducing many new fighters and gameplay options to the mix, it's building on a pretty solid foundation and should end up being well worth a look by fans of the series or of fighting games in general. 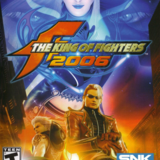