High Voltage's next first-person shooter on the Wii is coming, and we've got a first look.

The Grinder is High Voltage Software's upcoming first-person shooter on the Wii. The game is due for release in 2010, and today we had a chance to see it for the first time at the High Voltage E3 booth to check out its mix of gritty visuals and nonstop action.

Who's Making This Game: High Voltage, the development studio responsible for another first-person shooter on the Wii, the sci-fi themed The Conduit.

What the Game Looks Like: One part Western movie, one part grindhouse flick. The Grinder is taking inspiration from the violent action movies of the 1970s (complete with film-graining effects that add to the game's pulp-fiction roots). As with The Conduit, High Voltage is extracting a good deal of graphical performance out of the Wii with a game that piles up the monsters and lets you blast through them with ease.

What There Is to Do: A short demo level was shown to us, and we didn't get a chance to play it for ourselves. The demo featured the unnamed hero making his way through a dusky town that's been infested by such monsters as vampires, werewolves, and big ugly dudes with axes. You play as a bounty hunter who's been hired by the town to get rid of the monster infestation personally, before the government decides to wipe the town off the map with a handy carpet-bombing (thus eliminating the monsters, but also the civilians). Expect a full single-player campaign as well as online multiplayer, both competitive and cooperative, for up to four players. The game will also have two-player offline split-screen play.

How the Game Is Played: Although we didn't get a chance to try the game for ourselves, the controls look to be similar to that of The Conduit, with the Wii Remote handling the majority of the aiming and turning, the B button for the trigger, and so on.

What They Say: One part first-person shooter, one part Quentin Tarantino.

What We Say: The Southwestern setting makes it appealing, and the shooting action looks responsive. We would have liked to have seen more enemy types; the swarms of vampire enemies, though impressive in number, felt a bit repetitive even in the short demo. That said, the producers are promising more types of enemies, including zombies and horrors (which sound like the creepy burrowing worms from the film Tremors). Considering The Conduit's focus on fast-paced action and lots of customization, it's clear that the team at High Voltage has a vision of what they think first-person shooters can be on the Wii, and we'll be following The Grinder's progress in the coming months. 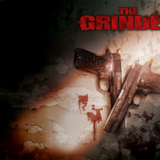